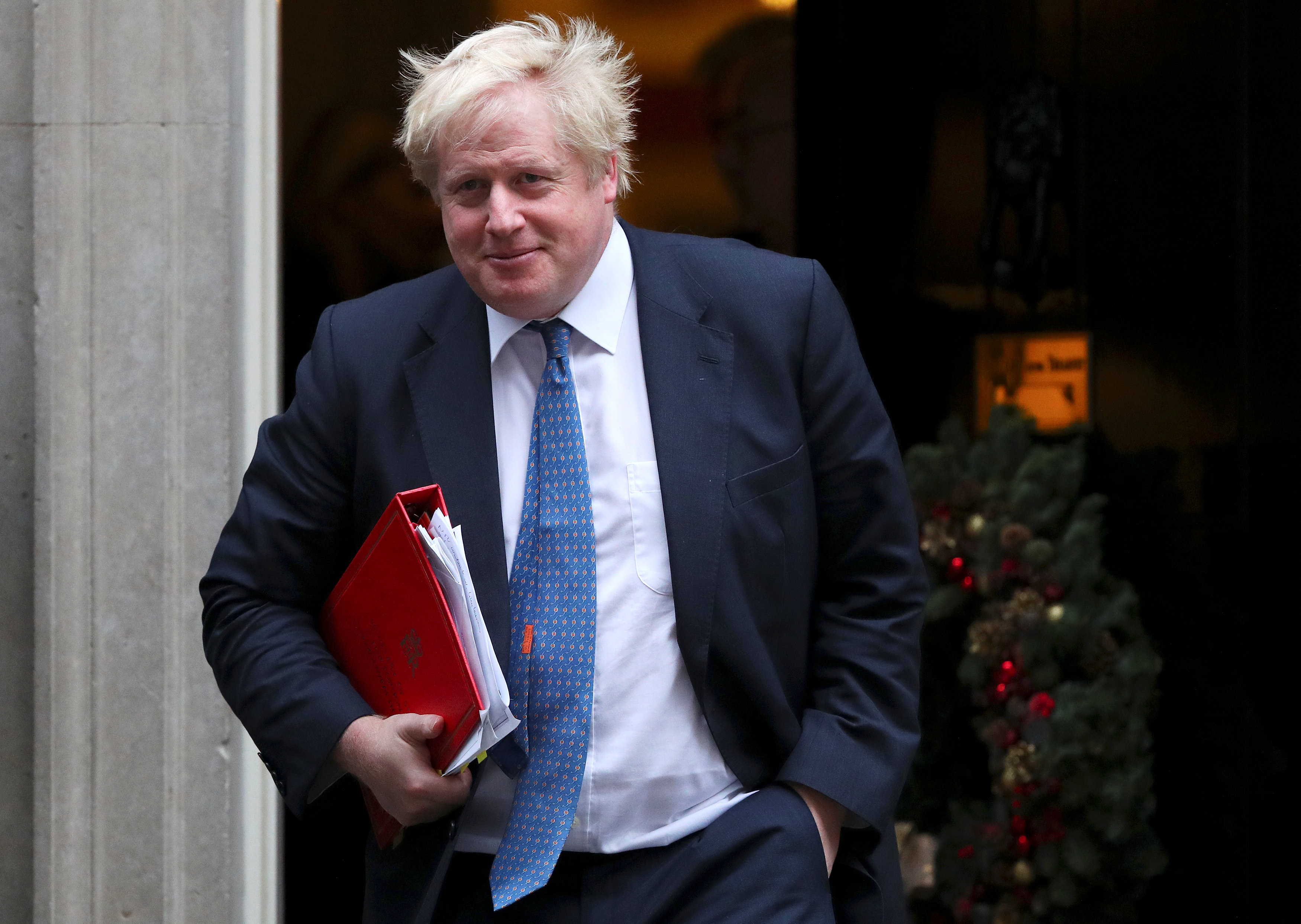 LONDON (Reuters) – British foreign secretary Boris Johnson singled out the Muslim Brotherhood and its associates for criticism on Thursday in a speech calling for a renewed western diplomatic push in the Middle East to tackle Islamic extremism.

Speaking to diplomats and experts at the Foreign Office in London, Johnson called for better engagement with Muslim populations worldwide and argued that blaming Western intervention for the rise of Islamist extremism played into the jihadi narrative.

He said the West needed to collectively re-insert itself in the process towards peace in Syria and called for the United States to bring fresh impetus to the resolution of the Israeli-Palestinian conflict.

Johnson said the Muslim Brotherhood – a global Islamist organization which started in Egypt in 1928 – was one of the most politically savvy operators in the Muslim world, but he also criticized its conduct in the Middle East and Britain.

“It is plainly wrong that Islamists should exploit freedoms here in the UK – freedoms of speech and association – that their associates would repress overseas and it is all too clear that some affiliates of the Muslim Brotherhood are willing to turn a blind eye to terrorism,” he said.

The Muslim Brotherhood in Egypt was designated as a terrorist organization in that country in 2013.

A 2015 British government review into the organization concluded that membership of or links to it should be considered a possible indicator of extremism but stopped short of recommending that it should be banned.

Johnson admitted there had been policy missteps in Iraq and Syria interventions, but said that did not justify a diplomatic retreat from the region.

“British foreign policy is not the problem, it is part of the solution,” he said, calling for a renewed role in Syria, more work to halt conflict in Yemen and progress in bringing factions together in Libya.

“We need more engagement, not less,” he said.

His remarks come a day after the United States recognized Jerusalem as the capital of Israel, drawing international criticism.

British Prime Minister Theresa May has said that decision was wrong, and Johnson repeated the government criticism that the U.S. move was premature.

“We … think that the future of Jerusalem must be settled as part of the negotiated agreement between Israel and the Palestinians and as part of the two-state solution,” he said.

“This decision, having been announced by President Trump, the world would like to see some serious announcements by the U.S. about how they see the Middle East peace process and how to bring the two sides together.” 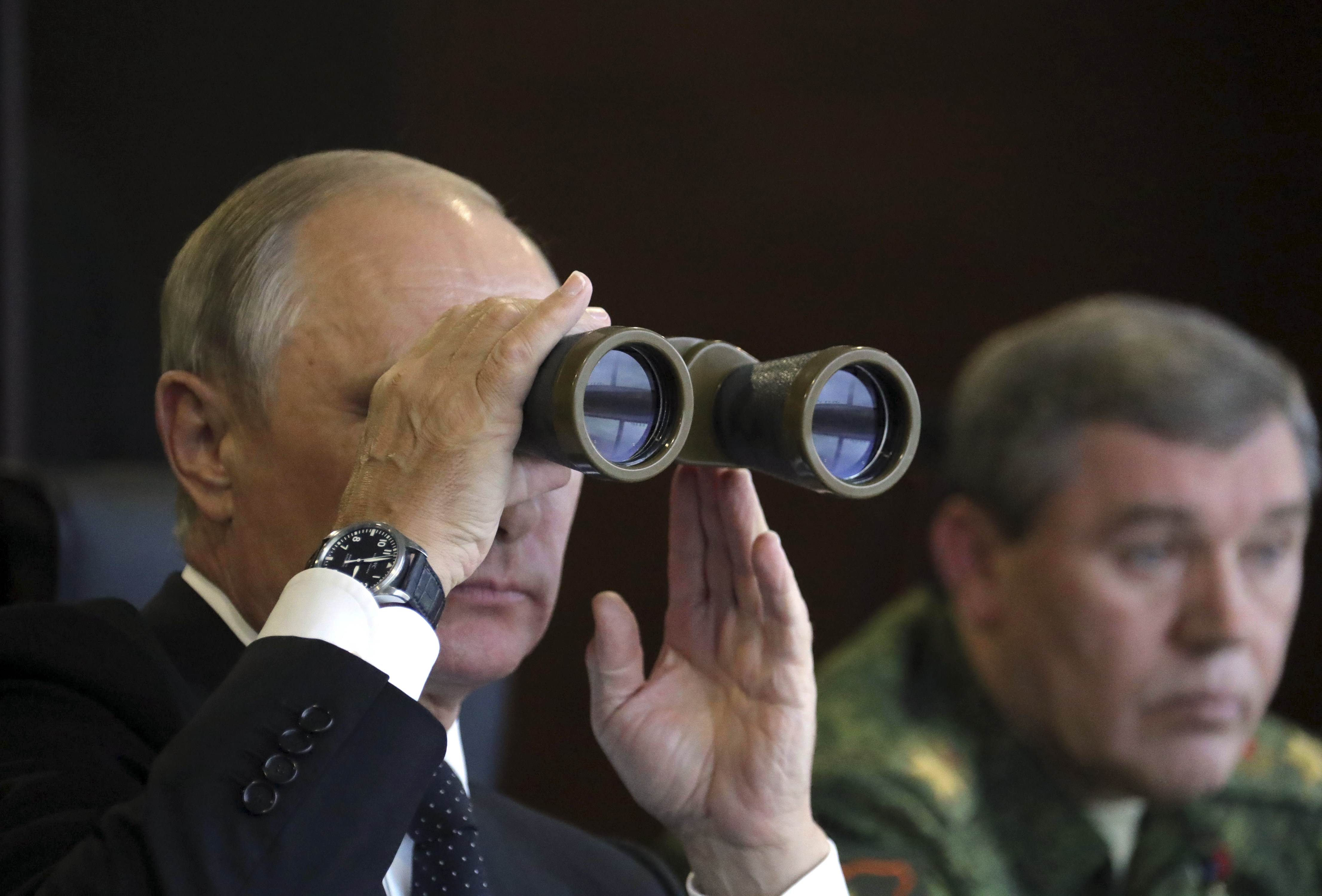 MOSCOW (Reuters) – President Vladimir Putin arrived at a remote army training ground on Monday to watch a military parachute drop, part of Russia’s biggest war games since 2013 that have the West looking on nervously.

NATO officials say they are watching the “Zapad-2017” (“West-2017”) war games with “calm and confidence”, but many are unnerved about what they see as Moscow testing its ability to wage war against the West. Russia says the exercise is rehearsing a purely defensive scenario. 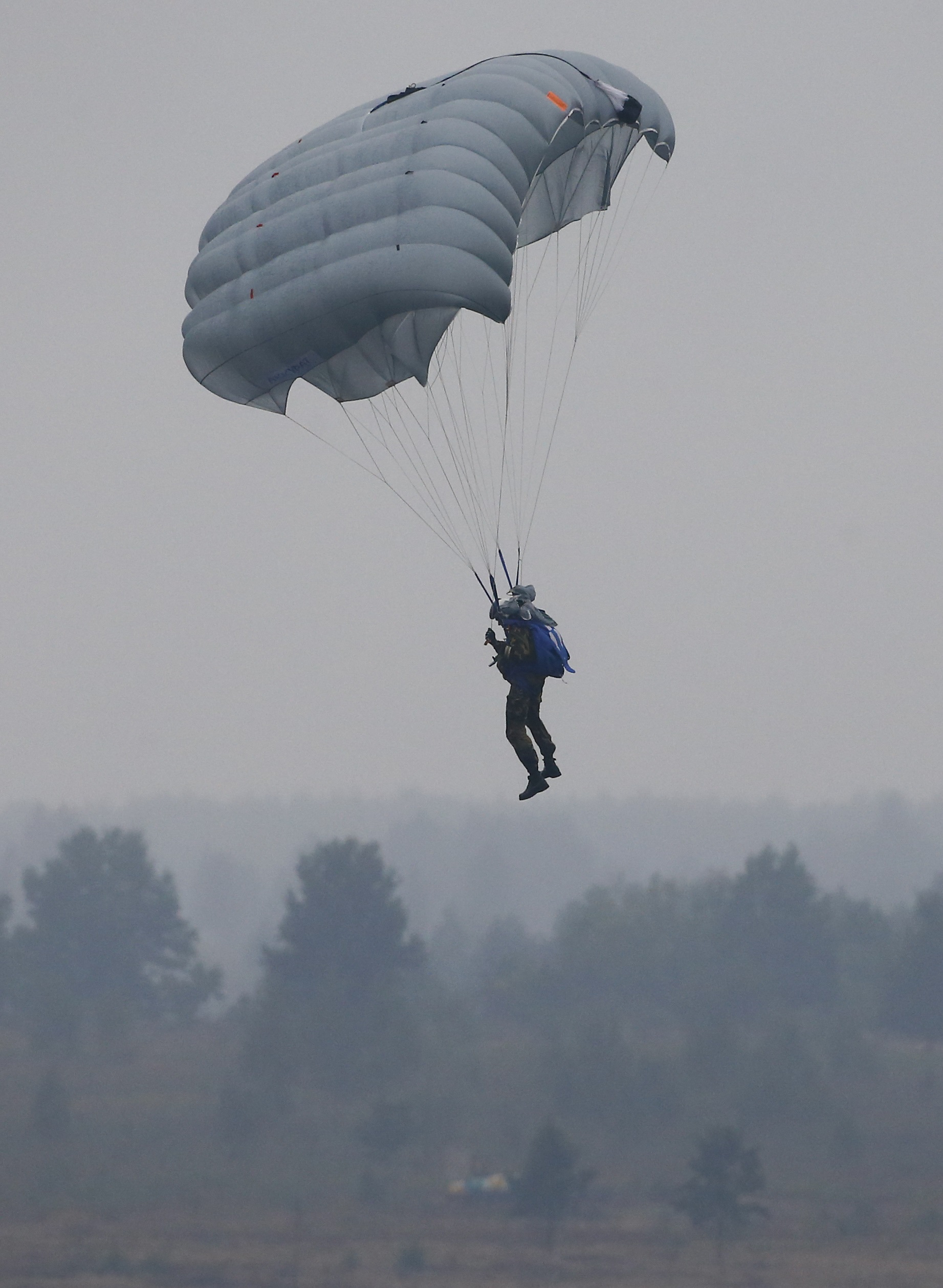 A parachuter descends before landing at a firing range during the Zapad-2017 war games, held by Russian and Belarussian servicemen, outside the town of Ruzhany in Belarus, September 17, 2017. REUTERS/Vasily Fedosenko

The Russian Defence Ministry said Monday’s parachute drop, at a military facility in the Leningrad region, would see 450 paratroopers and nine armored vehicles dropped from military transport planes, a show of military might that is likely to be heavily covered on state TV.

Putin, commander-in-chief of Russia’s armed forces, has often appeared at such events in the past, using them to bolster his image among Russians as a robust defender of the country’s national interests on the world stage.

The Russian leader, 64, has not yet said whether he will run for what would be a fourth presidential term in March, but is widely expected to do so.

Once the paratroopers and their vehicles have landed behind the lines of their simulated enemy, their task will be to wage war against what the defense ministry in a statement called “illegal armed formations” and to destroy their opponents’ vital infrastructure and command centers. 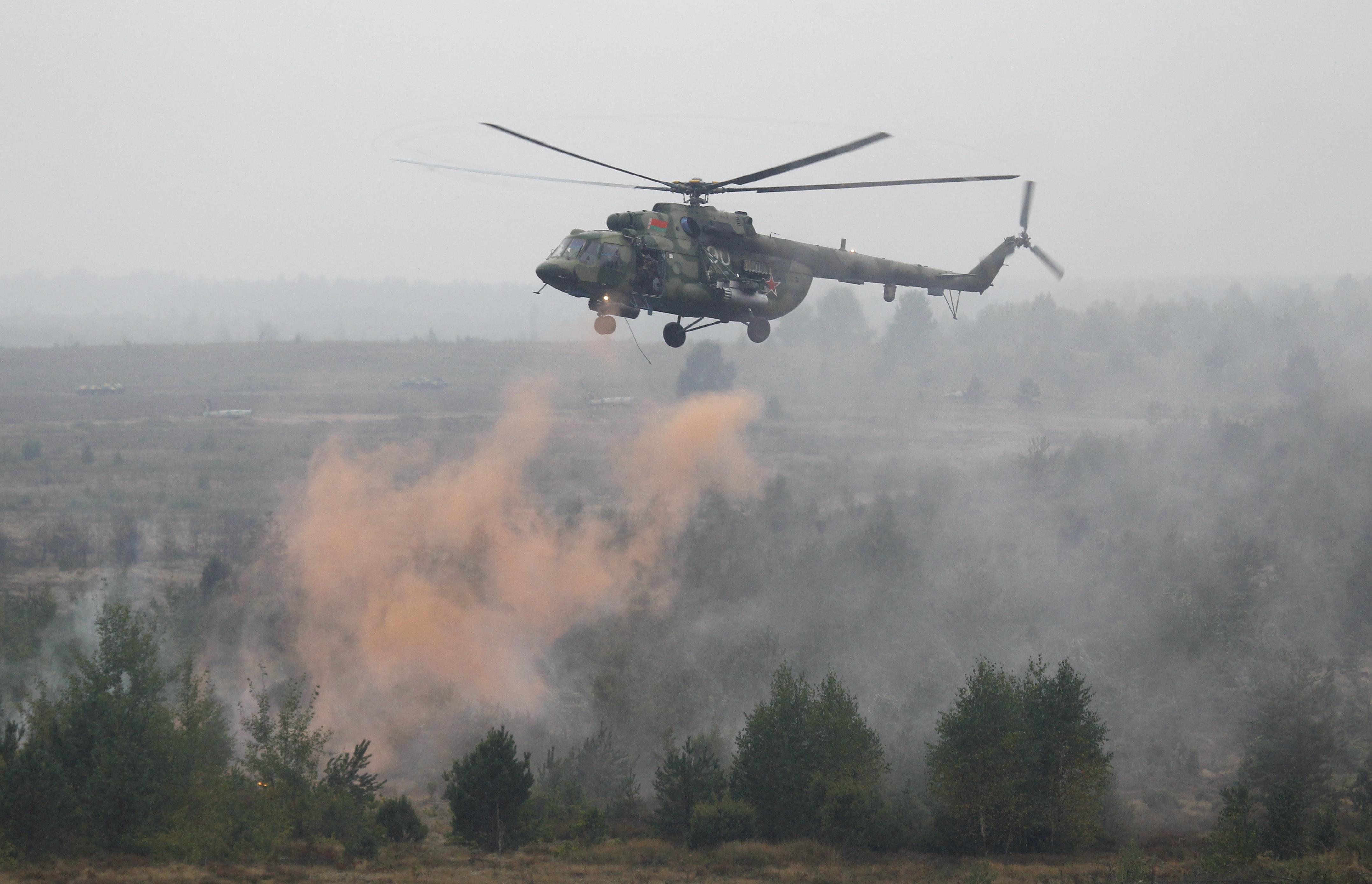 A Belarussian Mi-8 helicopter flies above a firing range during the Zapad-2017 war games, held by Russian and Belarussian servicemen, outside the town of Ruzhany in Belarus, September 17, 2017. REUTERS/Vasily Fedosenko

The over-arching Zapad war games run to Sept. 20 and are taking place in Belarus, western Russia and Russia’s exclave of Kaliningrad.

Moscow says almost 13,000 Russian and Belorussian service personnel are taking part, as well as around 70 planes and helicopters. Almost 700 pieces of military hardware are being deployed, including almost 250 tanks, 10 ships and various artillery and rocket systems. 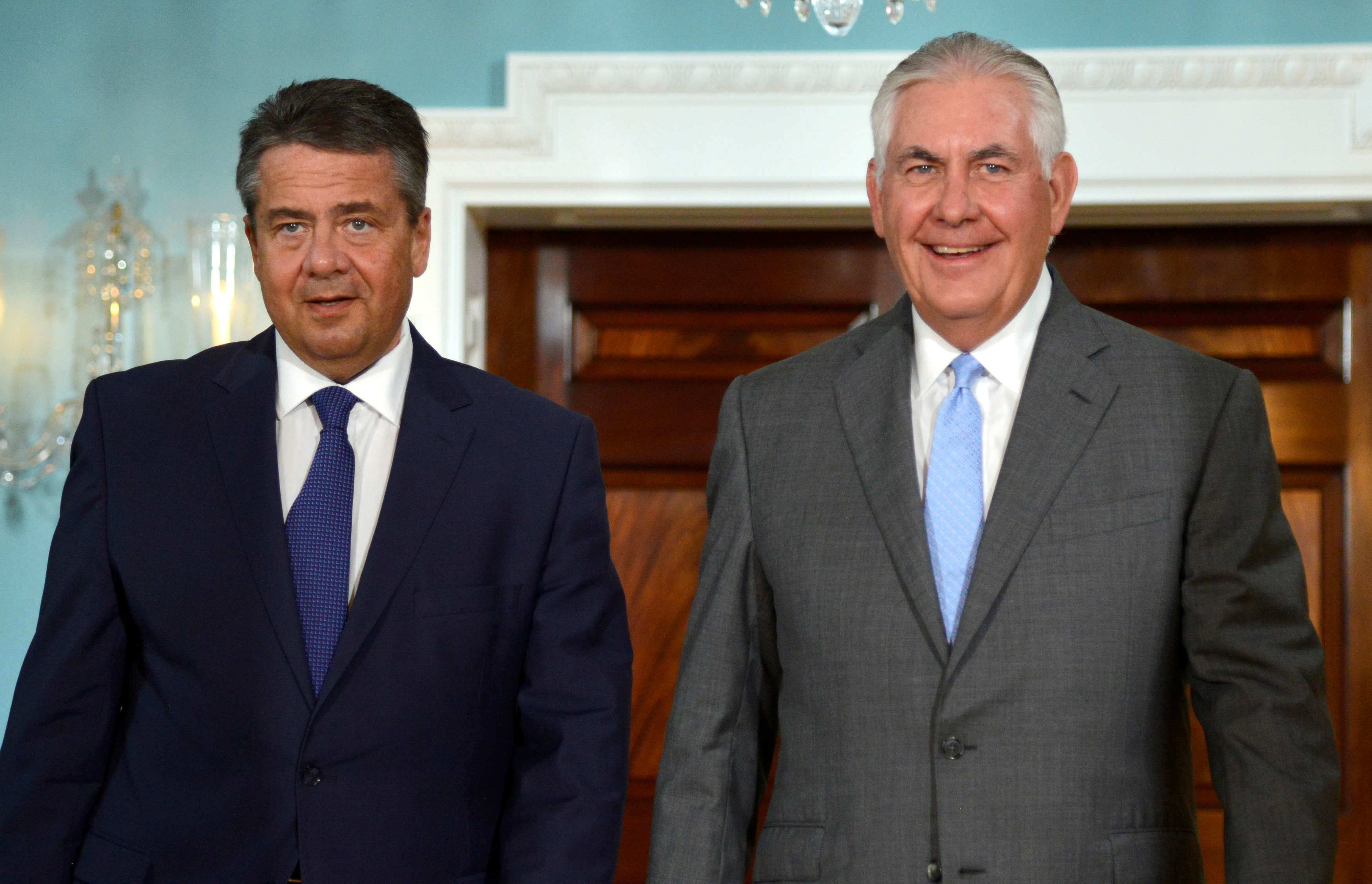 WASHINGTON (Reuters) – Germany and Europe want to ensure that new U.S. sanctions against Russia do not lead to a new “ice age” in ties between Russia and the West, German Foreign Minister Sigmar Gabriel said on Tuesday.

Gabriel said he spoke with U.S. Secretary of State Rex Tillerson about the sanctions in a meeting in Washington, adding that he was grateful that U.S. President Donald Trump had agreed to coordinate on further measures with U.S. allies.

“We as Europeans have great concerns that this will have unintended consequences for Europe. We don’t want to completely destroy our business relations with Russia, especially in the energy sector,” Gabriel said.

Trump this month approved new sanctions on Moscow for its 2014 annexation of Ukraine’s Crimea peninsula and for what U.S. intelligence agencies say was its meddling in the U.S. presidential election, a charge Russia denies.

Gabriel has criticized the United States for the move, saying the new punitive measures expose European companies involved in energy projects in Russia to fines for breaching U.S. law.

Economy Minister Brigitte Zypries even urged the EU to retaliate against the United States if the new sanctions on Russia should end up penalizing German firms.

Gabriel said European leaders were concerned that the latest sanctions would not only have economic consequences, but could also “lead to a new ice age between Russia and the United States and the West.”

Despite European concerns about the sanctions, Gabriel insisted that Moscow must do its part to implement a fragile ceasefire agreement in place for eastern Ukraine, including the withdrawal of heavy weapons.

“That would be a starting point for improved relations,” Gabriel said.

German Chancellor Angela Merkel and French President on Monday called for Russia and Ukraine to increase their efforts to implement the ceasefire agreement.

The conflict between Ukrainian forces and Russian-backed separatists has claimed more than 10,000 lives since it erupted in 2014. Germany and France have tried to convince both sides to implement a peace deal agreed in Minsk in 2015 but with little success so far.

(Reuters) – A major storm packing intense rain and heavy snow and winds will pound California and southern Oregon on Friday and through the weekend, forecasters said.

The National Weather Service said the system is expected to dump as much as 10 inches (25 cm) of rain at a rate of 1 inch (3 cm) per hour in parts of southern California on Friday.

“This looks to be the strongest storm to hit southwest California this season,” the service said, adding that rainfall totals could be the highest in the area over the last six years.

The downpours in heavily populated counties of Santa Barbara, Ventura and Los Angeles where wildfires recently burned could create the risk of mud and debris flows, the weather service said.

“There will likely be widespread urban roadway flooding,” it said. “There will also be a significant threat of rock and mudslides, especially near canyon roadways.”

Rain was also forecast for northern California and southern Oregon, where the weather service issued a flood warning until Friday afternoon.

In areas of higher elevations in eastern California and western Nevada, as much as 2 feet (60 cm) of snow could cause whiteout conditions, forecasters said.

(Reporting by Brendan O’Brien in Milwaukee; editing by John Stonestreet)

West, Texas Mayor Tommy Muska said that 35 to 40 people are dead from the massive explosion that leveled a quarter of the town.

Muska said he arrived at the estimated death toll based on the number of people who have not been identified by local officials. Among the missing and believed dead are six firefighters and four emergency medical technicians. END_OF_DOCUMENT_TOKEN_TO_BE_REPLACED