Pastor Jim & Lori Bakker welcome the Students of Master’s Media as they discuss Healthy Eating on The Jim Bakker Show. 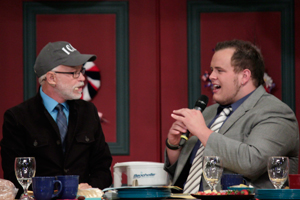 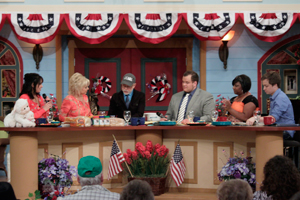 Pastor Jim and Lori Bakker welcomed Master’s Media students Zach Drew, Harmony Hayes, Sasha Volz and James Chapman to discuss the new broadcasting studio and the role the students have played in helping to build it. 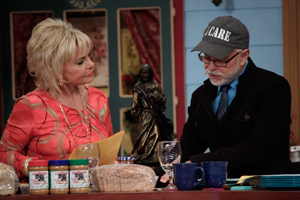 Pastor Jim shared how he took the students on a shopping spree to teach them how to buy studio equipment and supplies on a budget. At the end of the excursion, the Morningside team had a truck and van load of lighting fixtures, anti-static carpet, and other items for the studio and also for Lori’s House. He said he wants to take the money supporters have donated and stretch each dollar enough to make every bill say, “Ouch.” Zach Drew credited the progress that has been made over the past months to the financial donations that many have made to the ministry that have allowed the generationNOW vision to come to life.

Sasha Volz described how the rooms and walls have bright and bold colors. As Pastor Jim said, “The young people need the freedom to express themselves and their creativity in their own ways.” He announced that the official ribbon cutting will take place on July 4th as will filming of the first shows from the new studio. He and Lori excitedly outlined all the events scheduled to take place during the week-long celebration at Morningside, including the official opening of the Wilderness Campground and Shower House. The Pastor called the area a Christian retreat center that will attract numbers of people in the Last Days. He expressed his excitement about letting the students loose to start ministering to their own generation with all the tools of modern technology. His dream, he continued, centers around them eventually becoming part of the Board of Directors and running the entire network. “It is time for this generation to rise up,” he said.

He then went on to present the special bread developed from his ideas, vision and desire to produce an alternative to the bleached, nutrition-less and life-diminishing breads commonly sold in stores. His bread contains salba seed, a natural ingredient grown in Peru that has proven to fight high cholesterol. The bread, made with 10 grains, comes in loaves that weigh more than a pound and contains only a little honey, no sugar, additives or preservatives. As a way to help with the school, Pastor Jim established the Bread of Life Club. Members receive loaves of the salba bread in return for their love gifts, which go directly to cover student sponsorships, scholarships and school expenses.

John 6:35 NIV Then Jesus declared, “I am the bread of life. Whoever comes to me will never go hungry, and whoever believes in me will never be thirsty.

Matthew 24:32 KJV Now learn a parable of the fig tree; When his branch is yet tender, and putteth forth leaves, ye know that summer is nigh: