Pastor Jim & Lori Bakker teach from Jeremiah 1 along with the Students of Master’s Media for Day 2 on The Jim Bakker Show. 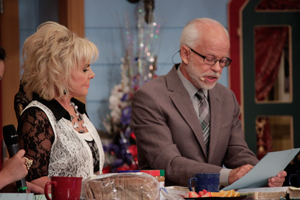 “If I could give a gift besides Jesus Christ, it would be a friend.” -Pastor Jim Bakker 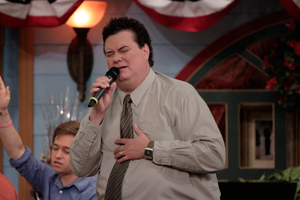 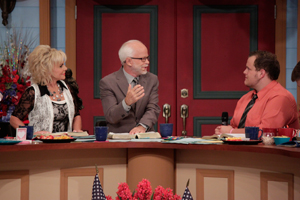 “I really believe God has put me on television to bring a message to the nations.” -Pastor Jim Bakker

“My greatest desire in the world is to raise up this generation.” – Pastor Jim Bakker

Pastor Jim and Lori welcomed musical guest Kevin Shorey and students of the Master’s Media school. The show started with a discussion about the new theme song entitled “Jesus is Coming Soon.” Pastor Jim wanted the band to perform it a second time since the words are often not heard due to the standard introductory message given by the announcer at the beginning of each program.

The current generation, Pastor Jim said, will see the return of Christ, and his role, as prophesied to him at the age of 19, involves helping to usher in the Lord’s coming. He continued by declaring that God wanted him to raise up the Morningside-based ministry as a platform from which prophets could reach the world. He and Lori then announced the lineup of teachers and prophets scheduled to appear on the program this summer. One of them, John Shorey, is on record as saying that a major event will happen before the end of 2012 and Pastor Jim noted his agreement, even saying multiple things are set to occur.

He recalled opening the Bible to Jeremiah 1:1-14, a few days prior to the show, and said the verses he read represented a Rhema, or God word, specifically for him. Jeremiah, in verse six, told God, “I’m only a boy.’ Pastor Jim said he feels like that many times, like he did as a young child who was molested at the age of 11 by a 25 year old man in the church. That violation left him afflicted with things he still battles as an adult: a great lack of confidence and a tendency toward melancholy. Added to that, he was a premature baby and was sometimes referred to, innocently, as an “accident” by his parents who simply meant his birth was an unexpected one.

Returning to the book of Jeremiah, the Pastor noted how God told the prophet he was known and sanctified while still in his mother’s womb, which is another reason acts of abortion are so abominable. Lori bore witness to how miraculous it is to listen to a baby’s heart beating at six weeks old and how that proves that babies in the womb are living beings.

Pastor Jim’s message theme then shifted to restoration and how God restores all things. Both he and Lori know the power of such restoration because both went through major failings in their lives, but came out on the other side repentant and committed to saying “Yes” to God no matter what the command. Cindy Jacobs prophesied months ago that the couple would lead the way in building many things, like Lori’s House and a school. One of Pastor Jim’s primary goals is the stabilization and expansion of the Master’s Media  educational facility from which he wants students and graduates to reach people around the world through use of modern day technology.

With so much building and constructing going on at Morningside, the ministry has set up the Bread of Life and Jim’s Soy Nut Butter Clubs, where supporters receive these food items in return for love offerings or donations that specifically go toward covering student scholarships and expenses for expansion of the facility.

Proverbs 17:17 KJV A friend loveth at all times, and a brother is born for adversity.

Matthew 16:18 KJV And I say also unto thee, That thou art Peter, and upon this rock I will build my church; and the gates of hell shall not prevail against it.

Jeremiah 1:5 MSG “Before I shaped you in the womb, I knew all about you. Before you saw the light of day, I had holy plans for you: A prophet to the nations—that’s what I had in mind for you.”

II Corinthians 12:9 NKJV And He said to me, “My grace is sufficient for you, for My strength is made perfect in weakness.” Therefore most gladly I will rather boast in my infirmities, that the power of Christ may rest upon me.

Jeremiah 1:9-10 MSG God reached out, touched my mouth, and said, “Look! I’ve just put my words in your mouth—hand-delivered! See what I’ve done? I’ve given you a job to do among nations and governments—a red-letter day! Your job is to pull up and tear down, take apart and demolish, And then start over, building and planting.”

Isaiah 49:16 KJV Behold, I have graven thee upon the palms of my hands; thy walls are continually before me.

Isaiah 54:10 NCV The mountains may disappear, and the hills may come to an end, but my love will never disappear; my promise of peace will not come to an end,” says the Lord who shows mercy to you.

Isaiah 54:8 NCV I became very angry and hid from you for a time, but I will show you mercy with kindness forever,” says the Lord who saves you.

Isaiah 54:14-15 NCV I will build you using fairness. You will be safe from those who would hurt you, so you will have nothing to fear. Nothing will come to make you afraid. I will not send anyone to attack you, and you will defeat those who do attack you.

Isaiah 54:17 NCV So no weapon that is used against you will defeat you. You will show that those who speak against you are wrong. These are the good things my servants receive. Their victory comes from me,” says the Lord.