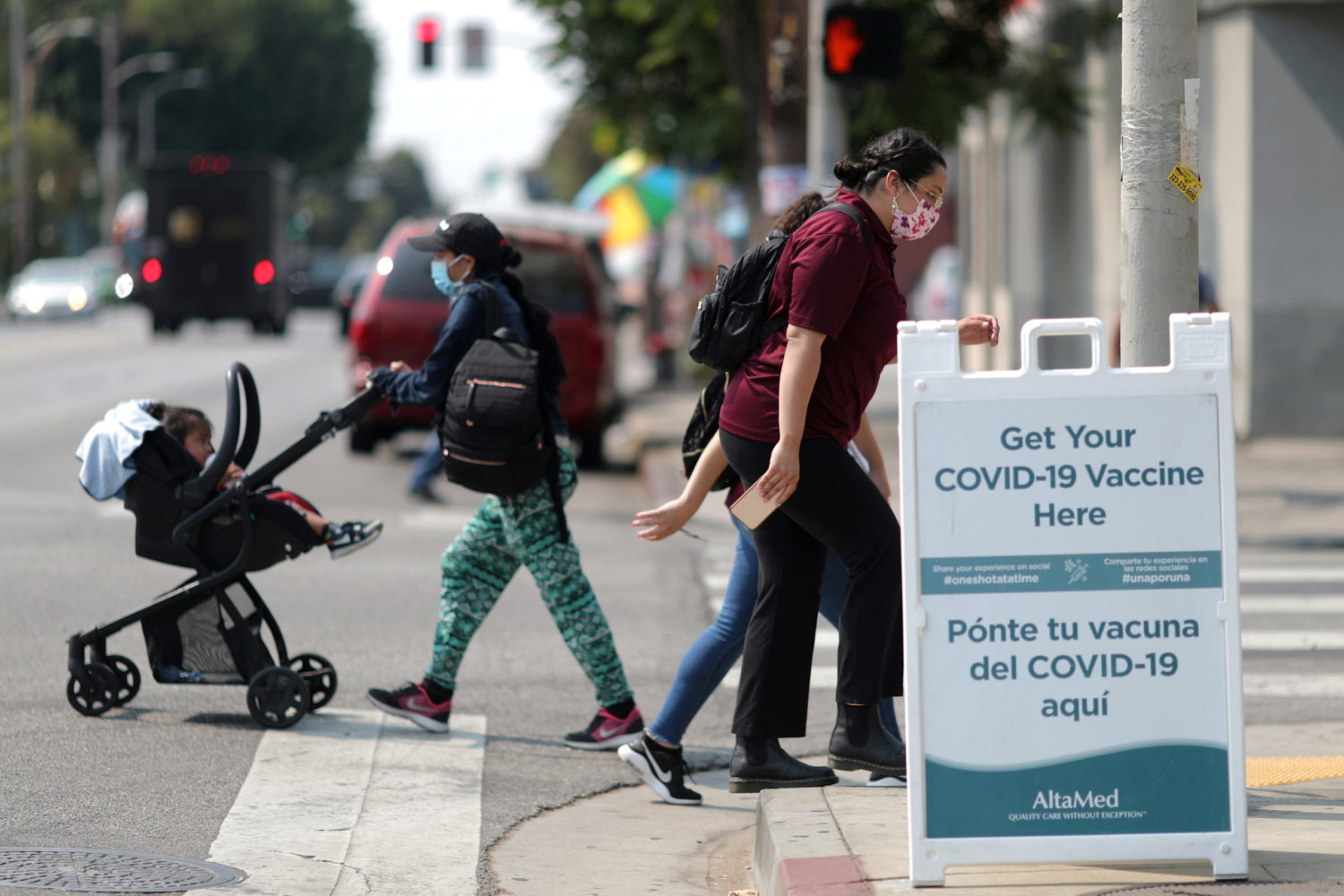 CHICAGO (Reuters) – Some 25% of SARS-CoV-2 infections among Los Angeles County residents occurred in fully vaccinated residents from May through July 25, a period that includes the impact of the highly transmissible Delta variant, U.S. officials reported on Tuesday.

The data, published in the U.S. Centers for Disease Control and Prevention’s weekly report on death and disease, shows an increase in so-called “breakthrough” infections among fully vaccinated individuals.

The CDC is relying on data from cohorts, such as the Los Angeles County study, to determine whether Americans need a third dose of COVID-19 vaccines to increase protection. Government scientists last week laid out a strategy for booster doses beginning on Sept. 20, pending reviews from the U.S. Food and Drug Administration and the CDC.

The vaccines did, however, protect individuals from more severe cases. According to the study, 3.2% of fully vaccinated individuals who were infected with the virus were hospitalized, just 0.05% were admitted to an intensive care unit and 0.25% were placed on a ventilator.

Among the unvaccinated who fell ill, 7.5% were hospitalized, 1.5% were admitted to an intensive care unit and 0.5% required breathing support with a mechanical ventilator.

In addition to the LA County data, the CDC on Tuesday released an update on the HEROES cohort study among healthcare workers that showed a significant drop in vaccine effectiveness among vaccinated frontline workers in eight states who became infected with the coronavirus.

Vaccine efficacy during the period of the study when Delta was predominant fell to 66% from 91% prior to the arrival of the Delta variant, according to the report.

By Andrew Hay and Maria Caspani

(Reuters) – A flyer in Los Angeles’ Carson area, with a fake seal of the World Health Organization, tells residents to avoid Asian-American businesses like Panda Express because of a coronavirus outbreak. A Los Angeles middle schooler is beaten and hospitalized after students say he is as an Asian-American with coronavirus.

And over 14,000 people sign a petition urging schools in the Alhambra area to close over coronavirus risks, even though there is only one case of the virus in Los Angeles County, with its population of 10.1 million.

These are some of the hoaxes, assaults and rumors Los Angeles authorities spoke out against on Thursday to stamp out anti-Asian bigotry bubbling to the surface in California, where over half of the 15 U.S. coronavirus cases are located.

Bullying and assaults of Asian-Americans are being reported from New York to New Mexico, sparked by unfounded fears that they are somehow linked to a virus that originated in China.

With by far the largest Asian-American population of any U.S. state, officials in California are aggressively trying to get ahead of such hate crimes before they spread.

Existing prejudice against Asians has combined with media images from China to create fears that Asian-Americans are more likely to be virus carriers. The discrimination could get worse given chances the virus may spread in U.S. communities in the weeks and months ahead, said Robin Toma, head of the Los Angeles County Human Relations Commission.

Face masks commonly warn by Asians to protect against germs or prevent their spread have become a flashpoint, with wearers insulted or attacked out of fears they have the virus, he said at the news conference.

“We need you to step up and speak out when you see it happening to others,” he said.

Anti-Asian sentiment emerged in 2003 during the outbreak of Severe Acute Respiratory Syndrome, or SARS, which also originated from China. That was before the emergence of social media platforms like Twitter, where racism, hoaxes and slurs get amplified.

The issue is not isolated to California.

New York City designer Yiheng Yu works in an office where many colleagues have recently returned from China and where she and others wear face masks as a precaution.

On one occasion when she wore a mask outside her office she was accosted by a woman.

“She started yelling, ‘Are you Crazy? Get the heck out of here,” said Yu, 34. “I realized it was because I was wearing a mask.”

“I had a staff member who was in the Albany train station and she was coughing a little bit and someone approached her asked if she had the virus,” said Kim, who on Feb. 7 established the Asian American Health Advisory Council to educate New Yorkers about the virus.

“We live in a very fear-driven society as it is, so if we add an extra layer it’s bound to happen, people are going to be ugly,” he added.

“Businesses and restaurateurs have seen a steep decline in their patronage,” Kulkarni said of Asian proprietors. “We only have one case of the coronavirus here in LA.”

(Reporting by Andrew Hay in New Mexico and Maria Caspani in New York; Editing by Bill Tarrant and Leslie Adler) 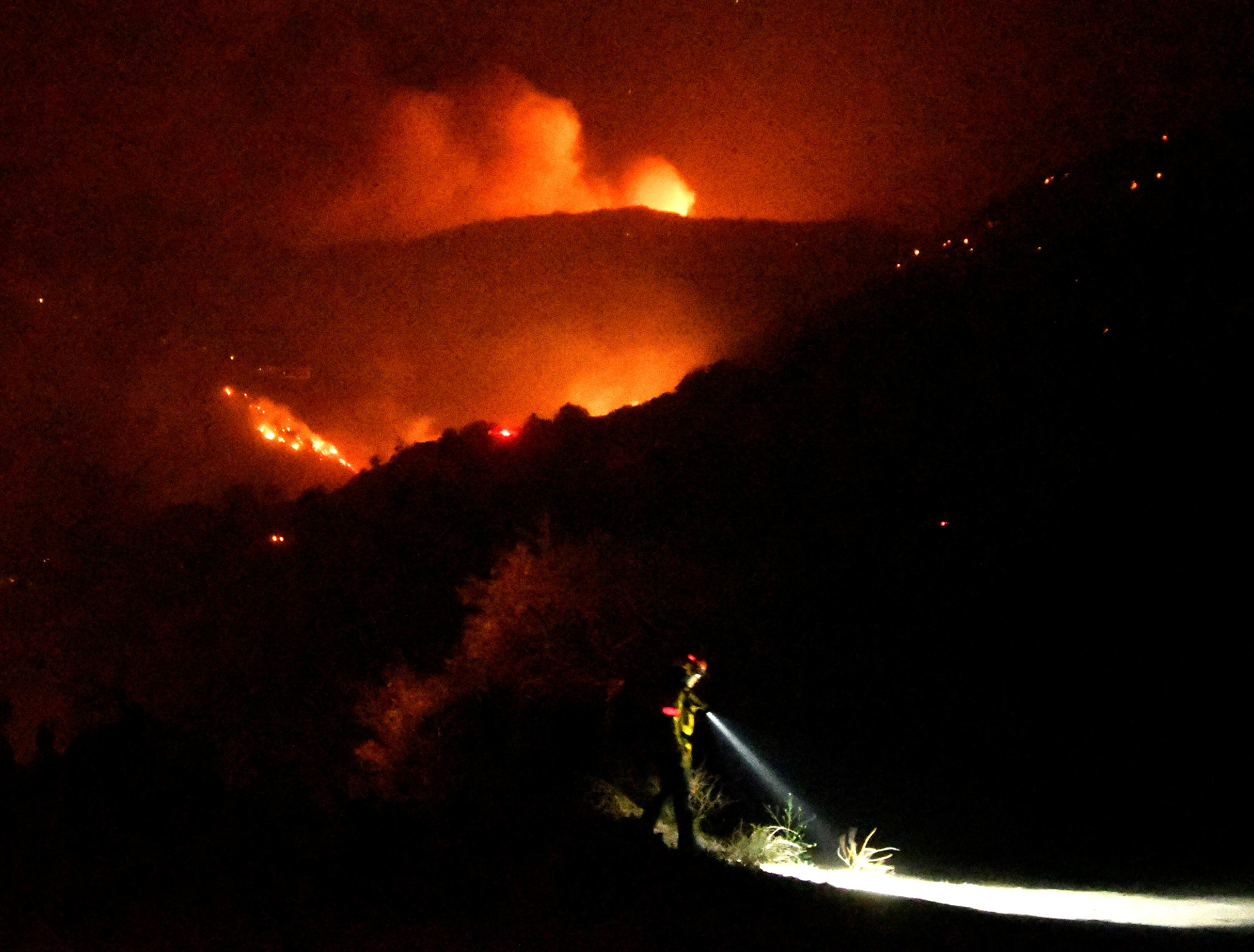 (Reuters) – Thousands of Southern Californians fled their homes on Monday as a powerful rain storm that could cause flash floods and trigger mudslides soaked steep slopes where a series of intense wildfires burned off vegetation last month.

Heavy downpours that could produce more than 1 inch (2.5 cm) of rain per hour were expected through Tuesday evening, forcing officials to order or advise Ventura, Santa Barbara and Los Angeles county residents who live near where wildfires burned to evacuated their homes.

“Recent burn areas will be especially vulnerable where dangerous mud and debris flows are possible,” the National Weather Service said in a statement.

Several December wildfires, included a blaze known as the Thomas Fire which was the largest in the state’s history, burned away vegetation that holds the soil in place and baked a waxy layer into the earth that prevents water from sinking deeply into the ground.

About 30,000 residents were under evacuation orders or advisories on Monday, ABC news reported.

“I’m just tired. I can’t seem to get my life kick-started,” Teri Lebow, whose Montecito, California was damaged by the wildfires, told the Los Angeles Times.

The storm system was expected to produce 4 inches to 7 inches (10 to 18 cm) in the foothills and mountains with 9 inches (23 cm) in isolated areas. Three inches (7 cm) to two feet (61 cm) of snow was also forecast for higher elevations, the National Weather Service said.

(Reporting by Brendan O’Brien in Milwaukee; Editing by Robin Pomeroy)

LOS ANGELES (Reuters) – A smattering of rain and easing temperatures helped more than 1,000 firefighters battling the largest wildfire in Los Angeles history gain the upper hand on the blaze on Sunday, but officials warned that danger remains.

“We’ve turned the corner, but this is not over,” Los Angeles Mayor Eric Garcetti told reporters. “With winds this strong, anything can happen.”

Shifting winds could cause burning embers to spread the fire once more through the rugged northern edge of Los Angeles, said Garcetti.

The nearly 5,900-acre (2400-hectare) La Tuna Fire, named after the canyon area where it erupted on Friday, has destroyed three homes and damaged one. More than 700 homes were evacuated as the blaze tore through thick brush that has not burned in decades. 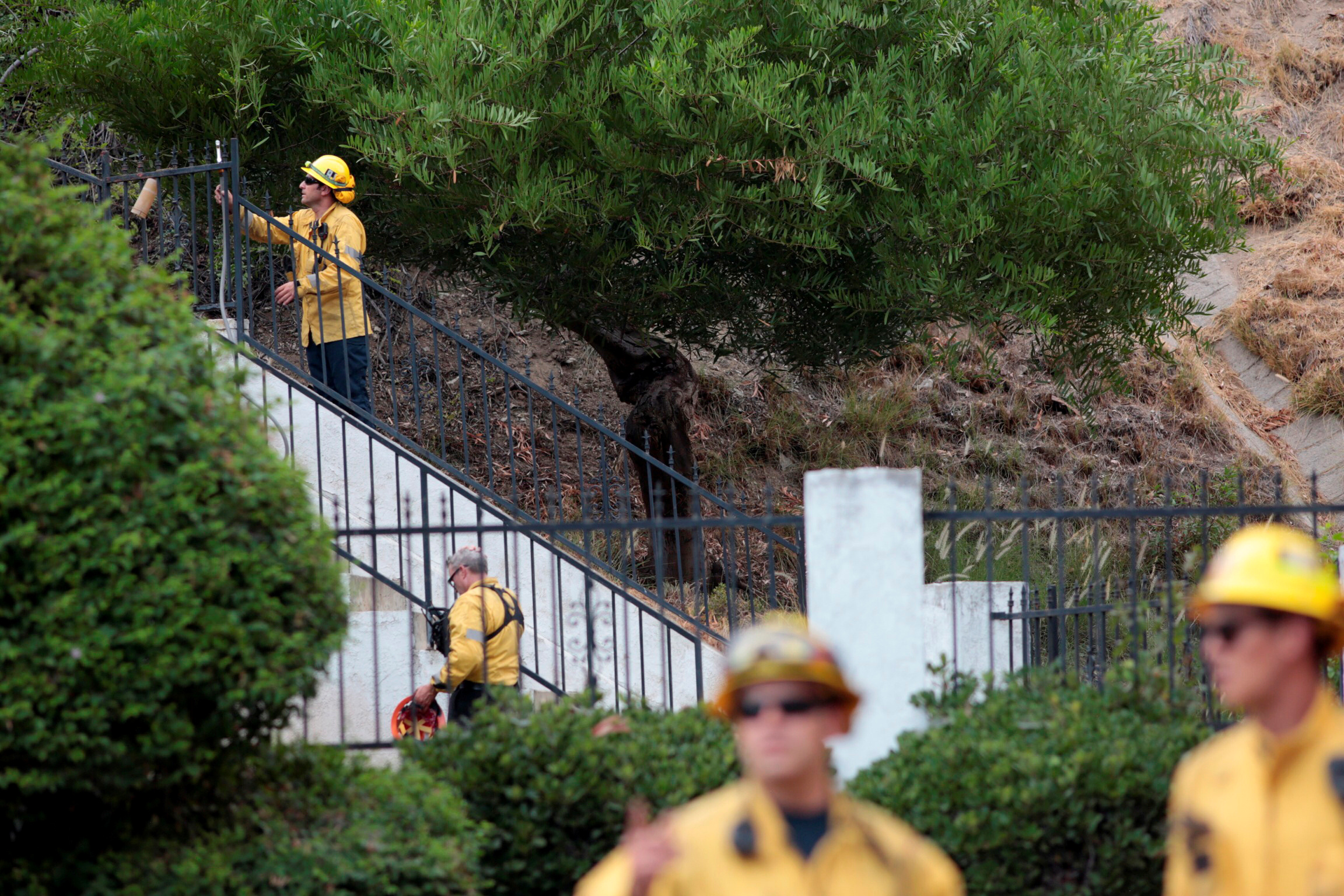 Of the 1,400 people evacuated from their homes, 90 percent had returned by Sunday afternoon and Garcetti said nearly all would be back before the day was over.

The wildfire is the largest in terms of acreage in the city’s history, Garcetti said. It was considered 30 percent contained by late Sunday night, up from 10 percent Sunday morning.

“We do not have this fire contained,” Garcetti said, “but we do have a good sense of, in the next day or two, how we can bring this fire to rest.”

The stretch of the 210 freeway, a major thoroughfare that has been closed for several days, will reopen either Sunday night or Monday morning, Garcetti said.

Los Angeles County, home to 10 million people and vast tracts of undeveloped mountainous land, has suffered much larger wildfires that have burned for weeks.

California Governor Jerry Brown on Sunday declared a state of emergency for Los Angeles County, which will ease the path for state and federal help to fight the fire.

Temperatures in the area have hovered around 100 degrees Fahrenheit (38 degrees Celsius) in recent days. But the mercury was in the low 90s on Sunday, and the temperatures are expected to be moderate and the humidity higher in the coming days, positive signs for containing the fire, said Los Angeles Fire Chief Ralph Terrazas.

More than 400 miles (644 km) to the north, the so-called Ponderosa Fire has burned 4,000 acres, or 1,620 hectares, and destroyed 32 homes in Butte County since it started on Tuesday, prompting evacuation orders to residents of about 500 homes. The blaze was 64 percent contained on Sunday evening, up from 56 percent earlier in the day.