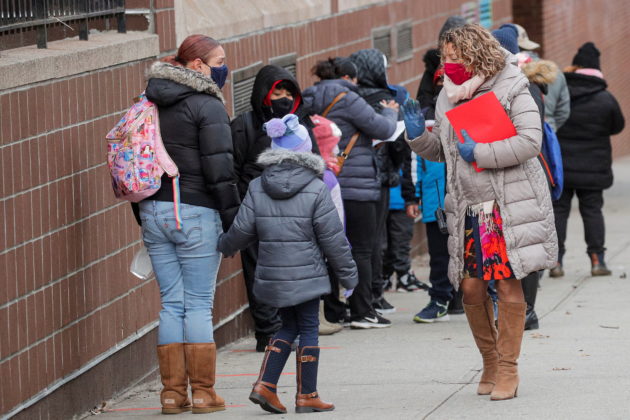 By Brendan O’Brien and Barbara Goldberg

(Reuters) – Educators in major cities including Chicago and Philadelphia on Monday called for strong COVID-19 safety protocols in their classrooms as those and other districts pushed to re-open schools that have been closed for nearly a year.

Across the nation, school reopenings have become a red-hot topic. District officials, teachers, parents and health professionals have been debating when and how to safely re-open schools for millions of students who have been taking classes remotely for 11 months since the pandemic closed schools last spring.

In Chicago, the powerful Chicago Teachers Union was considering the school district’s proposed COVID-19 safety plan that would allow schools to begin re-opening this week. In Philadelphia, educators won an agreement to allow a mediator to decide when in-person learning could safely resume.

If approved, the agreement with Chicago Public Schools, the third largest U.S. district, would avert a threatened lock out by the district, or strike by teachers who demanded stronger safety protocols to prevent the spread of the virus in classrooms.

A deal would allow for some 67,000 students to gradually return into school buildings over the next month, starting with pre-kindergarten and special education pupils later this week.

The union’s leadership is expected to decide on Monday night whether to send its 28,000 rank and file members the district’s safety plan to for a vote on Tuesday.

In Philadelphia, the teachers union succeeded late on Sunday in reversing a district order to return some 2,000 pre-kindergarten through second grade teachers to their classrooms on Monday to prepare for students coming back on Feb. 22.

“There is a lot of uncertainty about the process of re-opening,” said Pennsylvania State Senator Nikil Saval on a Twitter video as he protested with Philadelphia teachers outside his child’s school. “We want an eventual return to schools but only when it is safe … for teachers and students.”

The Philadelphia Federation of Teachers on Twitter cheered the city’s concession to allow an independent arbitrator to decide when the district can safely resume in-person teaching.

“The mediation process is still ongoing,” the union said on Twitter.

U.S. President Joe Biden on Sunday addressed the issue on Sunday, describing school closures and their negative impact on families as a national emergency.

During a Super Bowl interview on CBS, Biden said it was time for schools to reopen if they can do it safely, with fewer people in classrooms and proper ventilation.

“I think about the price so many of my grandkids and … kids are going to pay for not having had the chance to finish whatever it was,” he said. “They are going for a lot, these kids.”

Leading health organizations, including the Centers for Disease Control and Prevention, have said there is little evidence that schools contribute to the spread of the virus, which has killed more than 460,000 people in the United States since the pandemic began.

In Michigan, more than 350 physicians and psychologists signed a letter to Ann Arbor Schools officials urging the resumption of in-person classes by March 1. They warned of the “harmful impact of delayed school reopening on our community.”

Dr. Kim Monroe, a pediatrician who helped organize the Michigan effort, told radio station WEMU, “We are seeing so much mental illness in children due to the virtual schooling.”

A gradual re-opening unfolded in Atlanta when third through fifth grade students went back to school on Monday after prekindergarten through second grade returned to schools on Jan. 25.

In New York City, in-person classes in the nation’s largest school system will resume for middle school students on Feb. 25. About half of the public school system’s 471 middle schools will offer five-day-a-week classroom learning with the remainder working toward that goal, Mayor Bill de Blasio and Schools Chancellor Richard Carranza said at a press briefing.

“If we’re in an environment where the city is overwhelmingly vaccinated, we’re able to bring school back as it was. Same physical proportions. Same number of kids in classrooms,” De Blasio said, adding he hopes to have all schools back to full-time in-person learning in the fall.