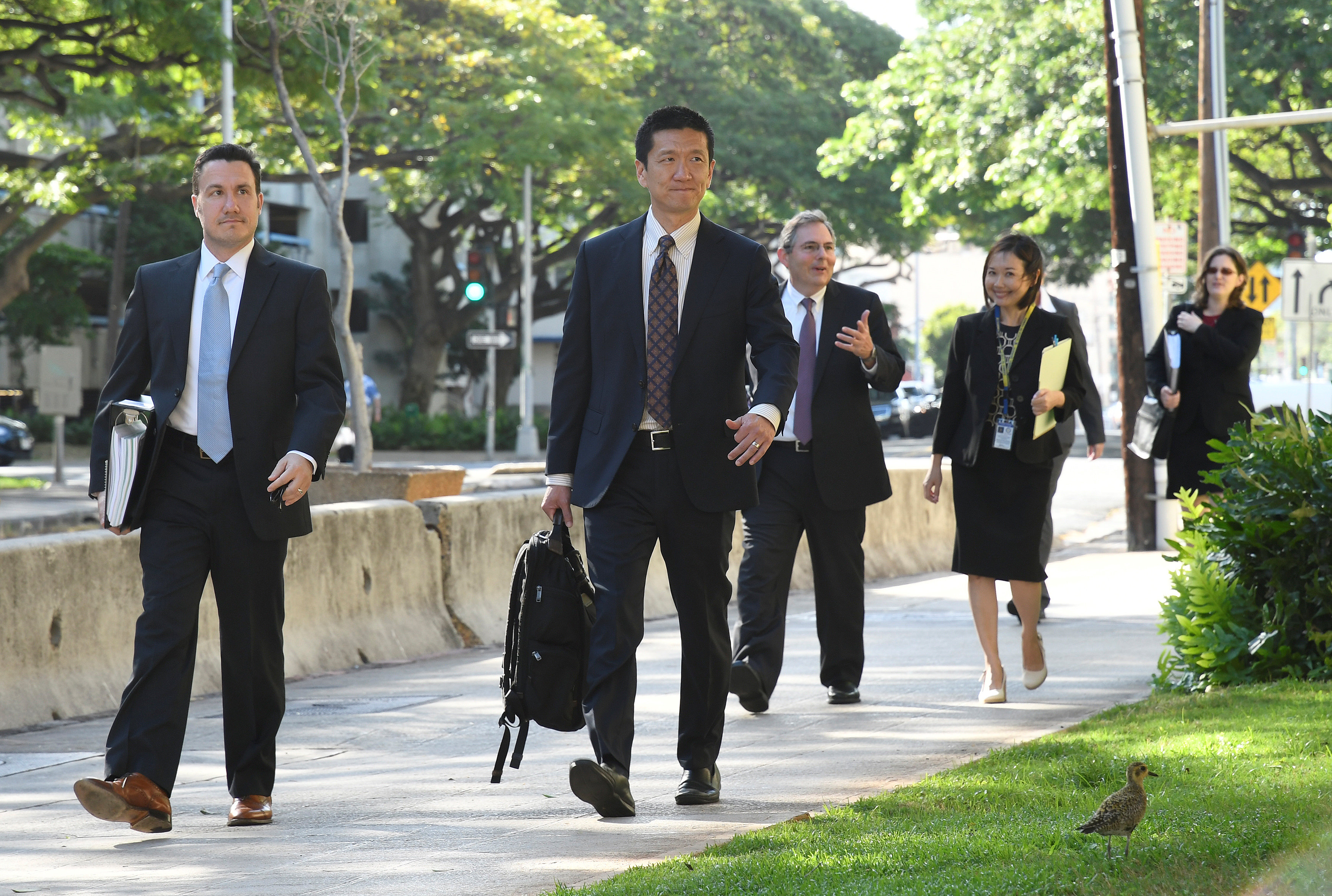 Trump signed the new ban on March 6 in a bid to overcome legal problems with a January executive order that caused chaos at airports and sparked mass protests before a Washington judge stopped its enforcement in February. Trump has said the travel ban is needed for national security.

In its challenge to the travel ban, Hawaii claims its state universities would be harmed by the order because they would have trouble recruiting students and faculty.

It also says the island state’s economy would be hit by a decline in tourism. The court papers cite reports that travel to the United States “took a nosedive” after Trump’s actions.

The state was joined by a new plaintiff named Ismail Elshikh, an American citizen from Egypt who is an imam at the Muslim Association of Hawaii and whose mother-in-law lives in Syria, according to the lawsuit.

Hawaii and other opponents of the ban claim that the motivation behind it is based on religion and Trump’s election campaign promise of “a total and complete shutdown of Muslims entering the United States.”

“The court will not crawl into a corner, pull the shutters closed, and pretend it has not seen what it has,” Watson wrote on Wednesday.

Watson wrote that his decision to grant the preliminary injunction was based on the likelihood that the state would succeed in proving that the travel ban violated the U.S. Constitution’s religious freedom protection.

Trump has vowed to take the case to the U.S. Supreme Court, which is currently split 4-4 between liberals and conservatives with the president’s pick – appeals court judge Neil Gorsuch – still awaiting confirmation.

(Reporting by Hunter Haskins in Honolulu; Additional reporting and writing by Brendan O’Brien in Milwaukee; Editing by Paul Tait) 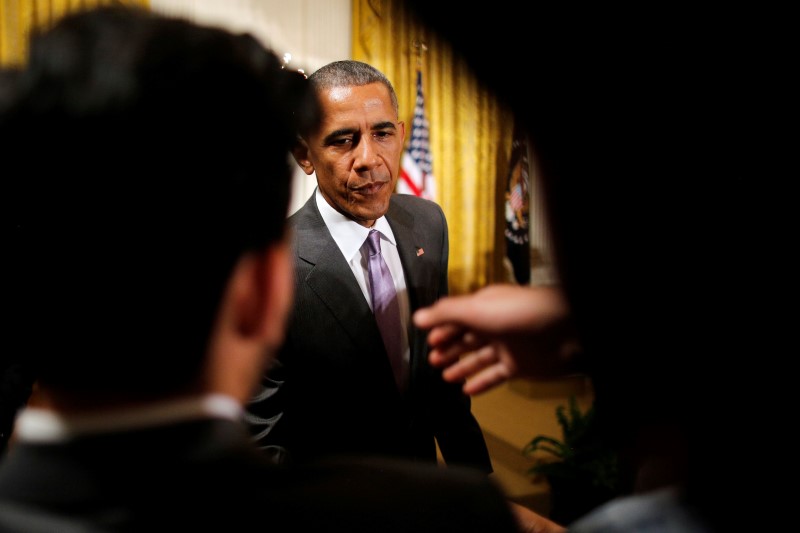 WASHINGTON (Reuters) – President Barack Obama on Thursday praised the contributions of Muslim immigrants to the United States, saying any effort to discriminate against the Islamic faith plays into the hands of terrorists.

“Muslim Americans are as patriotic, as integrated, as American as any other members of the American family,” Obama said at a White House reception to celebrate the Muslim Eid al-Fitr holiday.

“Whether your family has been here for generations or you’re a new arrival, you’re an essential part of the fabric of our country,” he said.

The Obama administration has faced criticism for its plan to admit as many as 10,000 Syrian refugees to the United States this year, with some Republicans warning that violent militants could enter the country posing as refugees.

Republican presidential candidate Donald Trump had proposed a temporary ban on Muslims entering the country after a Muslim American and his wife killed 14 people in San Bernardino, California, last year.

While not naming Trump specifically, Obama said that discriminatory policies against Muslims are an affront the “values that already make our nation great.”

Trump, who will be giving his official acceptance speech at the Republican National Convention on Thursday night, has used “make America great again” as his campaign slogan.

“Singling out Muslim Americans, moreover, feeds the lie of terrorists like ISIL, that the West is somehow at war with a religion that includes over a billion adherents,” Obama said, using an acronym for the Islamic State militant group. “That’s not smart national security.”

LONDON (Thomson Reuters Foundation) – Mass killings, forced evictions and conflicts over land put indigenous and minority groups at risk of being eradicated from their ancestral lands, a human rights group said on Tuesday.

From Ethiopia, China and Iraq, the combination of armed conflicts and land dispossession has led to the persecution of minority groups and the erosion of cultural heritage, according to a report by the Minority Rights Group (MRG).

Carl Soderbergh, MRG director of policy and communications, said while discrimination against ethnic or religious minorities is not new, the level of targeted abuse is getting worse.

“The conflict that’s happening in Syria and Iraq right now is leading to the massive displacement of smaller and very ancient religious minorities like the Yazidis and the Sabean Mandeans,” said Soderbergh, lead author of the ‘State of the World’s Minorities and Indigenous Peoples 2016’ report.

“They are essentially at risk of being totally eradicated in their traditional areas of origin.”

Civil conflicts and sectarian tensions have engulfed Iraq since 2003 when a U.S.-led coalition toppled Saddam Hussein. In 2014, Islamic State militants declared a caliphate after capturing swathes of Iraq and Syria.

Minorities including the Yazidi, Turkmen, Shabak, Christians and Kaka’i have been disproportionately affected by the recent violence in Iraq.

According to U.N. officials, Islamic State, also referred to as ISIS, has shown particular cruelty to the Yazidis, whom they regard as devil-worshippers, killing, capturing and enslaving thousands.

The persecution of Yazidis was recognized as genocide by the United Nations in June.

“It is getting worse. Whether it’s armed groups like ISIS or (Nigerian Islamist group) Boko Haram or it’s governments, there’s this targeting of heritage that we’re seeing, which is extremely worrisome,” Soderbergh said.

He said many minorities and indigenous peoples also face forced resettlement or evictions from their ancestral lands to make way for large-scale infrastructure or agricultural businesses, which further threatens their cultural heritage and identity.

For example, in parts of East Africa, governments are pushing for pastoralist communities to switch to settled farming with supporters saying such a move will create better food security, curb conflict between herders and farmers and free up land.

But Maasai herdsmen say the privatization and subdivision of their ancestral lands threatens ancient pastoralist practices, endangering livestock on which they depend and eroding communal rights to land and natural resources.

“Once a community is removed from the land, they really struggle to  maintain their cultures and convey their cultures to the next generation,” Soderbergh said.

By 2115, it is estimated that at least half of the approximately 7,000 indigenous languages worldwide will die out, the report said.

Although some governments see these groups as a threat to the state, Soderbergh said minorities and indigenous peoples must be included in decisions that affect their communities.

The Supreme Court has ruled that a woman who was denied a job with the clothing company Abercrombie & Fitch because of her headscarf was discriminated against on the basis of her religion.

The ruling was 8-1 in favor of the woman.

“Thus, the rule for disparate-treatment claims based on a failure to accommodate a religious practice is straightforward: An employer may not make an applicant’s religious practice, confirmed or otherwise, a factor in employment decisions,” Justice Antonin Scalia wrote for the 8-1 majority.

The court said that Title VII of the Civil Rights Act requires employers to not consider religious accommodations in hiring processes.

“For example, suppose that an employer thinks (though he does not know for certain) that a job applicant may be an orthodox Jew who will observe the Sabbath, and thus be unable to work on Saturdays. If the applicant actually requires an accommodation of that religious practice, and the employer’s desire to avoid the prospective accommodation is a motivating factor in his decision, the employer violates Title VII,” Justice Scalia wrote.

The Equal Employment Opportunity Commission filed suit on behalf of the woman.

Abercrombie claimed they had not violated the law because she had not been denied employment for the head scarf.  They said she did not mention during her interview she was wearing the scarf for religious reasons and so it’s not on the company to know that’s why she was wearing it.  Scarves are a violation of the company’s employee dress code.

In his dissent, Justice Clarence Thomas said that the company could not be guilty of discrimination because the company’s policy applied to all employees and not just Muslims.

A pro-life student group at Johns Hopkins University has been denied official status after a debate that included pro-life students being compared to white supremacists.

Kristian Hawkins, president of Students for Life of America, said the student council claimed being pro-life violates the school’s harassment policy. The violated group, Voice for Life, is searching for an attorney to sue the school because of the ban. END_OF_DOCUMENT_TOKEN_TO_BE_REPLACED

The European Court of Human Rights has vindicated an employee of British Airways who claimed she was discriminated against at work. The ECHR said BA had not struck a fair balance between Nadia Ewedia’s religious rights and the company’s desire to show a “corporate image.” END_OF_DOCUMENT_TOKEN_TO_BE_REPLACED