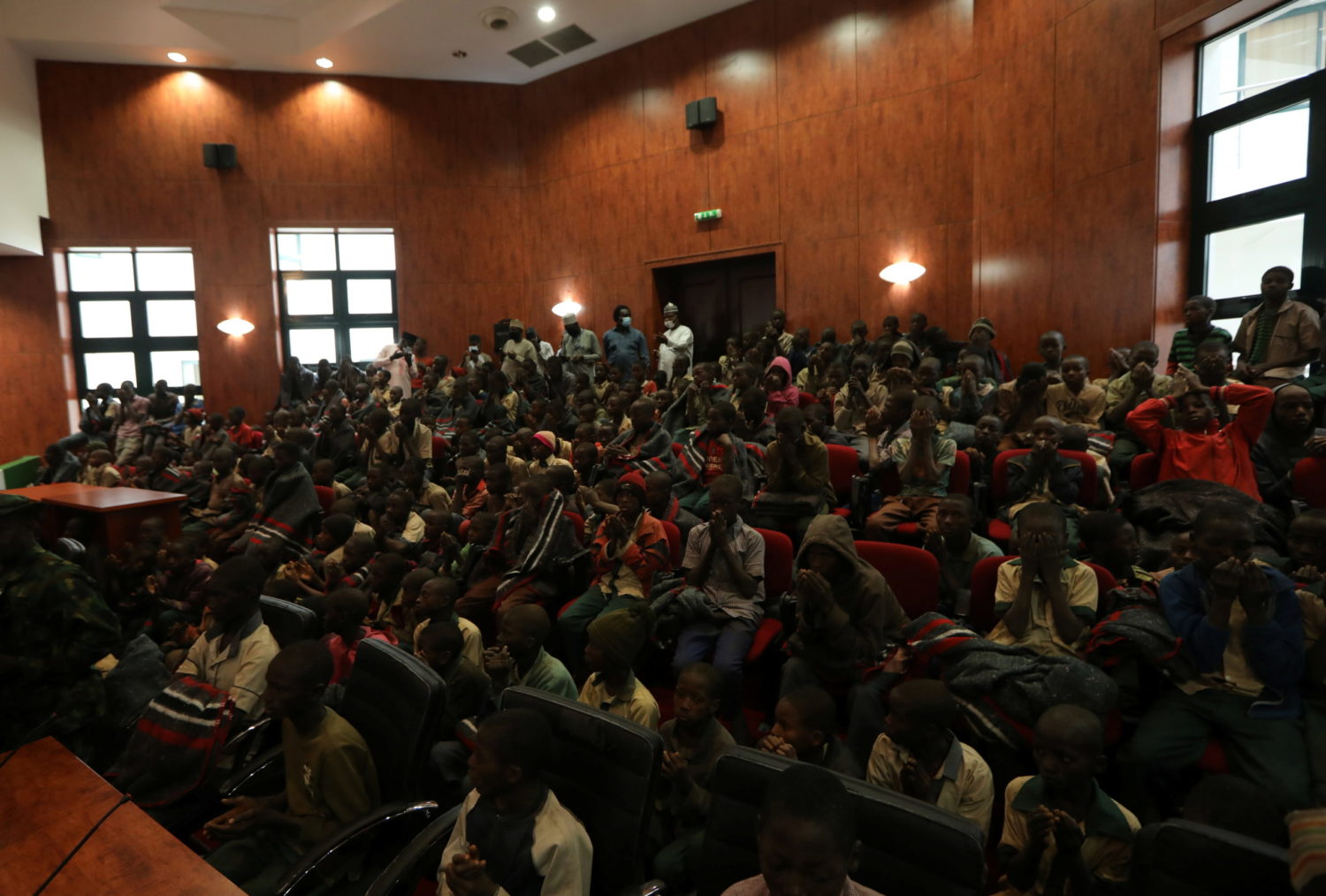 KATSINA, Nigeria (Reuters) – Scores of schoolboys who were rescued from kidnappers in northwest Nigeria arrived back home on Friday, many of them barefoot and wrapped in blankets after their week-long ordeal.

The boys, dressed in dusty clothes, looked dazed and weary but otherwise well as they got off buses in the city of Katsina and walked to a government building.

One, who did not give his name, said the captors had told him to describe them as members of the Islamist militant group Boko Haram, although he suspected they were armed bandits.

“They beat us morning, every night. We suffered a lot. They only gave us food once a day and water twice a day,” he told Nigeria’s Arise television.

A week earlier, gunmen on motorbikes raided the boys’ boarding school in the town of Kankara in Katsina state and marched hundreds of them into a vast forest that spans four states.

Security services rescued them on Thursday, authorities said. However, many details surrounding the incident remain unclear, including who was responsible, whether a ransom was paid, how the boys’ release was secured and whether all of them are now safe.

The abduction gripped a country already incensed by widespread insecurity, and evoked memories of Boko Haram’s 2014 kidnapping of more than 270 schoolgirls in the northeastern town of Chibok.

Six years on, only about half the girls have been found or freed. Some were married off to fighters, while others are assumed to be dead.

Any Boko Haram involvement in this kidnapping would mark a geographical expansion in its activities from its base in the northeast. The region is also plagued by armed gangs that rob and kidnap for ransom.

Hours before the rescue of the boys was announced on Thursday, a video started circulating online purportedly showing Boko Haram militants with some of the boys. Reuters was unable to verify the authenticity of the footage or who released it.

The boy interviewed by Arise TV was one of those who spoke in the video.

“They said I should say they are Boko Haram and gangs of Abu Shekau,” he said, referring to a name used by a Boko Haram leader. “Sincerely speaking, they are not Boko Haram … They are just small and tiny, tiny boys with big guns.”

Another of the boys told Reuters that the kidnappers had initially taken them to a hiding place.

“But when they saw a jet fighter, they changed the location and hid us in a different place. They gave us food, but it was very little,” he said.

TEARS OF JOY, PRAYERS OF THANKS

On Friday, the boys from the Government Science Secondary School walked from the buses in single file, flanked by soldiers and armed police officers, and were taken to the government building to meet the governor.

The boys were later brought back to the buses and driven off for medical checks, officials said.

A group of parents waited to be reunited with them in a shaded parking lot in another part of town.

Hajiya Bilikisu, in a cream-colored veil, said she had started to lose hope that she would ever see her son, Abdullahi Abdulrazak, again.

“I was just crying, crying with joy, when I saw them, my son” in pictures after the release, she told Reuters.

“They have to recovery psychologically,” she said. “They went through trauma. We have to try to counsel them, so they can now become normal persons.”

Hafsat Funtua, mother of 16-year-old Hamza Naziru, said she ran out of her house with joy “not knowing where to go” when she heard the news.

“I couldn’t believe what I heard until neighbors came to inform me that it’s true,” she said in a phone interview. She later returned home to pray.

The mass kidnapping piled pressure on the government to deal with militants in the north of the country.

It was particularly embarrassing for President Muhammadu Buhari, who comes from Katsina state and has repeatedly said that Boko Haram has been “technically defeated”.

Buhari said he had congratulated the state’s governor and the army, in a brief clip from an interview posted on his Twitter account earlier on Friday.

“Our children should not have to go to school in trepidation. The federal government is doing everything possible to secure all our schools, and indeed all Nigerians,” he said at a press conference in the capital, Abuja. 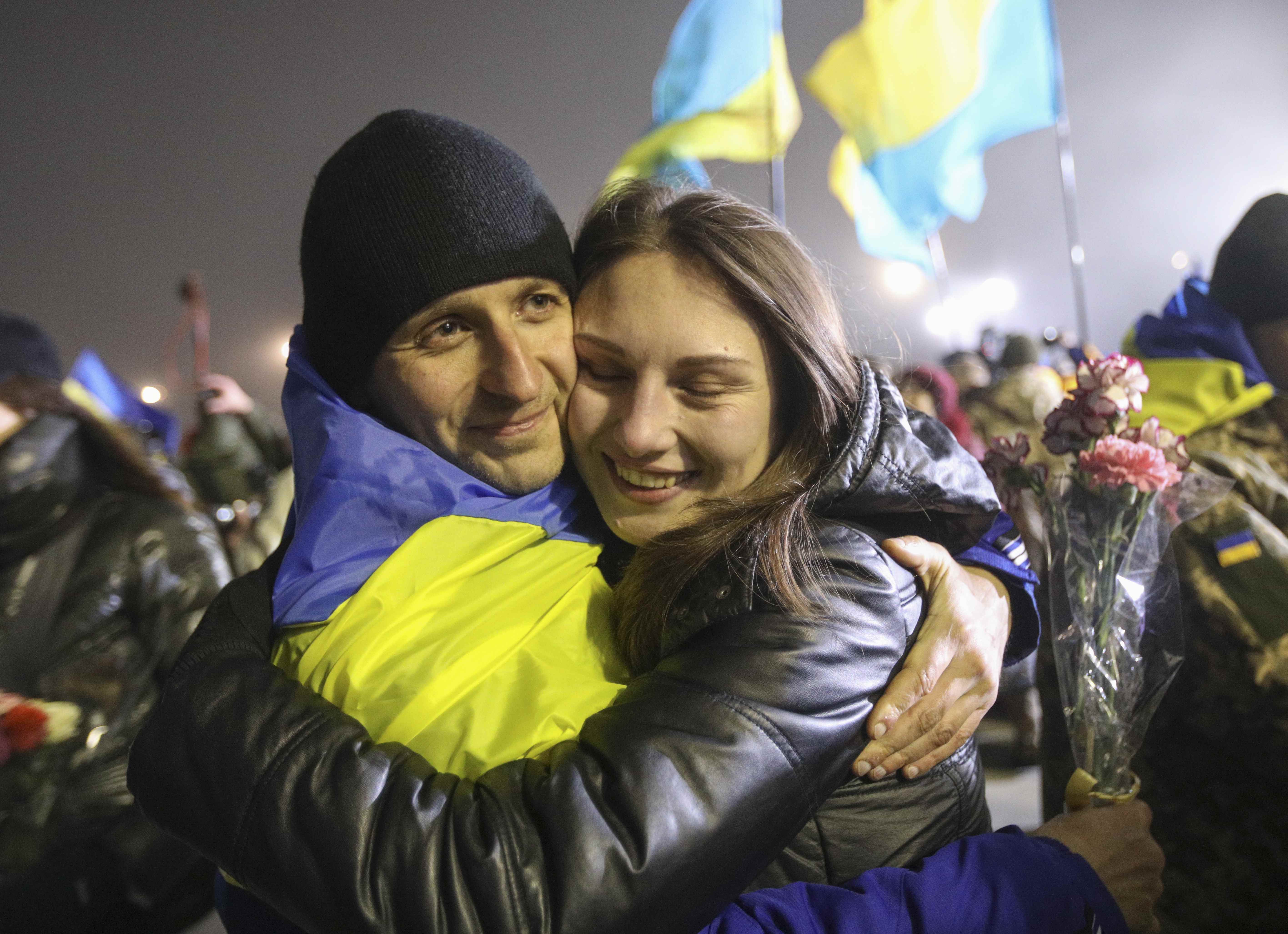 HORLIVKA, Ukraine (Reuters) – Ukraine and pro-Russian separatist rebels conducted the largest exchange of prisoners since conflict broke out in 2014, sending hundreds of captives home to their families on Wednesday ahead of New Year and Orthodox Christmas.

More than 10,000 people have been killed in the conflict and casualties are still reported almost daily despite a ceasefire that froze the frontlines in place since 2015.

“My son rang,” the mother of a Ukrainian prisoner Oleksandr Oliynyk told the Ukrainian news channel 112.

According to the terms of the deal, Kiev was meant to hand over 306 prisoners to the rebels and receive 74 prisoners in return. A Reuters photographer at the scene saw the Ukrainian prisoners being loaded onto buses in the town of Horlivka and taken to territory controlled by the Ukrainian government.

“All 74 Ukrainian hostages are already at home, on the territory controlled by our army,” Ukrainian President Petro Poroshenko wrote on social media.

According to Poroshenko, among the prisoners handed to Ukraine were a historian and a “cyborg” – the nickname Ukrainians gave to soldiers who defended Donetsk airport in one of the conflict’s most intense battles in 2014. 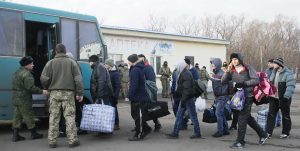 Prisoners of war (POWs) from the separatist self-proclaimed Luhansk People’s Republic (LNR) board a bus during the exchange of captives near the city of Bakhmut in Donetsk region, Ukraine December 27, 2017. REUTERS/Valentyn Ogirenko

The exact number of prisoners exchanged is uncertain. Viktor Medvedchuk, Ukraine’s representative to ongoing peace talks, said some captives held by Ukraine refused to return to rebel-held areas, according to the Russian news agency TASS.

There was no immediate comment from the authorities in Moscow, which Ukraine and its Western allies accuse of supporting the pro-Russian separatists with troops, cash and heavy weapons, an accusation Moscow denies.

German Chancellor Angela Merkel and French President Emmanuel Macron welcomes the exchange in a joint statement and called on both sides to release the remaining captives.

Germany’s foreign ministry said it was a significant step in implementing the ceasefire agreement agreed in the Belarus capital Minsk.

“Above all, it is also an important humanitarian gesture before the New Year and Orthodox Christmas,” a foreign ministry statement said.

The Minsk agreements, intended to end the fighting in Ukraine, were signed by Ukraine, Russia, Germany and France in the Belarussian capital in early 2015. 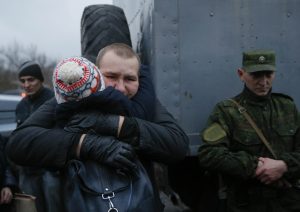 A prisoner (back) of war (POW) from the Ukrainian armed forces is embraced during the exchange of captives in Horlivka in Donetsk region, Ukraine December 27, 2017. REUTERS/Valentyn Ogirenko

The exchange came as U.S. Secretary of State Rex Tillerson asked Russia to “lower the level of violence” in eastern Ukraine.

On Cyber Monday, November 27th, millions of shoppers will be looking online for amazing gifts for friends and family.  We could not think of a better time to launch ptlshop.com!  On Cyber Monday beginning at 10 am Central Time, we will be broadcasting live on our new website, ptlshop.com, with online and on street specials here at Morningside!  There will be unbelievable deals and brand new, never before seen products that you will love!

This Thanksgiving, after spending time celebrating and thanking God for our incredible blessings and our bellies are full, we will be busy filling the PTL shop website with incredible gifts to help you get your Christmas shopping list DONE the moment we launch!  There will be apparel and jewelry, Christian books and media, wonderful products for health and beauty, beautiful and useful products for your home and garden, and some brand new gizmos and gadgets you just have to see!

If you have ever experienced an online shopping event here at Morningside, you understand that nobody knows what will happen next and this year promises to be the biggest event EVER!  So mark your calendars for Cyber Monday, November 27th at 10 am to go to ptlshop.com and simply push the “Watch live” button to take you on a truly fun and bargain filled day of shopping!

Remember to keep coming back for daily deals and incredible additions to the PTL Shop website and live events!

All of us here at Morningside and The Jim Bakker Show as well as the amazing team behind ptlshop.com wish you and your family a beautiful Thanksgiving filled with love!  We hope to see you soon, Monday, November 27th on ptlshop.com!

GENEVA (Reuters) – Nearly half a million Syrians have returned to their homes so far this year, including 440,000 internally displaced people and more than 31,000 returning from neighboring countries, the U.N. refugee agency said on Friday.

Most returned to Aleppo, Hama, Homs and Damascus, it said, on the view that security had improved in parts of the country.

“Most of these people are returning to check on properties, to find out about family members … They have their own perceptions about the security situation, real or perceived improvements in areas they are returning to.”

He said it was premature to say whether de-escalation zones set up via talks held by Russia, Iran and Turkey in Astana or U.N.-led peace talks in Geneva had accelerated the return trend.

A further 5 million are refugees in neighboring countries.

A survey conducted by the UNHCR in recent weeks showed that more than 80 percent of Syrian refugees expressed their wish to return home, he said.

“Of those, only about 6 percent were considering that to be a possibility in the near future,” he said

UNHCR believes that conditions for refugees to return in safety and dignity “are not yet in place in Syria”, he added.

A partnership between Free Chapel church and the LA Dream Center is opening a transitional home for youths between 18 and 23 who are coming from the foster care system.

The residence, called Freedom House, will also help young adults who are dealing with the probation system.

“More than a transitional home, we are believing Freedom House will be a place where students come to know the love of Jesus Christ, that He is our only hope and our Savior,” Pastor Jentezen Franklin of Free Chapel told The Christian Post. “…We are just so privileged to be a part of the dream … we can provide resources but we can’t do the other things that they do so well, the programs the facility.”

Pastor Matthew Barnett of the Dream Center told the Christian Post “the hope of America is in dynamic partnership of churches working together.”

Statistics show that up to 50 percent of foster kids end up homeless or in jail after they reach 18 and are forced out of the foster care system.  Barnett says they hope the Freedom House will help individuals make “positive lifestyle choices” that promote physical and mental well-being.