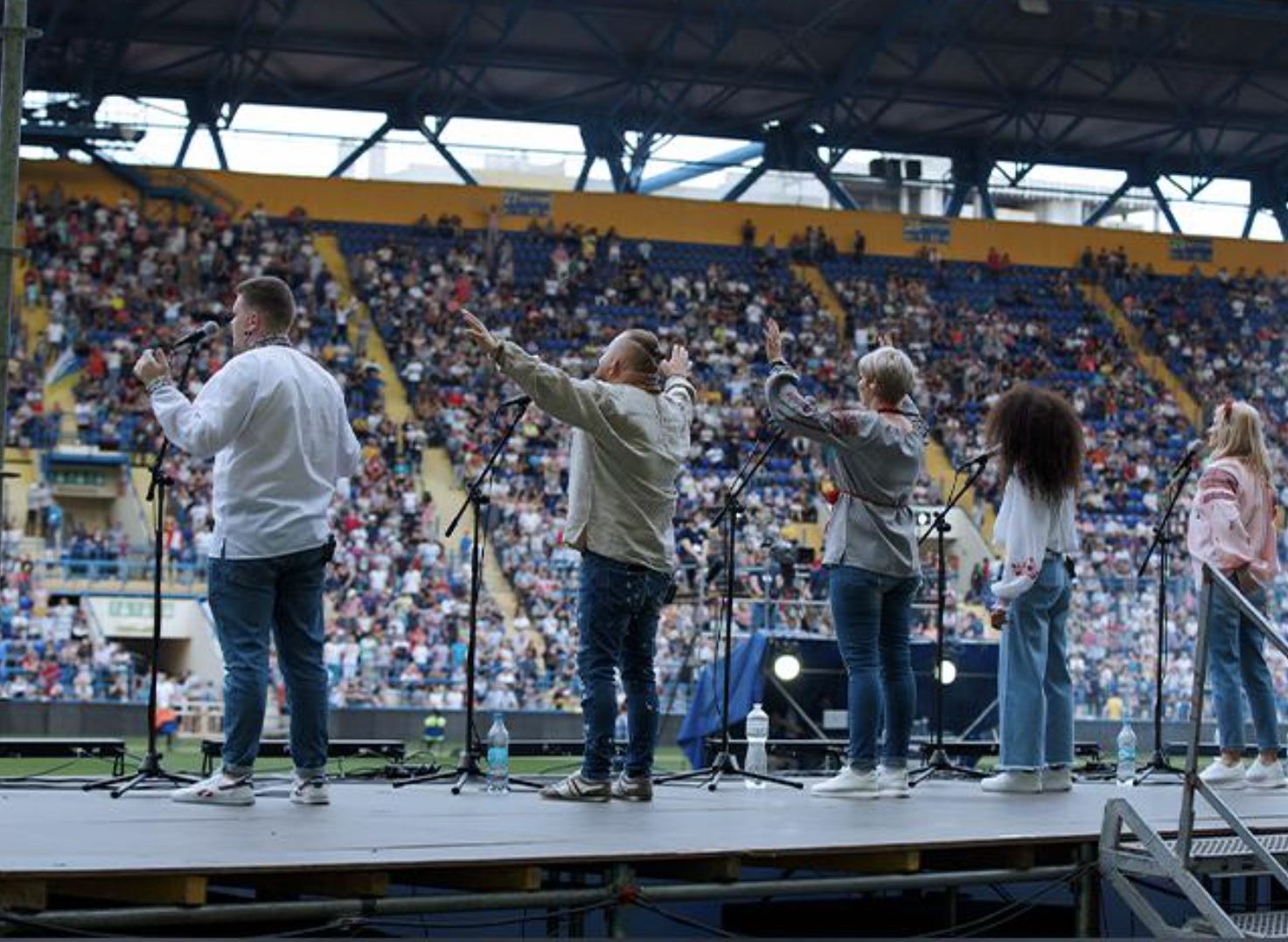 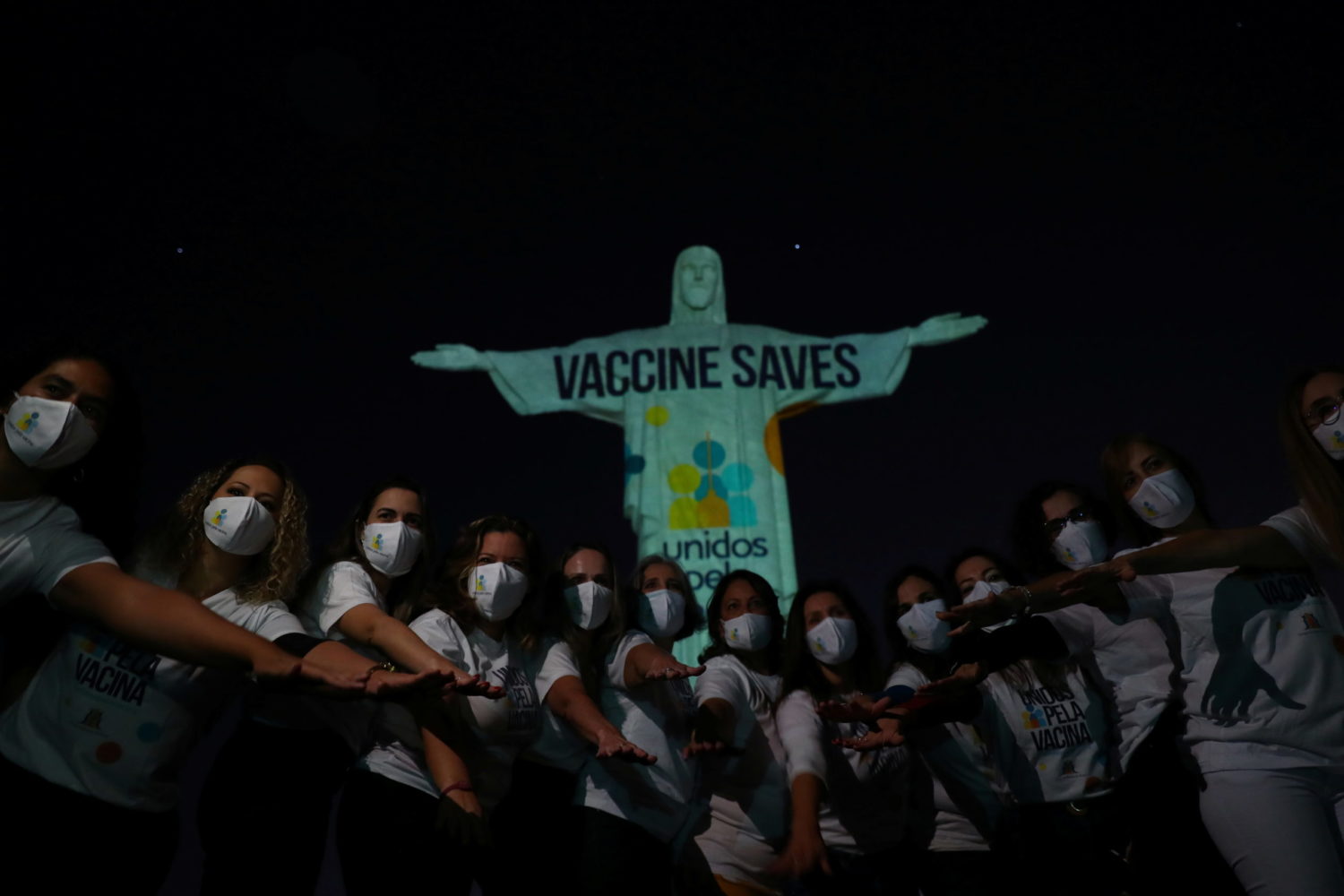 (Reuters) – The world’s most famous statue of Jesus Christ was lit up in Rio de Janeiro to promote vaccine equality as Brazil and developing countries struggle to protect residents from COVID-19.

The message “Vaccine saves, United for vaccines” was projected on Saturday onto the 98-foot (30-meter) statue by Unidos Pela Vacina (United by the Vaccine), in partnership with the Cristo Redentor Sanctuary and the Ogilvy Brazil advertising agency.

In January, two healthcare workers received the first shots of coronavirus vaccines at the foot of the statue as Brazil kicked off its vaccination campaign.

Since then, 17% of residents have received at least one dose of vaccine and 8% have been fully vaccinated.

The country ranks 30th in the world based on first doses given and far behind the 59% in Israel and 47% in the United States, according to a Reuters analysis.

New cases of COVID-19 are once again rising in Brazil and infections are at 82% of the peak the country hit in March, according to a Reuters analysis.

In May 2020, the statue was lit up to call for wearing masks to slow the progress of the pandemic. Brazil has reported the third-highest number of cases in the world and the second-highest number of deaths, with over 435,000 lives lost. 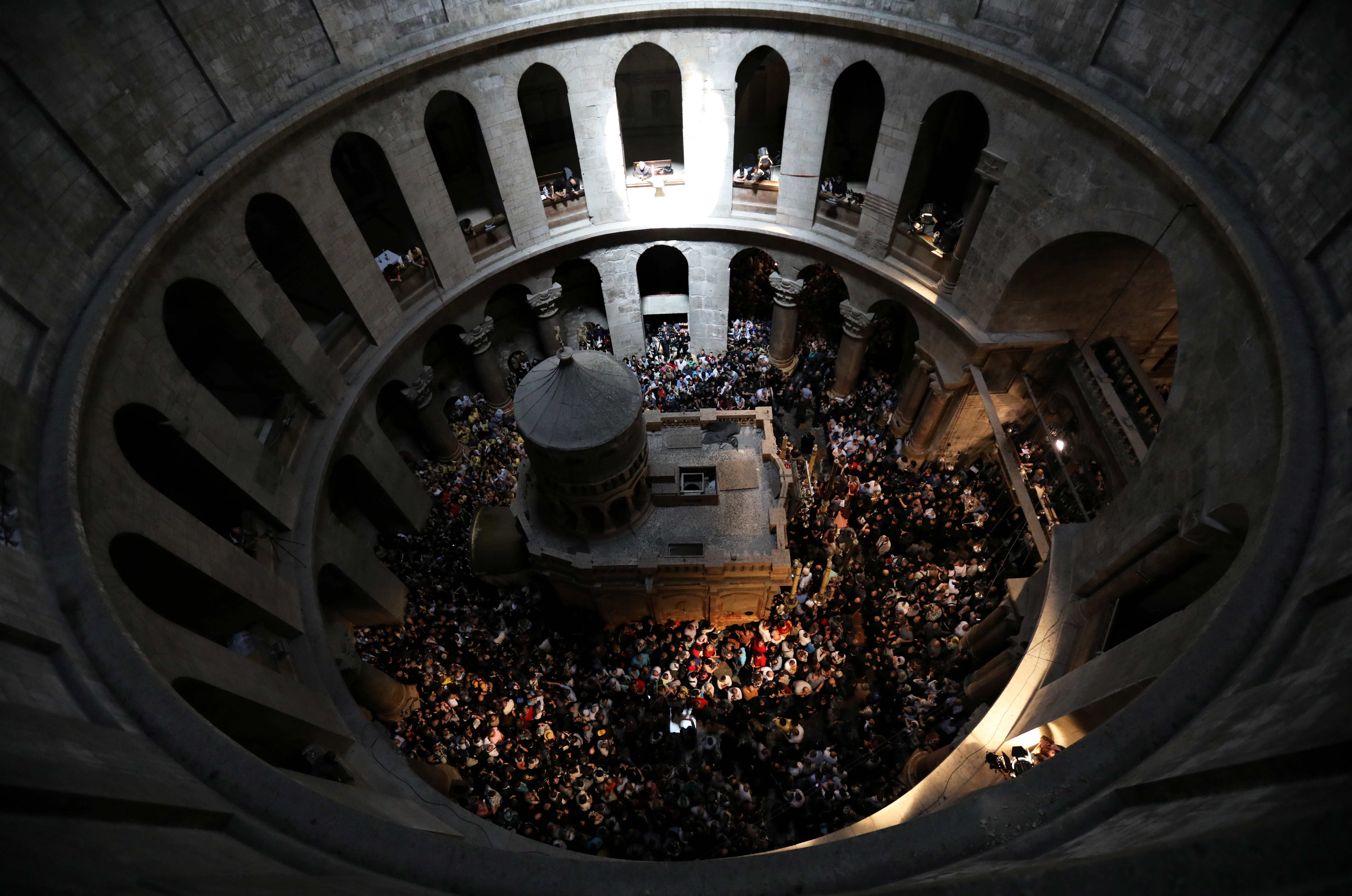 JERUSALEM (Reuters) – It is three o’clock in the morning and Artak Tadevosyan is wafting incense through the corridors of Jerusalem’s Church of the Holy Sepulchre, the site where Christians believe Jesus Christ was crucified and buried.

“Walking in the Lord’s footsteps, really, you have feelings that cannot be explained,” said the 26-year-old Armenian Orthodox cleric. “We don’t see it as stone, all these are holy places for us.” 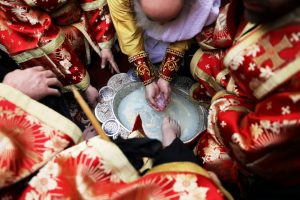 His Beatitude Theophilos III, the Patriarch of Jerusalem, performs the “Washing of the Feet” ceremony outside the Church of the Holy Sepulchre in Jerusalem’s Old City, April 5, 2018. REUTERS/Ammar Awad/File Photo

The Holy Sepulchre lies in Jerusalem’s Old City. A church was first built there in the 4th century under Constantine the Great, the Roman emperor who converted to Christianity.

Today, the Greek Orthodox, Armenian Orthodox and Roman Catholic churches share custody of the building, and tensions sometimes run high over who controls what.

Other denominations also hold services there, in languages including Latin, Arabic, Aramaic, Amharic and Ge’ez.

At night the building falls silent. Muslim families have long held the door key, because of the tensions between the Christian clergy.

In the Greek Orthodox Patriarchate nearby, His Beatitude Theophilos III, the Patriarch of Jerusalem, said he feels deep reverence for the church. 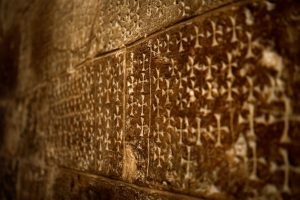 Crosses carved in the wall by pilgrims are seen beside stairs leading to the Crypt of St. Helena in the Church of the Holy Sepulchre in Jerusalem’s Old City, March 27, 2018. REUTERS/Corinna Kern

“For the Christian world the Holy Sepulchre is the heart of Jerusalem and the world,” he said during preparations for the Orthodox Christmas on Sunday.

“Why? Because this particular place, which is the rock of the crucifixion and the rock of the tomb, or the burial site, of Jesus Christ, has been watered, and therefore blessed, by the blood of The Righteous One.”

Pastor Jim and Lori, with special guest Pastor Ramiro Peña, discuss the importance of standing up for Christ in America today. END_OF_DOCUMENT_TOKEN_TO_BE_REPLACED

Pastor Jim and Lori, with special guest Pastor Ramiro Peña, discuss the importance of standing up for Christ in America today. END_OF_DOCUMENT_TOKEN_TO_BE_REPLACED

The purported baptism site of Jesus Christ has been named a World Heritage Site.

The United Nations Educational, Scientific and Cultural Organization (UNESCO) originally announced the decision last summer, saying it would add the Bethany Beyond the Jordan site on the east bank of the Jordan River — also known as Al-Maghtas — to its list of significant locations. The Vatican’s Fides News Agency reported it became official earlier this week.

Matthew 3 tells the story of John the Baptist baptizing Jesus in the Jordan River, which forms part of the modern-day boundary between Israel and Jordan. However, there had been some dispute over whether the baptism actually occurred on the river’s west bank or east bank.

UNESCO says Bethany Beyond the Jordan is “believed to be” the place of Jesus’ baptism, and also includes churches, chapels and a monastery dating to the Roman and Byzantine empires.

In an advisory report to UNESCO, the International Council on Monuments and Sites wrote “historical structures associated with the baptism of Jesus” sit on the west bank, but most churches stage pilgrimages to Bethany Beyond the Jordan “as the likely baptism site as a result of the wilderness character, described as the setting of the baptism, which seems lacking on the opposite banks.”

The council wrote “the large majority of Christians” consider Bethany Beyond the Jordan as the baptism site, and while it couldn’t verify that the location was the actual place where Jesus was baptized, the site still held “immense religious importance” to believers.

UNESCO has named 1,031 World Heritage Sites, either for cultural or natural significance. Other locations include the Taj Mahal, Machu Picchu and the Grand Canyon National Park. 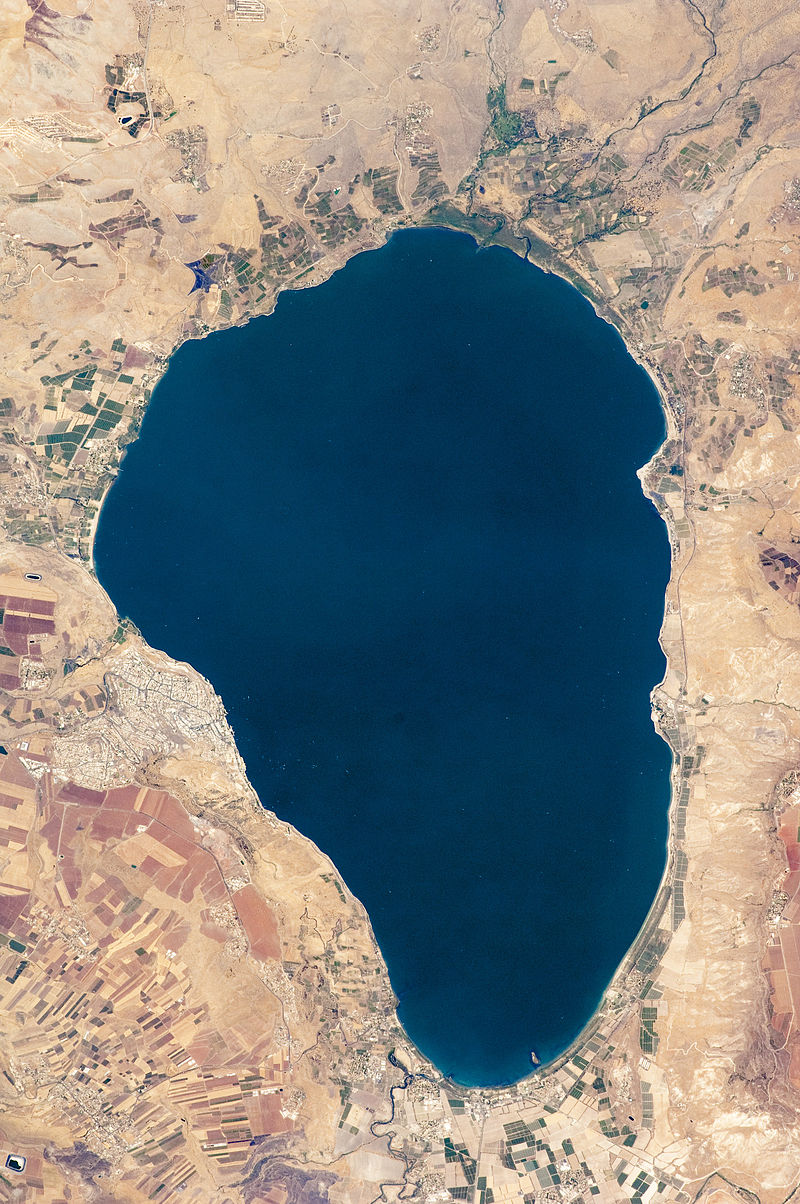 Archeologists in Israel unearthed ancient Hebrew inscriptions on a 1,500-year-old slab of marble while excavating near the Sea of Galilee, according to multiple published reports.

Haaretz, a news organization that covers Israel and the Middle East, reported that the discovery is the first evidence that a Jewish community once lived at Kursi, on the sea’s Eastern shore.

Kursi holds some biblical significance. It’s believed to be where Jesus performed the Miracle of the Swine (Mark 5:1-20), in which He healed a man who was possessed by demons by forcing the demons into a herd of 2,000 pigs that ran down an embankment and drowned in the sea.

Archaeologists told Haaretz they found the slab, which measured about 60 inches by 27 inches, in what they believe was a synagogue. They believe the tablet commemorates something — what, exactly, isn’t clear — but the eight-line message begins with the phrase “remembered for good.”

Arutz Sheva, another Israeli news site, reported that the inscription is Aramaic, but written with Hebrew letters. Those behind the discovery were working to translate it, but had already read “Amen” and “Marmariya” — which, depending on who you ask, either refers to marble or Mary.