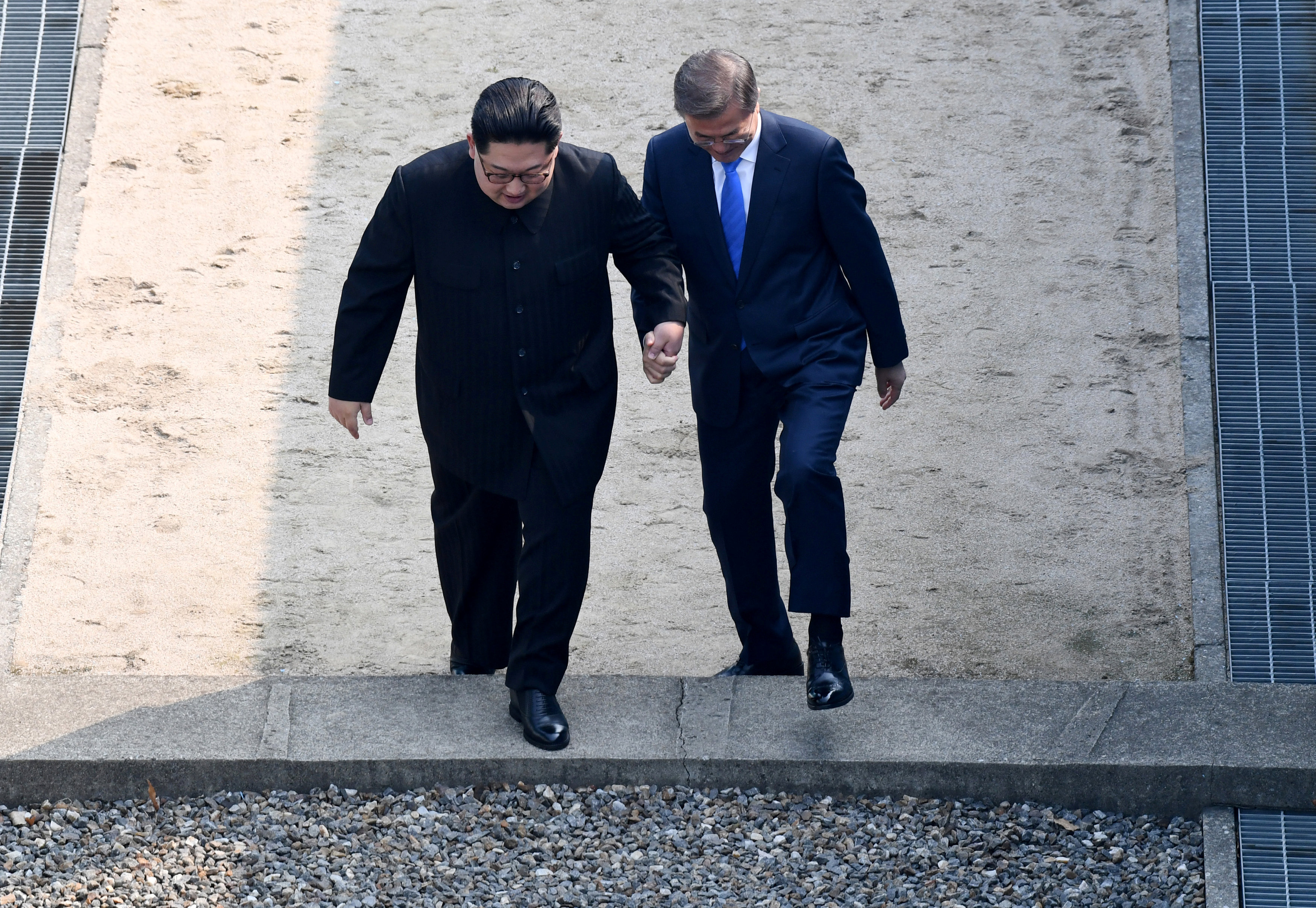 By Christine Kim and Josh Smith

SEOUL (Reuters) – The leaders of North and South Korea embraced on Friday after pledging to work for the “complete denuclearization of the Korean peninsula”, on a day of smiles and handshakes at the first inter-Korean summit in more than a decade.

The two Koreas announced they would work with the United States and China this year to declare an official end to the 1950s Korean War and seek an agreement on “permanent” and “solid” peace.

The declaration included promises to pursue phased arms reduction, cease hostile acts, transform their fortified border into a peace zone and seek multilateral talks with other countries including the United States.

“The two leaders declare before our people of 80 million and the entire world there will be no more war on the Korean peninsula and a new age of peace has begun,” the two sides.

Earlier, North Korea’s Kim Jong Un became the first North Korean leader since the 1950-53 Korean War to set foot in South Korea after shaking hands with his counterpart over a concrete curb marking the border in the heavily fortified demilitarized zone.

Scenes of Moon and Kim joking and walking together marked a striking contrast to last year’s barrage of North Korean missile tests and its largest ever nuclear test that led to sweeping international sanctions and fears of war.

Their meeting comes weeks before Kim is due to meet U.S. President Donald Trump in what would be the first ever meeting between sitting leaders of the two countries.

“After a furious year of missile launches and Nuclear testing, a historic meeting between North and South Korea is now taking place. Good things are happening, but only time will tell!” he said on Twitter.

He later added: “KOREAN WAR TO END! The United States, and all of its GREAT people, should be very proud of what is now taking place in Korea!”

China, North Korea’s main ally, welcomed the leaders’ statement and said it was willing to keep playing a proactive role in promoting political solutions. China is wary of being sidelined by a thaw between the two Koreas and by the upcoming summit between Trump and Kim.

Russia said it was ready to facilitate cooperation between North and South Korea, including in the fields of railway transport and energy.

Global markets were lifted by hopes the summit would pave the way for the end of conflict on the Korean peninsula. Shares in Seoul briefly rose more than 1 percent to a one-month high and Japan’s Nikkei share average also gained.

As part of efforts to reduce tension, the two sides agreed to open a liaison office, stop propaganda broadcasts and leaflet drops along the border and allow Korean families divided by the border to meet.

Days before the summit, Kim said North Korea would suspend nuclear and long-range missile tests and dismantle its only known nuclear test site.

But there has been widespread scepticism about whether Kim is ready to abandon the nuclear arsenal his country has developed for decades, justifying it as a necessary deterrent against U.S. invasion.

“Everything will not be resolved in the blink of an eye,” said Kim Young-hee, a North Korean defector-turned-economist at the Korea Development Bank.

“Kim Jong Un has put the ball in the U.S. court. He declared denuclearization, and promised to halt nuclear tests,” she said. “That tells us he wants the United States to guarantee the safety of his regime … in return for denuclearization.”

It is not the first time leaders of North and South Korea have declared hopes for peace. Two earlier summits, in Pyongyang in 2000 and 2007, failed to halt the North’s weapons program or improve relations in a lasting way.

“We will make efforts to create good results by communicating closely, in order to make sure our agreement signed today before the entire world, will not end as just a beginning like previous agreements before today,” Kim said after the agreement was signed.

FIRST ACROSS THE LINE

Earlier, Moon greeted Kim at the military demarcation line where the men smiled and shook hands.

In an unplanned move, Kim invited Moon to step briefly across into North Korea, before the two leaders crossed back into South Korea holding hands.

“I was excited to meet at this historic place and it is really moving that you came all the way to the demarcation line to greet me in person,” Kim said, wearing his customary black Mao suit.

“A new history starts now. An age of peace, from the starting point of history,” Kim wrote in Korean in a guest book in the South’s Peace House before talks began.

During a private meeting in the morning, Kim told Moon he came to the summit to end the history of conflict and joked he was sorry for waking Moon up with his early morning missile tests, a senior presidential official said.

Moon and Kim released their joint declaration before a dinner banquet.

Later, with their wives, they watched a music performance and held hands as they watched a montage of photos from their summit set to a K-pop song that included the words “be a family again”.

After warm farewells, Kim was driven back to North Korea.

The United States said earlier it was hopeful talks on peace and prosperity would make progress and it looked forward to discussions with South Korea in preparation for the planned meeting of Trump and Kim in coming weeks.

Just months ago, Trump and Kim were trading threats and insults as the North made rapid advances in pursuit of nuclear-armed missiles capable of hitting the United States.

The United States stations 28,500 troops in South Korea as a legacy of the Korean War, which ended in a truce, not a peace treaty. The war pitted the South, U.N. and U.S. forces against the communist North, backed by China and Russia.

Kim and Trump are expected to meet in late May or June. Trump said on Thursday he was considering several dates and venues.

BEIJING (Reuters) – China’s air force has carried out exercises near the Korean peninsula, practicing to defend against a “surprise attack” coming over the sea, Chinese state media reported.

An anti-aircraft defense battalion carried out the exercises early on Tuesday, near the Bohai Sea, the innermost gulf of the Yellow Sea that separates China from the peninsula, an official military website www.81.cn reported.

Troops traveled to the site from central China before immediately beginning drills to fend off the “surprise attack” simulating real battle, it said.

“The troops rapid response capabilities and actual combat levels have effectively been tested,” it said.

It was the first time certain weapons, which it did not identify, had been used to shoot down low-altitude targets coming over the sea, www.81.cn said, without elaborating.

China’s Defence Ministry did not immediately respond to a faxed request for comment.

The exercise came days after North Korea carried out its sixth and largest nuclear test of an advanced hydrogen bomb and there is mounting concern internationally that the country plans more weapons tests, possibly of a long-range missile.

After weeks of rising tension, South Korea and the United States have been discussing the deployment of aircraft carriers and strategic bombers to the Korean peninsula.

China is deeply suspicious of any U.S. backed military build up in the region and has repeatedly expressed anger at the deployment of a U.S. anti-missile defense system in South Korea. 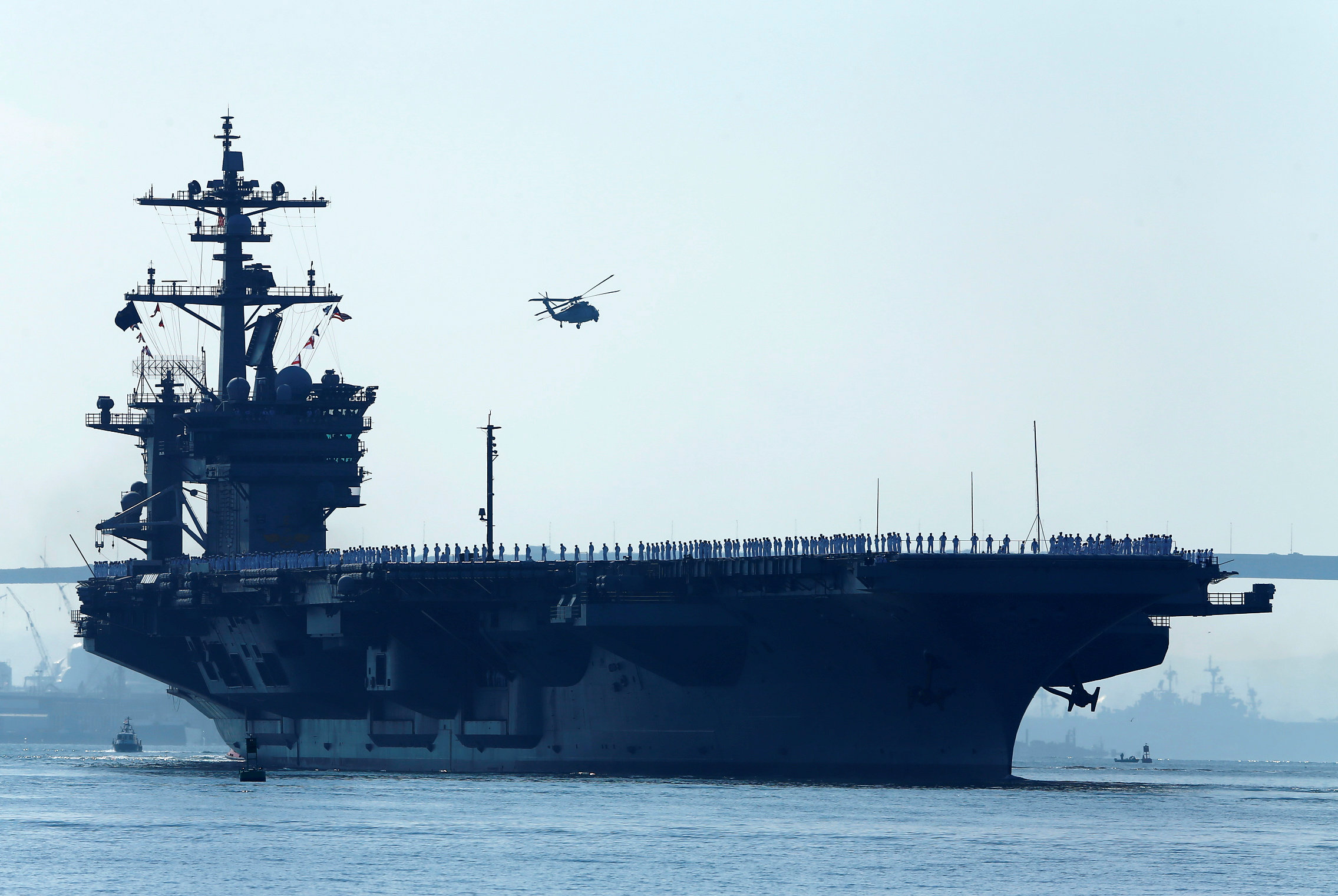 WASHINGTON (Reuters) – A U.S. Navy strike group will be moving toward the western Pacific Ocean near the Korean peninsula as a show of force, a U.S. official told Reuters on Saturday, as concerns grow about North Korea’s advancing weapons program.

Earlier this month North Korea tested a liquid-fueled Scud missile which only traveled a fraction of its range.

The strike group, called Carl Vinson, includes an aircraft carrier and will make its way from Singapore toward the Korean peninsula, according to the official, who was not authorized to speak to the media and requested anonymity.

The news was first reported by Reuters.

In a statement late Saturday, the U.S. Navy’s Third Fleet said the strike group had been directed to sail north, but it did not specify the destination. The military vessels will operate in the Western Pacific rather than making previously planned port visits to Australia, it added.

This year North Korean officials, including leader Kim Jong Un, have repeatedly indicated an intercontinental ballistic missile test or something similar could be coming, possibly as soon as April 15, the 105th birthday of North Korea’s founding president and celebrated annually as “the Day of the Sun.”

Trump’s national security aides have completed a review of U.S. options to try to curb North Korea’s nuclear and missile programs. These include economic and military measures but lean more toward sanctions and increased pressure on Beijing to rein in its reclusive neighbor.

Although the option of pre-emptive military strikes on North Korea is not off the table, the review prioritizes less-risky steps and de-emphasizes direct military action.

Trump spoke with South Korea’s acting President Hwang Kyo-ahn on Friday, the White House said on Saturday in a statement which did not mention the strike group.

As many as 18 labs around the country have been sent shipments of live anthrax when they should have received inactive or dead virus for research purposes.

And in Korea, officials say that 22 Air Force personnel may have been exposed to anthrax and are now undergoing treatment as a precaution.

Jason McDonald of the Centers for Disease Control said that most of the labs are private but a few are operated by government and public institutions.  The shipments were sent from the Army’s Dugway Proving Ground in Utah to California, Delaware, Maryland, New Jersey, New York, Tennessee, Texas, Virginia and Washington.

One of the samples arrived at Osan Air Base in Korea leading to the possible infections of military personnel.

“There is absolutely no excuse. Not for the shipping institution. Not for receiving institutions that failed to confirm inactivation upon receipt,” Richard Ebright, a biosafety expert at Rutgers in New Jersey said. “Both should lose, irrevocably, authorization for work with active or inactivated select agents.”

The incorrect shipment was discovered by a laboratory in Maryland.