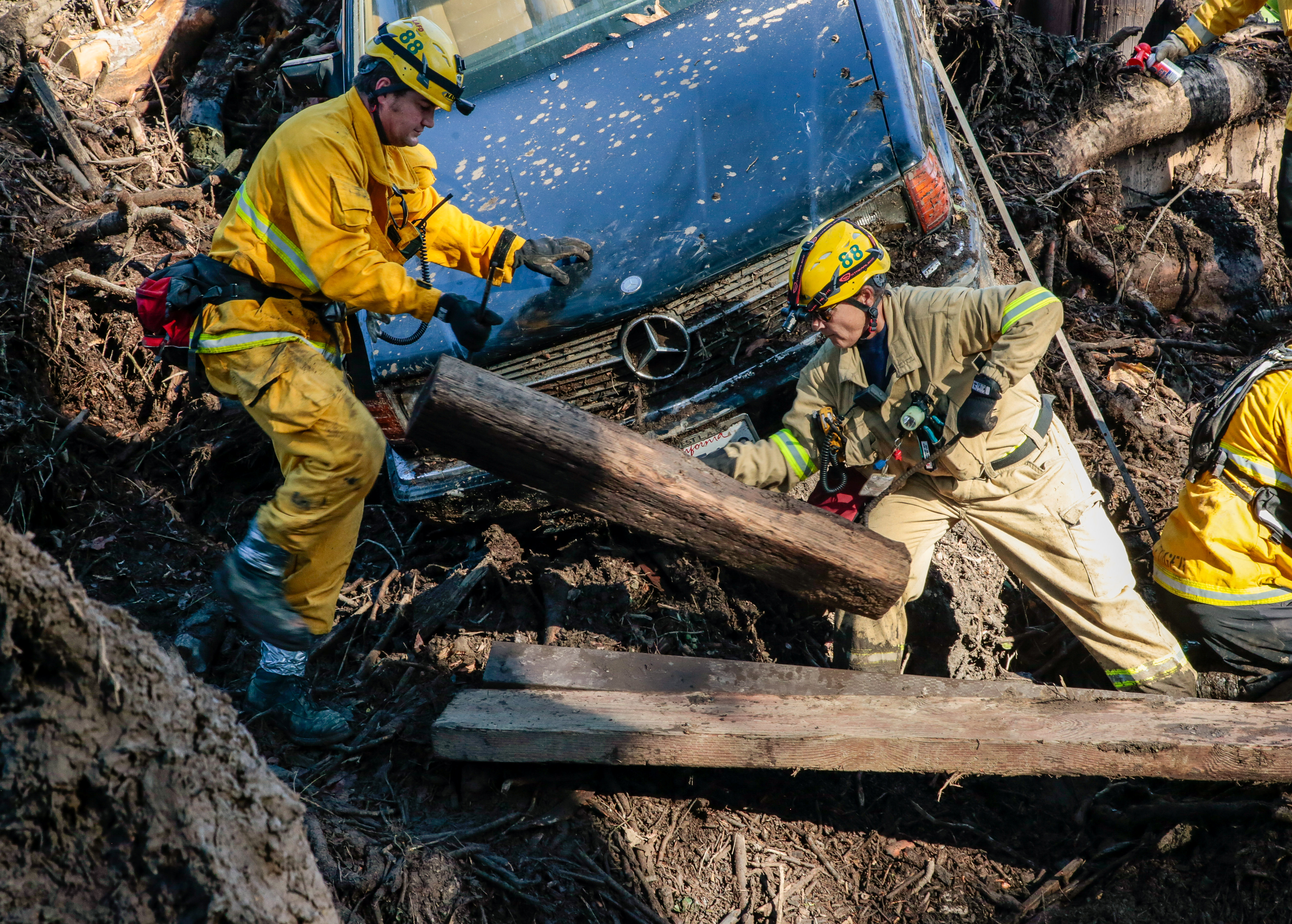 (Reuters) – The number of people missing from last week’s deadly Southern California mudslides fell to three on Monday as hundreds of rescue workers searched for survivors from the rain-driven slides that killed 20 people.

A 53-year-old transient, John Keating, had been listed among the four still missing but was found safely in Ventura, California, with his dog, the Santa County Sheriff’s Office said in a statement.

Emergency officials said hopes were diminishing that they would pull more survivors from the ravaged landscape of hardened muck, boulders and twisted debris left behind by the Tuesday mudslides that scoured a landscape already barren from last year’s record-setting wildfires.

The mudslides that scoured the affluent community of Montecito, 85 miles (137 km) northwest of Los Angeles, caused the greatest loss of life from a California mudslide in at least 13 years. 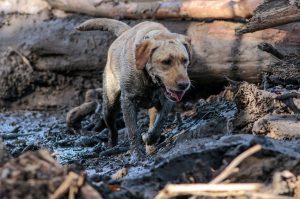 A search and rescue dog is guided through properties after a mudslide in Montecito, California, U.S. January 12, 2018. REUTERS/ Kyle Grillot

Ten people perished in January 2005 when a hillside saturated by weeks of torrential rains collapsed in the seaside hamlet of La Conchita, 18 miles (29 km) southeast of Montecito, burying more than a dozen homes in seconds.

The White House on Monday said that President Donald Trump had been briefed on the situation.

“The President and First Lady extend their deepest sympathies to the families affected, their appreciation for the first responders saving lives, and their prayers for those who remain missing,” the White House said in a statement.

Another 900 emergency personnel arrived this weekend to join the relief effort conducted by more than 2,100 personnel from local, state and federal agencies.

As a precaution against further slides, officials have ordered residents in most of the southeastern corner of Montecito to leave their homes for what was likely to be one or two weeks.

(Reporting by Scott Malone in Boston; Editing by Chizu Nomiyama and Lisa Shumaker) 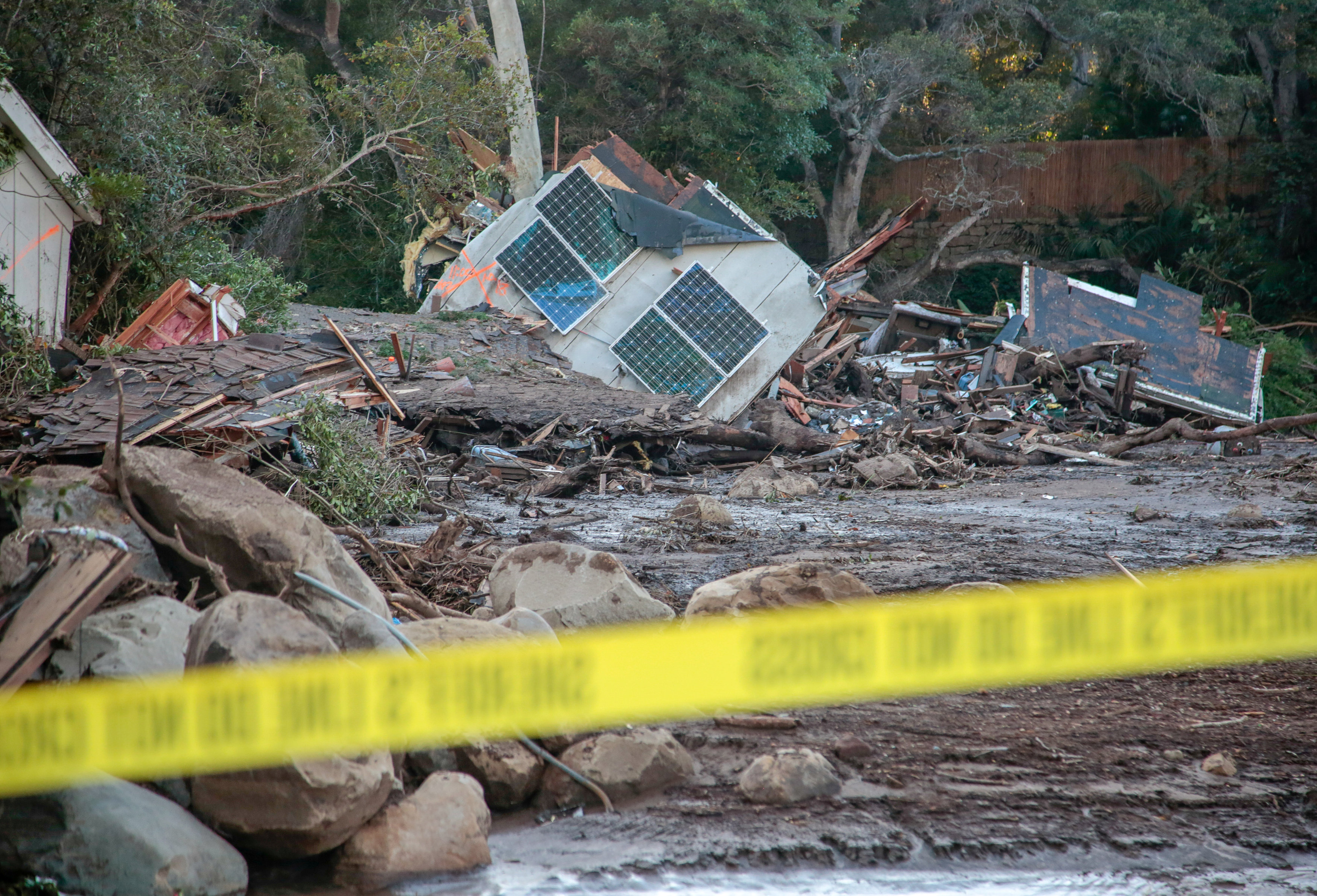 MONTECITO, Calif. (Reuters) – The search for survivors from a devastating Southern California mudslide that has killed at least 17 people moved into its third day on Friday, with some 700 rescue workers expecting to find more dead victims.

Triggered by heavy rains, the massive slide struck before dawn on Tuesday, when a wall of mud and debris cascaded down hillsides that were denuded last month by wildfires, including the Thomas Fire, the largest blaze in the state’s history.

“Realistically we suspect we are going to have the discovery of more people killed in this incident,” Santa Barbara County Sheriff Bill Brown said at a Thursday news briefing, adding that he was hoping to find “miracle” survivors.

Brown said 43 people remain missing, although some may just be out of communication.

In one of the hardest hit areas, the affluent seaside community of Montecito, the devastation wrought by the slide and the gruesome undertaking faced by emergency crews was evident.

Neighborhoods were littered with uprooted trees and downed power lines, and front yards in homes filled with mud were strewn with boulders.

Elsewhere, cars carried away by the flow were perched on mounds of earth and mangled garage doors crushed by the mud rested at odd angles.

The cause of death for all 17 victims who perished will be listed as multiple traumatic injuries due to flash flood with mudslides, the Santa Barbara Sheriff’s office said in a statement on Thursday.

The dead victims range in age from three to 89.

Josephine Gower, 69, died when she opened the door to her home, her son, Hayden Gower, told NBC station KSBY. Her daughter-in-law Sarah Gower confirmed Gower’s death in a Facebook post. Her body was found that night, near a highway hit by the slide.

“I told her to stay on the second floor, but she went downstairs and opened the door and just got swept away,” Hayden Gower said. “I should have just told her to leave. You just don’t even think that this is possible.”

The sheriff’s office also expanded the evacuation zone in the Montecito area on Thursday, as traffic on the already-clogged roads is hindering efforts by rescue and repair crews to access the devastation.

Rescue workers in helicopters and high-wheeled military vehicles, some with search dogs, were deployed in the hunt for the missing in a disaster zone littered with the remnants of hundreds of damaged or destroyed homes.

The Federal Emergency Management Agency (FEMA) granted a request on Thursday by Governor Jerry Brown for expanded financial aid that was first allocated for the Thomas Fire, the governor’s office said in a statement.

“This declaration ensures that federal funds are available for emergency response and eligible disaster recovery costs,” the governor’s statement said. 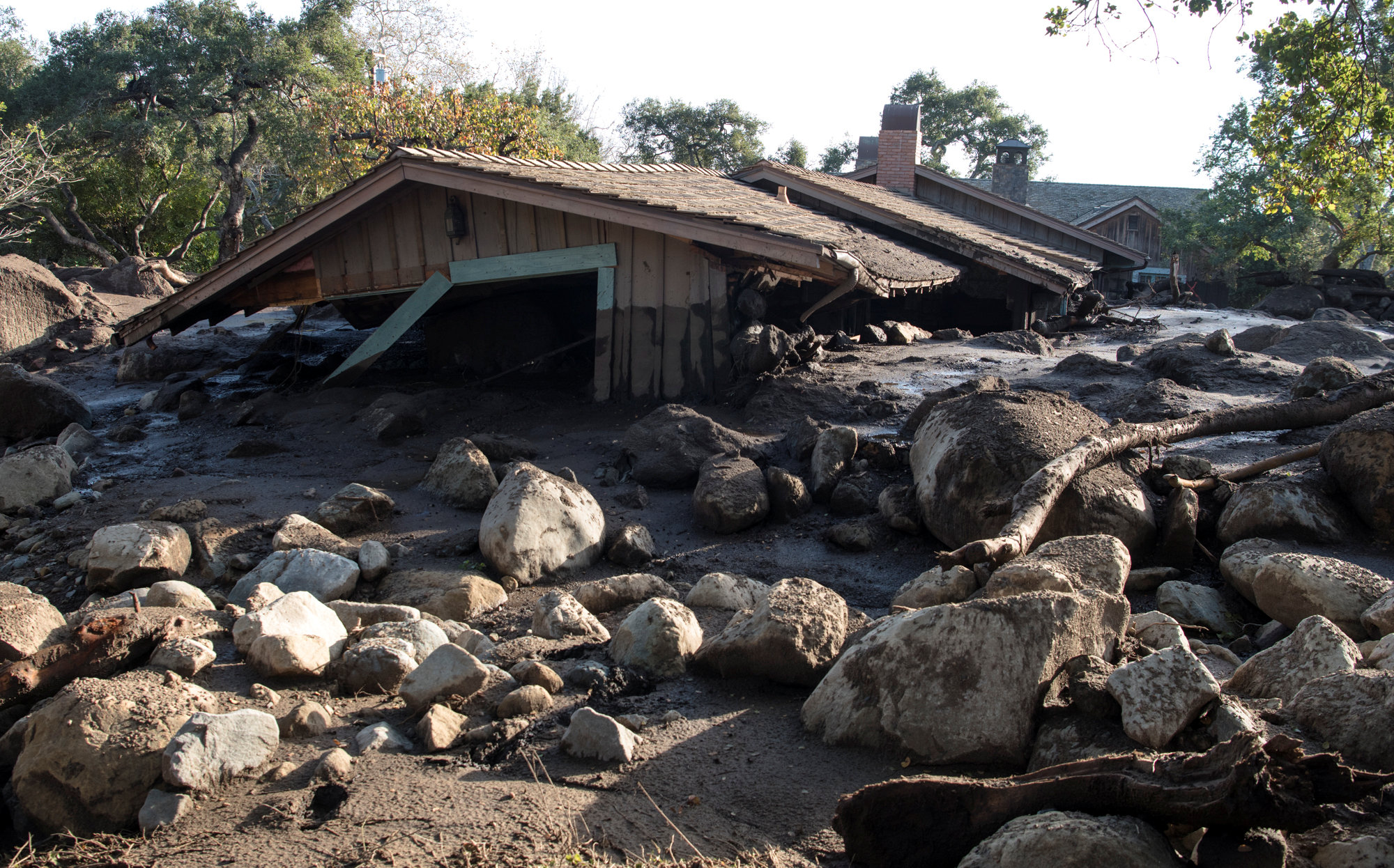 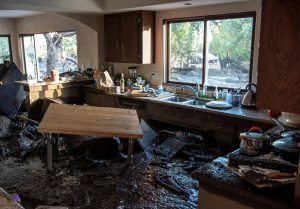 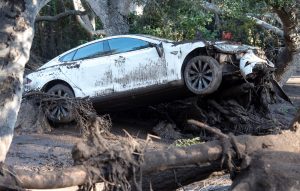 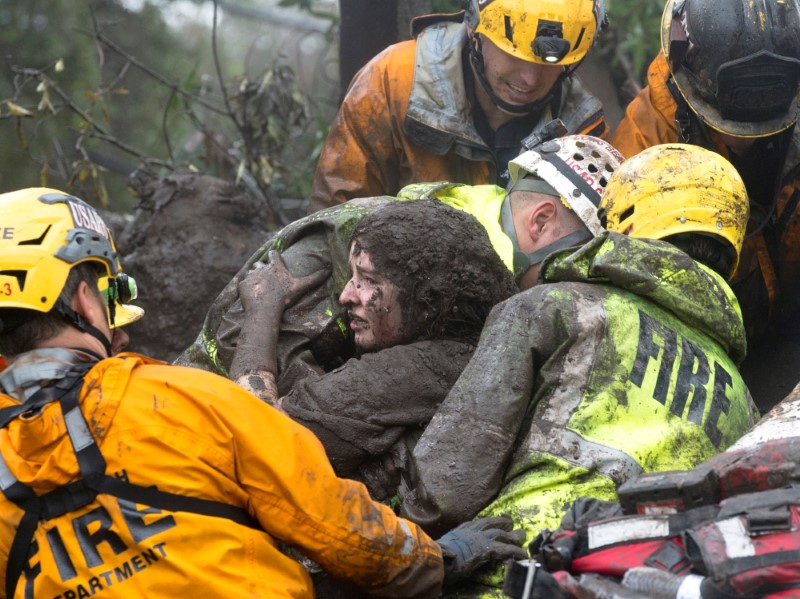 LOS ANGELES (Reuters) – California rescuers worked through the night plucking stranded Santa Barbara residents from mudslides that have killed at least 15 people and devastated the coastal community after it was drenched by rain, authorities said on Wednesday.

The death toll could go higher still as rescuers continued searching for victims, mostly in the upscale enclave of Montecito – where mudslides slammed into homes, covered highways and swept away vehicles – officials warned.

“We don’t know how many additional people are still trapped,” Santa Barbara County Sheriff Bill Brown said on the “CBS This Morning” program. “We know there are some, and we’re still making our way into certain areas of Montecito and the adjacent areas to determine if anyone is still there and still alive.” 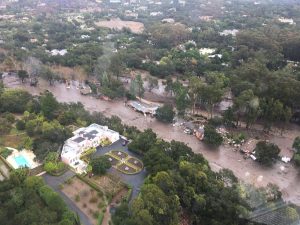 The mudslides followed an ordeal of fire and water for the area northwest of Los Angeles. A torrential downpour on Tuesday soaked the area, which was left vulnerable after much of its vegetation burned in the state’s largest wildfire last month.

Forecasters were calling for clear skies on Wednesday.

Emergency workers began their task on Tuesday using search dogs and helicopters to rescue dozens of people stranded in mud-coated rubble in the normally pristine area, sandwiched between the ocean and the sprawling Los Padres National Forest.

A 14-year-old girl was found alive on Tuesday after firefighters using rescue dogs heard cries for help from what was left of her Montecito home, the Los Angeles Times reported.

“I thought I was dead there for a minute,” the teenager Lauren Cantin, covered in mud, told NBC News after workers spent six hours rescuing her.

Rescuers worked through the night, searching for victims amid the dozens of homes that were destroyed, and using helicopters to lift more than 50 stranded residents from the mud.

“We’re finding people continuously,” said Yaneris Muniz, spokeswoman for the Santa Barbara County Joint Information Center. “We had a helicopter and several crews out all night, and now that it’s day, we’ll be able to intensify those searches.”

Officials have ordered residents in a large swath of Montecito to stay in their homes so that rescuers can better go about their work.

About 300 people were stranded in a canyon. Local rescue crews, using borrowed helicopters from the U.S. Coast Guard, worked to airlift them out, officials said. 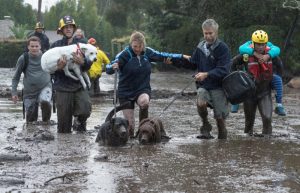 The county initially ordered 7,000 residents to evacuate and urged another 23,000 to do so voluntarily, but only 10 to 15 percent complied with mandatory orders, said Amber Anderson, a spokeswoman for the Santa Barbara County Fire Department.

The county set up an evacuation shelter at Santa Barbara City College, where some people showed up drenched in mud, and also provided a place for people to take their animals.

The number of fatalities surpassed the death toll from a California mudslide on Jan. 10, 2005, when 10 people were killed as a hillside gave way in the town of La Conchita, less than 20 miles south of the latest disaster.

Last month’s wildfires, the largest in California history, left the area vulnerable to mudslides. The fires burned away grass and shrubs that hold the soil in place and also baked a waxy layer into the earth that prevents water from sinking deeply into the ground.

Some local residents had to flee their homes due to the fires last month and again this week because of the rains.

(Reporting by Peter Szekely in New York, Rich McKay in Atlanta and Brendan O’Brien in Milwaukee; Editing by Raissa Kasolowsky and Jonathan Oatis)