Pastor Jim & Lori Bakker welcome Frank Davis as they discuss the benefits of eating a Plant Based Diet for Day 2 on The Jim Bakker Show. 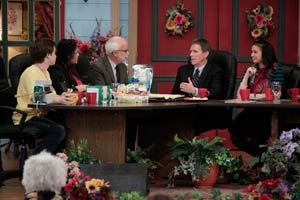 I don’t want to see my friends dying like this. We have people that are so wonderful, and they are dying because of what they are putting in their mouth. -Pastor Jim Bakker 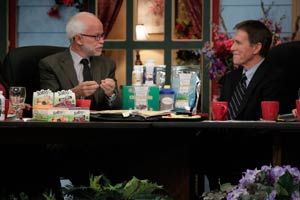 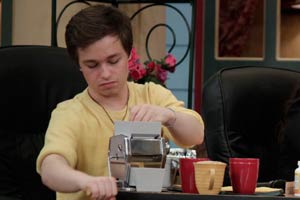 Frank Davis had every disease known to man as a child. He was raised on antibiotics, which in return destroyed his entire immune system. When he was in his late 40’s, he was diagnosed with Chronic Fatigue Syndrome. Chronic Fatigue Syndrome is a serious condition, which makes a person extremely tired and unable to function properly. To Frank, being a type A personality, this diagnosis was a sentence worse than death. A once vibrant person, he found himself at rock bottom. His body was no longer cooperating with him and he could not keep up with his daily life. In an effort to gain control of his life again, he began doing research trying to find answers. He found himself at a symposium about functional foods, this day his entire life changed. The meeting was about how foods can be used to reverse disease and overall body conditions. Intrigued by the information he obtained, he decided to make a change in his life.

Many people are surprised to learn that the foods in their grocery store do not have the nutritional value they think they do. The produce is picked before it is ripened, often travels thousands of miles and is ripened by artificial means. Most produce if framed in factory farms and they use pesticides and other unnatural ways to grow fruit and vegetables. Franks Davis’ whole goal is to go back to a holistic method of living. While his new found life started as a way to conquer his condition, it became a way of life. In the medical community, there is no cure for Chronic Fatigue Syndrome. He had a whole food nutritionist develop a vitamin with him and he began to take it. After he began the vitamins, he went for the next twelve years with not even as much as a cold. It was impressive for someone who was so sick; he had to share it with others in the same position.

When Pastor Jim went to the doctor he was told that he had growths on the back of his eyes. The growths were caused from diabetes and he would be blind. Knowing how precious his sight was, he and Lori took matters into their own hands. It has been over two years and they have been living a plant based lifestyle eating mostly fruits and vegetables. Since Lori and Pastor Jim have switched to this lifestyle, Lori has lost 32 lbs. She accomplished this with no diet and no exercise, simply by eating healthy. She started eating right and easily lost the weight; Pastor Jim on the other hand has lost a little but has gained so much in health benefits.

Pastor Jim takes two of the Nine a Day Plus vitamins. The only reason he takes two is because he is seventy two years old and works at least twelve hours days, oftentimes up to nineteen hours. He requires great energy to keep up with his active lifestyle. He firmly believes that if he had not had this wake up call, he would have lost his sight in a matter of time. After a dedicated lifestyle change, the doctor confirmed that the growths were in remission. In fact, the diabetic doctor allowed him to go completely off his medications.

The newest health craze is to put “All Natural” on a product. Just because a product says all natural, by no means is a guarantee that it is a healthy food. Actually, there are little requirement that have to go into a product to make it considered a health food. Sugar is an all-natural product, but it is not good for you. The very fact that people do not read labels and even consider what they are putting in their mouths is scary. To do the work of God we have to be able bodied. God gave us beautiful fruits and vegetables to eat. Developing a healthy overall lifestyle and their great taste, are just additional benefits.

Isaiah 5:20 NIV Woe to those who call evil good and good evil, who put darkness for light and light for darkness, who put bitter for sweet and sweet for bitter.

II Thessalonians 2:11 NCV For this reason God sends them something powerful that leads them away from the truth so they will believe a lie.

James 2:17 NKJV Thus also faith by itself, if it does not have works, is dead.

6 thoughts on “Plant Based Diet”