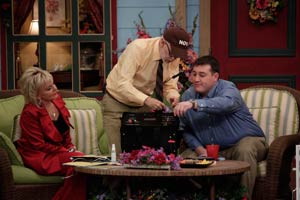 We are living in the day that Daniel saw when the seal was to be taken off. -Pastor Jim Bakker 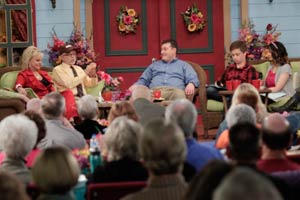 I believe something so major’s gonna happen this year, it’s gonna be an earth shifting change. -Pastor Jim Bakker 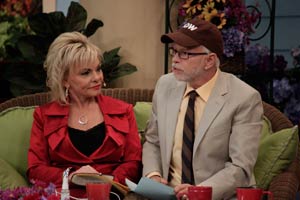 God spoke to me that I was to tell the church to get ready, so they could be the answer and not the problem. – Pastor Jim Bakker

Pastor Jim revisited the first three trumpets of Revelation 8 and the earth shaking events prophesied to follow each horn blast. He explained that apokalupsis, the Greek word for revelation, means revealed, unveiled or uncovered. He then encouraged listeners to take the time to study the book to help prepare them for what lies ahead. He drew parallels between the perilous times described in the last book of the Bible and Daniel 12, where the Old Testament prophet received an order to seal up the words given him until the time of the end, when “many shall run to and fro, and knowledge shall be increased .” The words, Pastor Jim said, describe perfectly the times in which we live.

He went on to say that his mission from God involves warning and preparing believers to strive for productivity in their spiritual lives, in order to stay away from what the Bible calls “faith without works.” Every congregation, he suggested, should be a feeding station to not only serve God’s word, but also provide food for the hungry in the coming days of severe tribulation and hardship. The condition of the American economy, he continued, has reduced the country to the status of a borrower, when decades ago America topped the list of lending countries in the world. Pastor Jim noted that in the book of Deuteronomy, God pronounces a punishment on cursed nations, saying they will lose their status as lenders and become like those in need of a helping hand.

Only more perilous times lie ahead, according to the Bible, and in keeping with the mission of providing products to help families and individuals survive coming calamities, the Pastor introduced St. John Holloway, to explain more about the Fuel-less Generator his company developed. Pastor Jim shared that he tested a unit in his home for several days to see if it lived up to expectations. He found the generator powered a mini refrigerator and also the much larger one in the kitchen of the Bakker home. He and Lori discovered that the solar panel that comes with the unit received power from sunlight and also, at nighttime, from their porch light and even from the lights from the Christmas tree they still have up.

He then explained that a special arrangement set up by Food for Health President Frank Davis allows the ministry to offer the unit for nearly $500 less than normal cost. Kevin Shorey, so impressed by the generator’s capabilities said, “It’s gonna bring security to my family, so it’s something I have to have.” Plugging the unit into an electrical socket will charge up the Fuel-less Generator which, when fully powered, can remain up to 95 percent powered for up to a year. Amazingly, a hand crank also comes with the unit to manually charge the generator in cases of power outage. Pastor Jim and Lori encouraged viewers to act with haste, as they expected the units in inventory to disappear quickly. After that time, interested parties likely would have to have their names placed on a waiting list for contact upon availability of the next order of generators.

Revelation 8:7-8 KJV The first angel sounded, and there followed hail and fire mingled with blood, and they were cast upon the earth: and the third part of trees was burnt up, and all green grass was burnt up. And the second angel sounded, and as it were a great mountain burning with fire was cast into the sea: and the third part of the sea became blood;

James 2:17 NKJV Thus also faith by itself, if it does not have works, is dead.

James 2:16 NCV If you say to that person, “God be with you! I hope you stay warm and get plenty to eat,” but you do not give what that person needs, your words are worth nothing.

Luke 21:11 KJV And great earthquakes shall be in divers places, and famines, and pestilences; and fearful sights and great signs shall there be from heaven.

Luke 21:20 KJV And when ye shall see Jerusalem compassed with armies, then know that the desolation thereof is nigh.

Luke 21:25 KJV And there shall be signs in the sun, and in the moon, and in the stars; and upon the earth distress of nations, with perplexity; the sea and the waves roaring;

Luke 21:26 KJV Men’s hearts failing them for fear, and for looking after those things which are coming on the earth: for the powers of heaven shall be shaken.

Matthew 5:45 KJV That ye may be the children of your Father which is in heaven: for he maketh his sun to rise on the evil and on the good, and sendeth rain on the just and on the unjust.

Psalm 30:5 KJV For his anger endureth but a moment; in his favour is life: weeping may endure for a night, but joy cometh in the morning.