“I think the perilous times are here and it’s going to get worse and worse, according to the scripture.” -Pastor Jim Bakker 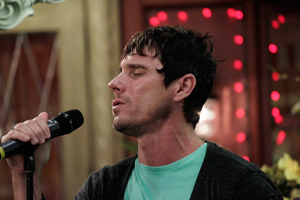 Pastor Jim began by calling attention to the recent tremors felt in the San Francisco area, which lies on the Hayward Fault line. The U.S. Geological Survey predicts this fault will most likely cause the next major California earthquake and sometime within the next three decades. These jolts came weeks after the worst day of tornado devastation in America’s history, March 2, when 86 of the twisters touched down in states from Georgia to Illinois, bringing hail and devastating winds with them. The destruction and damage to properties and structures left these areas in economic devastation, not to mention, several people lost their lives.

Prophecy, Pastor Jim said, foretells that even worse storms, disasters and perils lie ahead. He shared that he feels God led him to the Morningside area which sits in a valley surrounded by protective hills and mountains, land masses he believes spared the village from the tornado that hit nearby Branson, Missouri during the outbreak. A crew of Master’s Media students and staff traveled to the scene to film and speak with survivors, also to deliver food and supplies and even teach an emergency preparedness class to residents of a destroyed apartment complex. James Chapman recalled that the storm left many of the homes and buildings without walls or ceilings.

His grandfather, Pastor Jim, then asked what will happen when the Bible’s words manifest and these storms and catastrophes start occurring simultaneously in several places or one right after the other. “What happens if we have 10,000 earthquakes?” Lori pointed out that the government’s answer involves telling people to prepare to take care of themselves for at least three months, as far as their survival needs of food, water and money. Pastor again took the opportunity to stress the need for preparedness and having a plan for survival already in place.

He desires to work in cooperation with every ministry in the area to develop a plan of action, and suggested every region of the country establish a similar coalition that, in cases of extended power outage, storm devastation or other unexpected calamity, can offer much needed assistance and resources to the suffering masses. He specifically voiced concern for those living in Michigan, Minnesota and Canada, wondering how they will stay warm should a long term power outage strike that region during the cold of winter. This is why he loves fireplaces and finds them a necessity for any survival plan, along with wood burning stoves. Both of these items make up the decor of the Morningside tabernacle, and installed on the outside of the building is an old fashioned water pump for use should something happen to disrupt operation of indoor plumbing.

Concerning water, he referenced a recent study done on bottled water products which found that, although marketed as coming from natural springs, many of these plastic bottles contain common tap water. Lack of regulation in the industry, allows this type of deception to exist. This brought the Pastor to Revelation 8:10 and the blowing of the third trumpet, an act followed by a star falling to earth and poisoning one-third of the rivers, or specifically the drinkable, running water, per the meaning of the original Greek word. John the Revelator saw these things long ago, Pastor Jim said, encouraging the church to undertake an in-depth study of the book of Revelation.

Revelation 1:1 …which when they happen, will happen in a short period of time…

Revelation 8:7 KJV The first angel sounded, and there followed hail and fire mingled with blood, and they were cast upon the earth: and the third part of trees was burnt up, and all green grass was burnt up.