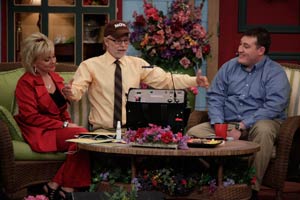 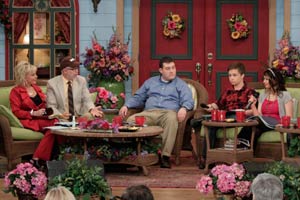 This is the invention of our generation I’ve prayed for this thing to happen. -Pastor Jim Bakker 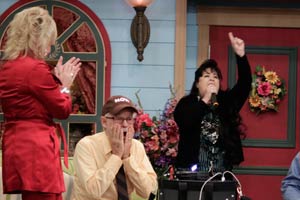 You don’t appreciate light until you’re in the dark. – Pastor Jim Bakker

Pastor Jim and Lori welcomed St. John Holloway, General Manager of Humless Power Systems, a company founded in 2010 that went on to develop a line of silent and portable power sources, including the Fuel-Less Generator recently added to the line of survival products offered by the Pastor’s ministry. In previous programs, he admitted testing one of these units in his home but wanted to wait awhile before putting his stamp of approval on it. After putting the generator through a thorough trial, however, and finding it completely reliable and able to live up to its intended purpose, he enthusiastically put his full support behind the product. His recommendation moved Frank Davis, President of Food for Health, to purchase rights, enabling him to offer units at special reduced dollar price point.

The generator weighs 40 pounds but runs silently, and comes with carrying straps and a panel containing outlets for items with electrical cords, USB ports for charging of cell phones, laptops or iPods, and two car phone charger outlets. Once powered up, the generator can hold its charge for up to a year, losing only five percent of power at the end of that time, if any at all. The generator also comes with two solar panels that also serve as sources of alternative power. For an additional love gift, an accessory pack which includes a wheeled carrying cart for easy transport of the unit, a 20 foot car charger extension cord, USB battery charger, a low voltage heating blanket and a universal adapter is available.

The generator’s small size makes it easy to fit into a car trunk or the back of an SUV and Pastor Jim noted how handy it would come in during a camping trip. He went on to say that those with whole house generators could benefit by also having a Fuel-less Generator since gas powered units become useless when out of fuel, particularly in the event of a widespread power outage which makes pumping gas at the service station impossible.

Pastor Jim and Lori showed great enthusiasm over the generator and predicted it would disappear quickly. Pastor encouraged viewers to continue preparing themselves to survive the disasters prophesied to happen and to seek God’s guidance on finding a place to go in time of distress and emergency. He said that all those who order the Fuel-less Generator receive a complementary Morningside Sunrise Club Card which grants them lifetime membership and priority access to the Wilderness campgrounds and facilities at Morningside.

Lori encouraged all denominations of Christians to stop the bickering, come together in one accord and work together to ready themselves for the trying times ahead by storing up food and survival supplies and equipment. “This is our time to shine,” she said, taking into consideration how many people the church could help. “Let the world see we’re there to help them. They’re gonna come.”

In closing the show, Kevin Shorey delivered a complete shock and surprise with his song selection. “I think this is about the best version of this song you’ve ever heard in a long time,” he told Pastor Jim. He sang the first line of the tune and then a female voice somewhere backstage took over singing the rest. As Pastor looked to Lori trying to figure out what was going on, Lori stood up and started clapping while looking toward the stage door to the rear. Pastor Jim turned around, saw his daughter Tammy Sue coming through the door singing and he grabbed his face, breaking down into tears, as did some members of the audience.

Lamentations 3:22-23 NCV The Lord’s love never ends; his mercies never stop. They are new every morning; Lord, your loyalty is great.

Psalm 30:5 KJV For his anger endureth but a moment; in his favour is life: weeping may endure for a night, but joy cometh in the morning.

Psalm 113:3 KJV From the rising of the sun unto the going down of the same the LORD’s name is to be praised.

Proverbs 11:30 NKJV The fruit of the righteous is a tree of life, And he who wins souls is wise.

Joel 2:32 NKJV And it shall come to pass That whoever calls on the name of the Lord Shall be saved. For in Mount Zion and in Jerusalem there shall be deliverance, As the Lord has said, Among the remnant whom the Lord calls.

Matthew 24:30-31 NCV At that time, the sign of the Son of Man will appear in the sky. Then all the peoples of the world will cry. They will see the Son of Man coming on clouds in the sky with great power and glory. He will use a loud trumpet to send his angels all around the earth, and they will gather his chosen people from every part of the world.

Joel 2:28 NKJV “And it shall come to pass afterward That I will pour out My Spirit on all flesh; Your sons and your daughters shall prophesy, Your old men shall dream dreams, Your young men shall see visions.

Joel 2:31 NKJV The sun shall be turned into darkness, And the moon into blood, Before the coming of the great and awesome day of the Lord.

Revelation 8:7 KJV The first angel sounded, and there followed hail and fire mingled with blood, and they were cast upon the earth: and the third part of trees was burnt up, and all green grass was burnt up.

Revelation 6:14 NCV The sky disappeared as a scroll when it is rolled up, and every mountain and island was moved from its place.

3 thoughts on “The Fuel-Less Generator”