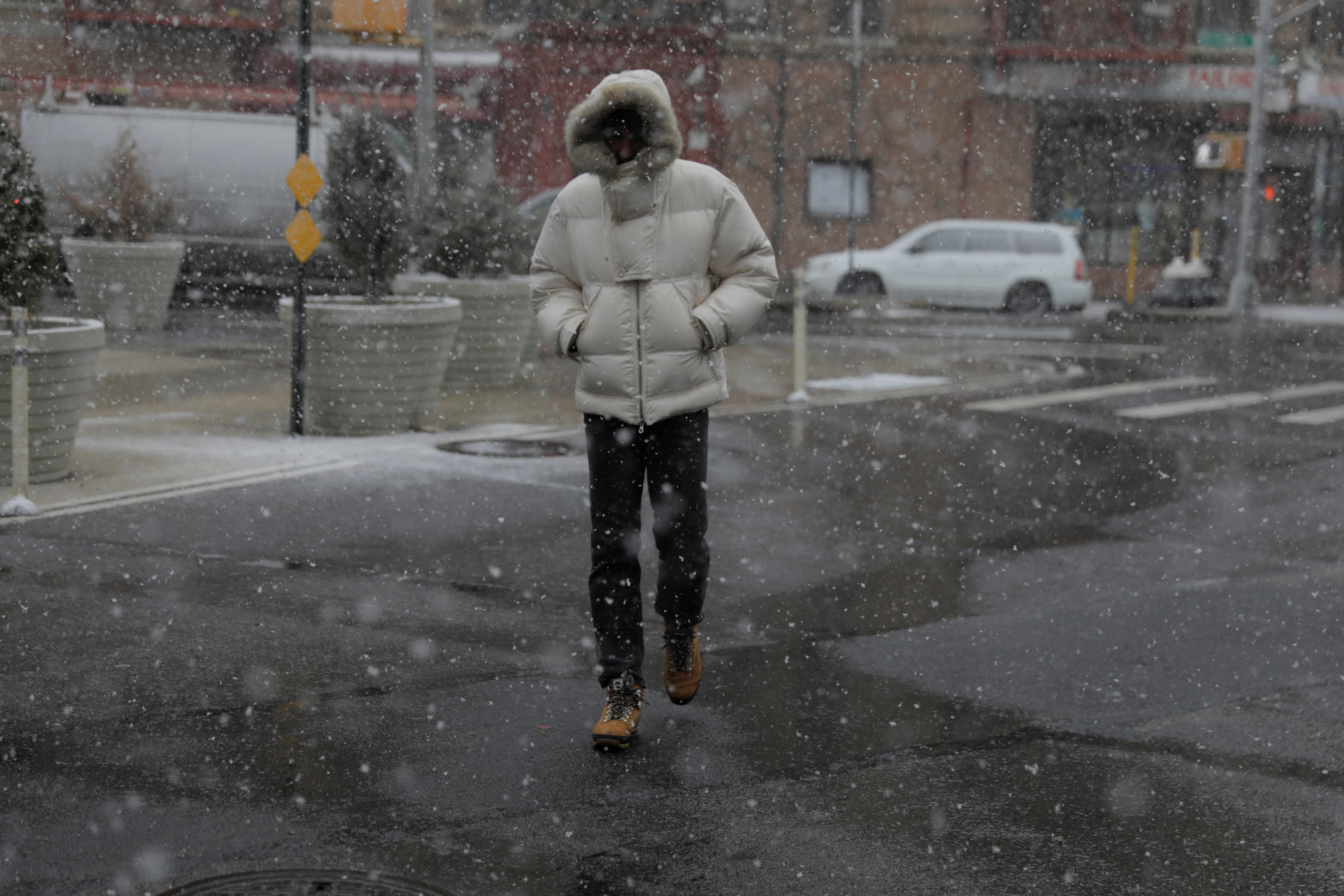 (Reuters) – Millions of commuters along the U.S. East Coast will face another round of heavy snow, ice and wind gusts on Wednesday when the fourth major snow storm this month strikes the region, closing schools, grounding flights and halting buses and trains.

The nor’easter storm is on track to dump up to a foot of snow and bring gusts of up to 50 miles per hour (80 kmph) to major cities such as New York, Philadelphia and Boston on Wednesday and into Thursday, the National Weather Service said.

“Significant amounts of snow, sleet and ice will make travel very hazardous or impossible,” the service said in an advisory for New Jersey.

More than 2,000 flights had already been canceled on Tuesday evening at the three major airports that serve New York. Airlines said they were waiving fees to change flights from and to the East Coast.

The storm forced schools across the region including those in Philadelphia and New York, the largest school district in the United States, to cancel classes on Wednesday.

“For everyone’s safety, because it could be such a big storm … we want to be ahead of it,” New York Mayor Bill de Blasio said on Tuesday.

Both Greyhound bus service and Amtrak passenger train service suspended or abbreviated routes for the day. Throughout the East Coast, local bus and train services that millions of people rely on to commute to and from work and school also canceled service on Wednesday.

Widespread power outages were also expected on Wednesday as heavy snow and ice along winds may topple trees and power lines, the service said.

The latest storm comes after storms on March 2, 7 and 12 left at least 9 people dead across the region and more than 2 million homes and businesses without power.

(Reporting by Brendan O’Brien in Milwaukee; Editing by Amrutha Gayathri) 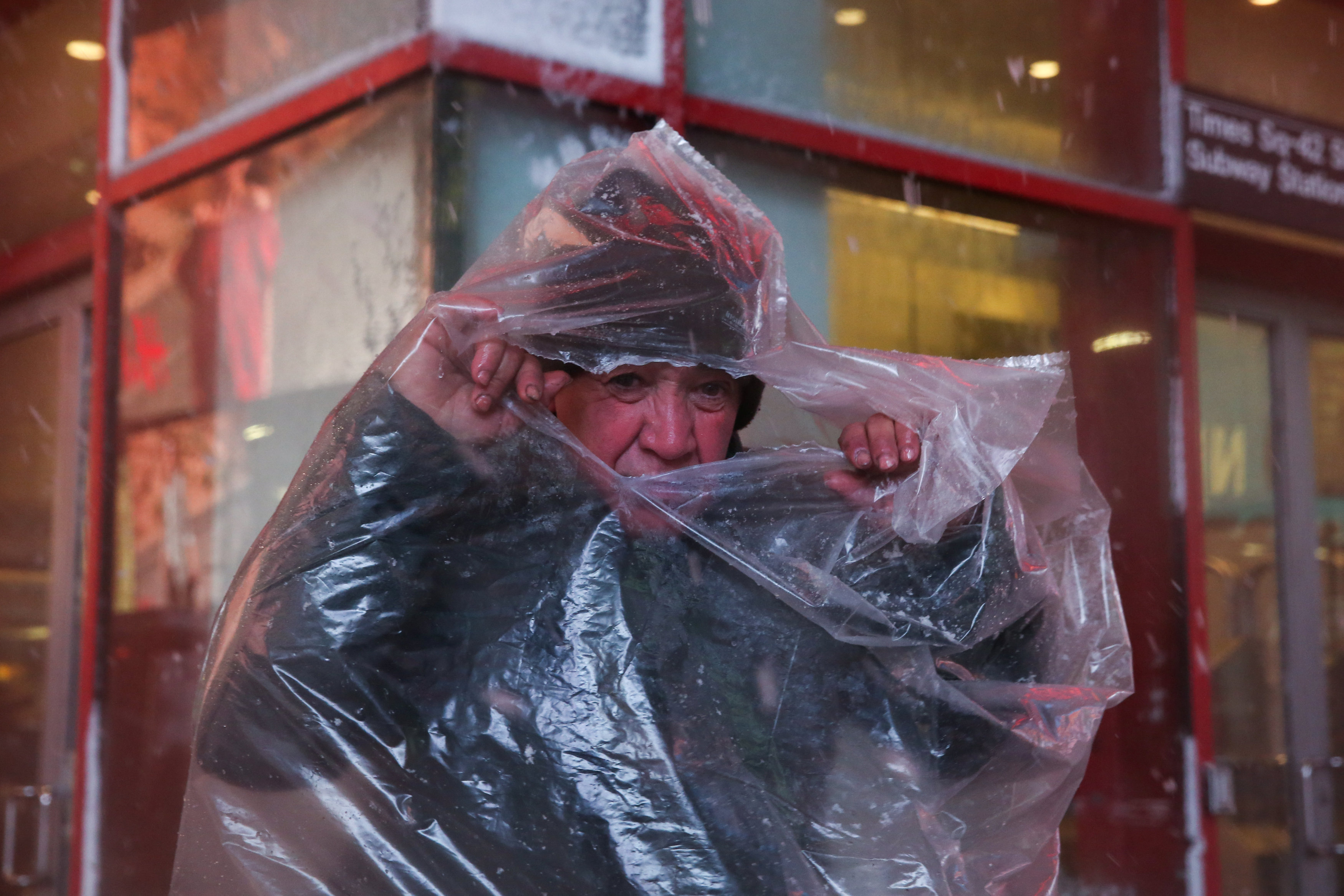 NEW YORK (Reuters) – The second winter storm in a week will continue to dump wet, heavy snow on New England on Thursday, forcing schools to close and leaving hundreds of thousands without power as it promised to slow the morning commute across the region.

A foot (30 cm) of snow and fierce wind gusts of up to 55 miles per hour (88 km/h) were expected from eastern New York through northern Maine on Thursday after the storm slammed the region on Wednesday, the National Weather Service said in several watches and warnings.

Up to 2 feet of snow accumulation was expected in some inland parts of New Jersey, New York, Connecticut and Massachusetts and 18 inches was possible in Maine.

Boston public schools along with dozens of schools throughout New England canceled classes on Thursday as local officials and forecasters warned commuters of whiteout conditions and slick roads.

Two dozen flights were already canceled early on Thursday morning after about half of all scheduled flights were canceled at the three major airports serving New York City on Wednesday.

The website said more than 2,100 flights had been delayed and 2,700 canceled, most of them in the Northeast, as of 8 p.m. local time on Wednesday.

The dense snow and strong winds downed trees and power lines, knocking power out for hundreds of thousands in New England and the Mid Atlantic, according to Poweroutage.us, a website that tracks outages.

“4am, no power (no heat), waiting for a text from work to say “we will be closed today”. Fingers crossed!” tweeted Jessica Squeglia in Peabody, Massachusetts.

The governors of New Jersey and Pennsylvania declared states of emergency, giving them access to support from the U.S. government if needed.

Last week’s storm brought major coastal flooding to Massachusetts, killed at least nine people and knocked out power to about 2.4 million homes and businesses in the Northeast. 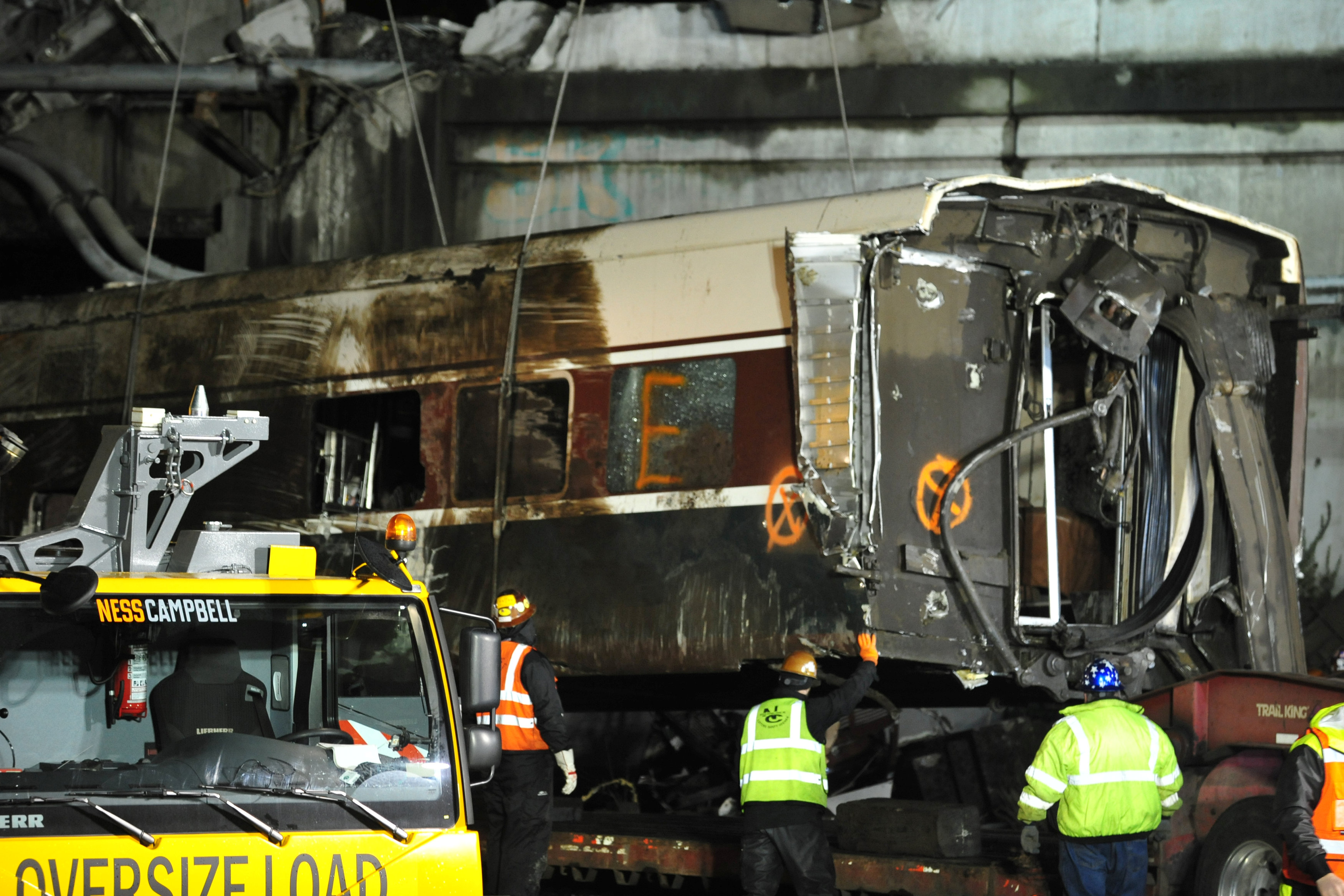 DUPONT, Wash. (Reuters) – U.S. safety inspectors probing the deadly wreck of a passenger train that careened off a bridge onto a highway in Washington state are eager to question the engineer and a conductor-in-training who were in the cab of the locomotive, officials said on Tuesday.

National Transportation Safety Board (NTSB) officials hoped interviews with all crew members would shed light on why Train 501 on Amtrak’s Cascades line was going more than twice the speed limit around a curved stretch of track when it derailed on Monday.

The accident occurred during the train’s inaugural run on a new, slightly quicker route between Olympia and Tacoma, with 86 people aboard, 80 of them passengers, Amtrak said.

NTSB officials said they planned to interview all the crew members in the next two days, once they sufficiently recover from injuries suffered in the wreck, including the conductor-in-training who was with the engineer at the time.

Safety board member T. Bella Dinh-Zarr told reporters that NTSB investigators would seek to determine, among other factors routinely examined, whether the engineer was distracted while driving the ill-fated train.

“Distraction is one of our most-wanted-list priorities at the NTSB,” she said.

She also said investigators had determined that the train’s emergency brakes were automatically activated while the derailment was occurring, rather than engaged manually by the engineer.

In addition, she confirmed that a safety system known as positive train control (PTC), which automatically slows trains if they go too fast, was not installed on the rail line. She said Congress had extended a mandatory deadline for having the PTC system installed on all passenger railways to 2018.

None of the crew has been identified. All were hospitalized, Dinh-Zarr said.

Three people aboard the train were killed when all 12 carriages and one of the train’s two locomotives tumbled off the rails onto Interstate 5 near the town of DuPont, about 50 miles south of Seattle, officials said. Another 100 people were taken to hospitals, 10 with serious injuries.

Some motorists were among the injured, though nobody on the highway died.

Recorded data recovered from the rear locomotive showed the train was going 80 miles (129 km) per hour on a bend in the track where the speed limit was 30 mph (48 kph), NTSB officials said on Monday night. The board said it was investigating whether other circumstances besides speed were involved, such as track conditions, signals, mechanical issues and human factors.

Speaking at an afternoon news conference on Tuesday, Dinh-Zarr said that a conductor “who was getting experience and familiarizing himself with the territory” was present in the locomotive cab with the engineer. NTSB spokesman Peter Knudson described that second Amtrak employee as a “conductor-in-training.”

Dinh-Zarr said it was not unusual for conductors who are learning a new train route to ride in the cab with the engineer. She said another conductor was posted in the passenger section of the train at the time. 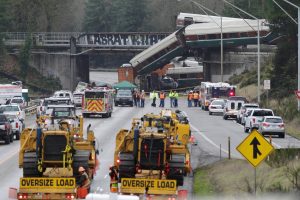 FILE PHOTO: Rescue personnel and equipment are seen at the scene where an Amtrak passenger train derailed on a bridge over interstate highway I-5 in DuPont, Washington, U.S., December 18, 2017. REUTERS/Steve Dipaola/File Photo

Meanwhile, workers lifted mangled train cars onto flatbed trucks from the wreckage site, using two towering cranes in wet, windy weather as they sought to reopen the southbound lanes of Interstate 5, a major West Coast highway stretching from the Canadian border to Mexico.

They expected to remove five of the cars and the locomotive by Tuesday afternoon and take them to a nearby U.S. military base for further examination, officials said.

The locomotive alone weighs more than 270,000 pounds (120 tonnes) and will require an extra-large truck to move, Dan Hall, the regional commander for the Washington State Patrol, said at a news conference.

The southbound stretch of Interstate 5 will remain closed for several days, the Washington State Department of Transportation said.

At least two of the three people who died in the derailment were transit enthusiasts who wanted to see the maiden run of a new route for the train line, said Abe Zumwalt, director of policy research for the Rail Passengers Association.

Jim Hamre and Zack Willhoite were members of the association, the Washington, D.C.-based organization said in a statement identifying the two men as victims of the wreck. Willhoite worked for a local transportation agency, Pierce Transit, as a customer service support specialist.

“They were best friends and they took all kinds of trips together, and given that yesterday was an inaugural run on a service that both had advocated for tirelessly, it made sense that they were on board,” Zumwalt said in a phone interview. 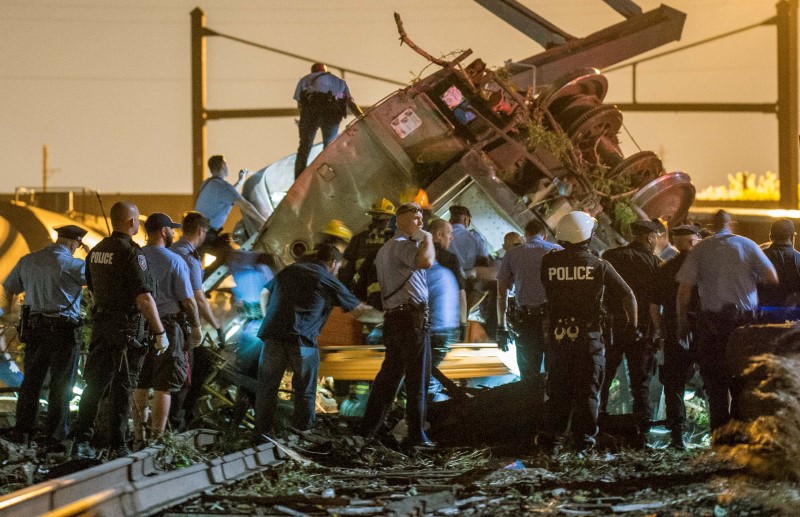 (Reuters) – The engineer in a deadly 2015 Amtrak train crash in Philadelphia has been charged with involuntary manslaughter, Pennsylvania Attorney General Josh Shapiro said in a statement on Friday, even though local prosecutors had cleared the engineer of criminal wrongdoing earlier in the week.

In addition to eight counts of involuntary manslaughter, former Amtrak engineer Brandon Bostian was charged with one count of causing or risking a catastrophe and numerous counts of reckless endangerment, according to Shapiro’s statement.

The attorney’s general office did not say when Bostian will be arraigned. He is expected to surrender to make a court appearance but that will not likely happen Friday night, officials said.

The Philadelphia district attorney’s office on Tuesday said it did not have enough evidence to charge Bostian and closed the case.

But a Philadelphia municipal court judge on Thursday ordered the charges of involuntary manslaughter and reckless endangerment against Bostian to be revived.

The district attorney’s office had said evidence indicated the derailment was caused by the engineer operating the train far in excess of the speed limit, but it found no evidence that he acted with criminal intent.

To avoid a conflict of interest, prosecutors referred the case against Bostian to Shapiro’s office.

Under state law, Friday marks the two-year deadline to charge Bostian in the May 12, 2015, crash, which killed eight people and injured more than 180.

In May 2016, the National Transportation Safety Board said in a report that Bostian was probably distracted by radio traffic when the crash occurred.

A federal judge in October approved a record $265 million settlement for the accident victims. A lawyer for Bostian did not immediately respond to requests for comment on Friday.

The Metropolitan Transportation Authority said it was stepping up security on its commuter rail lines due to the State Department’s worldwide terrorist alert on Friday.