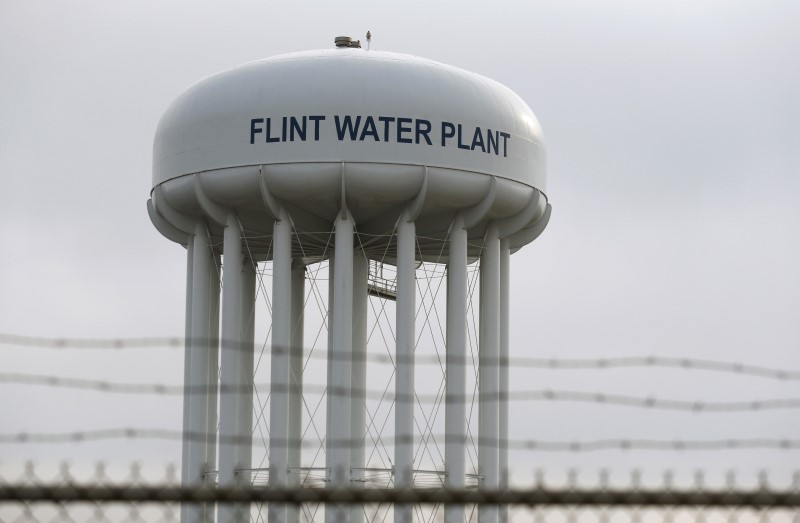 DETROIT (Reuters) – Federal officials said on Thursday it is safe for anyone to drink properly filtered water in Flint, Michigan, where a public health crisis erupted after residents were exposed to dangerously high levels of lead.

The U.S. Environmental Protection Agency (EPA) said in a statement that the most recent testing at nearly 50 locations in the city showed lead levels far below the levels considered dangerous.

But the city’s mayor said some homes in Flint cannot be fitted with filters, so bottled water is still needed.

Flint, with a population of about 100,000, was under control of a state-appointed emergency manager in 2014 when it switched its water source from Detroit’s municipal system to the Flint River to save money. The city switched back in October.

The river water was more corrosive than the Detroit system’s and caused more lead to leach from aging pipes. Lead can be toxic, and children are especially vulnerable. The crisis has prompted lawsuits by parents who say their children have shown dangerously high levels of lead in their blood.

The EPA, which worked in coordination with the U.S. Centers for Disease Control (CDC) in the testing, said properly filtered water is safe even for pregnant and nursing women, and children, groups more susceptible to the effects of lead poisoning.

“Residents can be confident that they can use filtered water and protect their developing fetus or young child from lead,” U.S. Department of Health and Human Services Assistant Secretary Dr. Nicole Lurie said in a statement. Lurie has led federal support efforts for the Flint crisis.

The EPA said the filters distributed by the state of Michigan effectively remove lead or reduce it to levels well below the level of 15 parts per billion at which federal officials say action is needed. In the testing, nearly all filtered water tested below 1 part per billion. In January, water samples tested above 150 parts per billion.

“This good news shows the progress we are making with overall water quality improving in Flint,” Michigan Governor Rick Snyder said in a statement.

Snyder has been criticized for the state’s poor handling of the crisis.

Flint Mayor Karen Weaver noted that some homes have faucets where the filters do not fit. “This is not the ultimate solution,” she said in a statement. “We still need new infrastructure, replacing the lead-tainted pipes in the city remains my top priority.”

(Reporting by Ben Klayman in Detroit; Editing by David Gregorio)

WASHINGTON (Reuters) – A congressional panel on Tuesday criticized the Environmental Protection Agency and Michigan officials for failing to do more to sound the alarm about high levels of lead in the city of Flint’s drinking water.

“What happened in Flint can never happen again. It is almost unbelievable how many bad decisions were made,” said Representative Jason Chaffetz, a Utah Republican who chairs the House Oversight and Government Reform Committee.

“Government at every level – local, state and federal – made poor decisions.”

Flint, a predominantly African-American city of 100,000 about 60 miles northwest of Detroit, switched its water supply from the Detroit water system to the Flint River in April 2014 to cut costs. The river’s corrosive water leached lead from city pipes, creating a public health threat marked by high lead levels in blood samples taken from children.

Lead is a toxic agent that can damage the nervous system.

The crisis has drawn national attention and led to calls for Michigan Governor Rick Snyder to resign. It has also led to several lawsuits in state and federal courts, and federal and state investigations.

The water supply was switched back to the Detroit system last October.

At Tuesday’s hearing, a former regional EPA head, Susan Hedman, who resigned in February, was criticized by members of the committee for not acting sooner to use her powers as the regulator to better protect Flint residents. She defended herself, however.

“I don’t think anyone at the EPA did anything wrong, but I do believe we could have done more,” Hedman said. “I did not sit silent.”

Representative Buddy Carter, a Georgia Republican, blasted Hedman as well. “I’m sorry, there’s a special place in hell for actions like this,” he said of the former EPA official’s tenure before the Flint crisis mushroomed into a national story.

Darnell Earley, a former state-appointed emergency manager in Flint, also was criticized for failing to ask enough questions about the safety protocols in place at the time of the city’s water-source switch.

Governor Snyder and EPA Administrator Gina McCarthy are scheduled to testify before the same panel on Thursday.

Internal EPA memos and emails Chaffetz released about the crisis raised questions about the agency’s actions and the state’s incompetence.

“Lead lines + no treatment = high lead in water = lead poisoned children,” Miguel Del Toral, an EPA official critical of the agency, wrote in a Sept. 22, 2015, email to other agency officials. “At every stage of this process, it seems we spend more time trying to maintain state/local relationships than we do trying to protect the children.”

In July 2015, EPA official Jennifer Crooks said in a summary of an agency meeting on Flint that “it doesn’t make sense to discuss with the state what happened in the past … as the state sees the lead levels climbing, I don’t see the benefit in rubbing their nose in the fact that we’re right and they’re wrong.”

“I can’t help but comment on the qualities that seem to be valued in administrators at the EPA: willful blindness, in this case to the pain and suffering of Flint residents; unremorseful for their role in causing this man-made disaster; and completely unrepentant,” he told the committee on Tuesday.

He said the EPA has never apologized for what happened in Flint. “I guess being a government agency means you never have to say you’re sorry,” Edwards said.

The head of the Environmental Protection Agency (EPA) is admitting the toxic sludge released into the Animas River by an EPA work crew is going to pollute rivers all the way into Mexico.

EPA Administrator Gina McCarthy admitted waters will be polluted into Utah, New Mexico, the Navajo Nation reservation and into Mexico.  McCarthy said at a press conference they would use the “full breadth of the agency” to try and clean up their spill.

“We’re working around the clock,” McCarthy said. “It pains me to no end to see this happening.”

While they admitted they are the source of the leak, EPA official say they still don’t know exactly what happened to cause the toxic waste to reach the river.

“We’ve launched an independent investigation to see what happened, and we’ll be taking steps to ensure that something like this doesn’t happen again,” Shaun McGrath, the EPA administrator in charge of the region, told reporters on Monday.

Officials said the Animas River and the San Jan River into which the Animas feeds will be closed to the public at least until August 17th because of the toxic metals in the water.   Durango, Colorado and the New Mexico cities of Aztec and Farmington have been forced to shut off their river intakes for resident water supplies.

The EPA workers also admitted that many of the heavy metals will sink into the sediment of the rivers and could be stirred up when a major storm hits the region causing flooding or increased water flow.

Claims are now being made against the EPA by local residents who have suffered hardship because of the spill.  Under federal law, the EPA is financially responsible for damaged caused by any mistakes made in clean up of toxic sites.

The Environmental Protection Agency (EPA) is coming under fire after first releasing a toxic plume of contaminated mine water into the Animas River and then misleading the public about the size of the spill.

The EPA initially told the public last week the amount of toxic waste, which had turned the Animas River orange, was one million gallons.   The EPA admitted Sunday the spill was actually closer to three million gallons.

On Sunday, Shaun McGrath of the EPA told reporters in a teleconference that the mine is still spilling 500 gallons of toxic water a minute but that it’s being contained in four lakes near the site of the spill where it can be treated by EPA officials.

“Yes, those numbers are high and they seem scary,” Deborah McKean, chief of the EPA Region 8 Toxicology and Human Health and Risk Assessment, told reporters. “But it’s not just a matter of toxicity of the chemicals, it’s a matter of exposure.”

Residents who have water wells near the river have been told not to use their water until they can have it tested for the toxic chemicals.  The toxic sludge has been moving downriver into parts of the Navajo Nation indian reservation and into northwest New Mexico.

The EPA has been criticized by state officials in Colorado and New Mexico for failing to report the incident to them.  New Mexico’s Governor, Susana Martinez, said that the New Mexico government only learned of the spill when local indian nation officials reported something was wrong with the river.

“It’s completely irresponsible for the EPA not to have informed New Mexico immediately,” she said after flying over the affected rivers.