Pastor Jim & Lori Bakker with Rabbi Jonathan Cahn and Steve Strang as they discuss the Success of the Harbinger for Day 3 on The Jim Bakker Show. 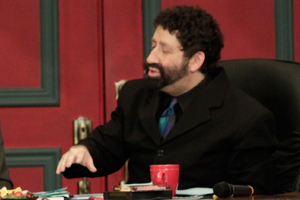 “America better hear this message. We’ve got to go to the next level with The Harbinger.” -Pastor Jim Bakker

“It’s a normal thing to talk to God, but people today are really astonished by all of this.” – Pastor Jim Bakker 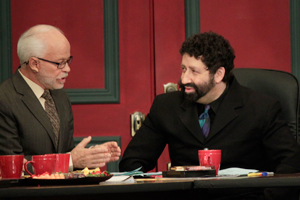 “God never wants us to stop being surprised by God because if we do, then it’s not God. We should always be astonished by God.” -Rabbi Jonathan Cahn 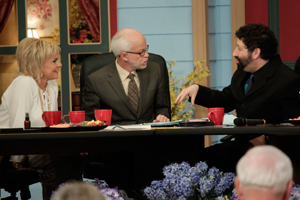 Pastor Jim and Lori Bakker welcomed guests Rabbi Jonathan Cahn, and Steve Strang, Publisher and Founder of Charisma Magazine. The Rabbi took time to discuss more from his book “The Harbinger” and the warnings and signs for America related to the terrorist attacks of 9/11 that God allowed to happen as He temporarily removed His hand of protection from the nation. This breach, that permitted the disaster to happen, starts off the first of the nine harbingers, all of which, involve prophecies contained in Isaiah 9:10.

Ancient Israel, in that scripture, refused to see that God allowed destruction to happen, desiring that His chosen and blessed nation would repent of their rebelliousness. Instead, the leaders of Israel led the nation down the path of defiance and determination to rebuild and become even bigger, better and stronger than before. Humility and repentance had nothing to do with their actions, which instead indicated a spirit of arrogance and self-determination. America’s response to 9/11, Rabbi Cahn noted, parallels almost exactly that of ancient Israel, even down to the nation’s leaders, repeatedly speaking and proclaiming the verse from Isaiah in public and official speeches meant to inspire and encourage the public.

The Rabbi said that after the wake-up call of 9/11, numbers of people flocked to houses of worship and many were unafraid to mention God’s name in regular conversation, however, this “shadow of a revival” lasted only three weeks. After that, business in the nation returned to normal and the country now, he declared, has turned a deaf ear to God. Based on prophecy and the history of ancient Israel, this means more chastisement for the nation lies ahead, including the sixth harbinger, or the fallen tree. Rabbi Cahn explained that this symbolism in the Bible relates to national judgment since it is God who plants trees like nations and determines whether they flourish and grow or must undergo an uprooting.

In another issue related to the rebelliousness of people against God, Pastor Jim mentioned how one opponent of Lori’s House found a loophole in local laws and, along with 15 others, succeeded in forcing the cessation of construction on the home intended to help and support pregnant mothers and provide anti-abortion alternatives for them. The Pastor said that nearly half a million dollars had already been invested in preparing the site but added that the mission continues. The selection of another location has already taken place and plans are to construct Lori’s House there.

He urged viewers to pray and intercede for the project, keeping in mind that one thing “God can’t wink at” is the murder of innocent children. The Lord brought chastisement to ancient Israel because of the people sacrificing children to idols and Pastor Jim and Rabbi Cahn agreed that abortion, or the results of it, falls into the same category as ancient Israel’s sin. A nation killing millions of babies cannot secure the favor of God, which only reinforces the call for repentance stressed in “The Harbinger.”

Isaiah 5:20 KJV Woe unto them that call evil good, and good evil; that put darkness for light, and light for darkness; that put bitter for sweet, and sweet for bitter!

Jeremiah 32:35 KJV And they built the high places of Baal, which are in the valley of the son of Hinnom, to cause their sons and their daughters to pass through the fire unto Molech; which I commanded them not, neither came it into my mind, that they should do this abomination, to cause Judah to sin.

Isaiah 9:10 NCV “These bricks have fallen, but we will build again with cut stones. These small trees have been chopped down, but we will put great cedars there.”

Esaias 9:10 Septuagint Bible – The bricks are fallen down, but come, lust us hew stones, and cut down sycamores and cedars, and let us build for ourselves a tower.

Isaiah 9:9 NKJV All the people will know— Ephraim and the inhabitant of Samaria— Who say in pride and arrogance of heart:

Isaiah 9:11 KJV Therefore the Lord shall set up the adversaries of Rezin against him, and join his enemies together;

Isaiah 9:10 NIV “The bricks have fallen down, but we will rebuild with dressed stone; the fig trees have been felled, but we will replace them with cedars. ”

Matthew 22:37 NCV Jesus answered, ” ‘Love the Lord your God with all your heart, all your soul, and all your mind.

Matthew 22:39 NCV And the second command is like the first: ‘Love your neighbor as you love yourself.

3 thoughts on “The Success of the Harbinger”