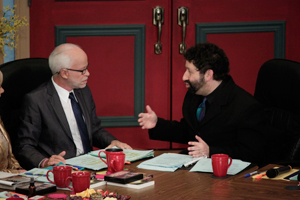 “It’s good to have friends who hear from God.” -Pastor Jim Bakker 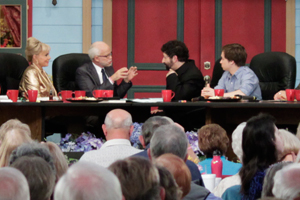 “If someone leaves you, they were not your friend. Friendship is forever.” – Pastor Jim Bakker 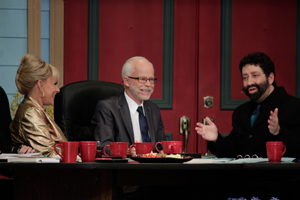 Pastor Jim and Lori Bakker welcomed Rabbi Jonathan Cahn for day four of his teaching on the nine harbingers. This show, however, they spent time focusing on some of the Rabbi’s personal history and how he came to the Lord. The Jewish minister explained that the Hebrew name for Jonathan means “God has given,” or “Gift of God.” His parents chose David as his middle name and the two names together signify God giving a beloved gift. He traces his lineage back to Moses’ brother Aaron and the priestly tribe of Levi.

Pastor Jim commented that the name Jonathan, to him, means a friend and he told Rabbi Cahn how much he valued his friendship. Many in today’s world, he continued, fail to understand the true meaning of the term, or that the Bible defines a friend as one who sticks closer than a brother and loves at all times. He then used a specific example of how some allow so-called friends to bring disruption to their lives. “I’ve heard more women get divorced because their girlfriends told them to,” Pastor Jim said, as he and Lori marveled at how the conversation took a turn in that direction.

The Rabbi said that apparently there were people listening who needed to hear that statement. He then went on to tell the story of how it took two near-death experiences to get him to turn his life over to God and focus on ministering. He grew up in a home with a father who, as a boy, escaped from Germany and the tyrannical rule of Adolf Hitler and a mother whose family survived the oppressive rule of czars in Russia. His mother and father grew up to become scientists and met while studying, later marrying and producing a family. Rabbi Cahn recounted attending synagogue and Hebrew school as a child, but turning to atheism at the age of eight because he failed to see God in action in the lives of people and leaders in the temple. Certainly not the way He manifested and made himself known to the prophets of ancient times.

Years later and still dissatisfied, he turned from the life of an atheist and when he was 13, started studying and reading books about religion, science, the occult and UFOs. One book, in particular, stood out to him because the image on the cover resembled a UFO. That book, “The Late Great Planet Earth,” by Hal Lindsay transformed his entire outlook and inspired him to study Old Testament prophecies about the Messiah returning, and comparing those teachings with Christian doctrines about the second coming of Jesus.

As he continued studying and growing, and even inspiring the friends he talked to, to turn to God, the Rabbi still found himself reluctant to make the same commitment. He made a deal with God that if the Almighty granted him a long life, he would surrender when on his death bed. After that, he was in a car crash with a friend and later, a nighttime wreck with a train that demolished his Ford Pinto but, amazingly, left him without a scratch. Still a young man, the frightful incidents caused him to change his deal with God and he vowed he would turn over his life when he reached 20, which he did. That started his journey into life as a Jewish Christian who ever strives to move only as the Spirit directs.

I Peter 2:9 NIV But you are a chosen people, a royal priesthood, a holy nation, God’s special possession, that you may declare the praises of him who called you out of darkness into his wonderful light.

Proverbs 18:24 KJV A man that hath friends must shew himself friendly: and there is a friend that sticketh closer than a brother.

Proverbs 17:17 KJV  A friend loveth at all times, and a brother is born for adversity.

John 15:15 NKJV No longer do I call you servants, for a servant does not know what his master is doing; but I have called you friends, for all things that I heard from My Father I have made known to you.

I Corinthians 1:22 KJV For the Jews require a sign, and the Greeks seek after wisdom:

Lamentations 3:23 NCV They are new every morning;  Lord, your loyalty is great.

John 11:50 KJV Nor consider that it is expedient for us, that one man should die for the people, and that the whole nation perish not.

Romans 6:23 KJV For the wages of sin is death; but the gift of God is eternal life through Jesus Christ our Lord.

Isaiah 5:20 KJV Woe unto them that call evil good, and good evil; that put darkness for light, and light for darkness; that put bitter for sweet, and sweet for bitter!

John 3:20 KJV For every one that doeth evil hateth the light, neither cometh to the light, lest his deeds should be reproved.

Joshua 6:4 KJV And seven priests shall bear before the ark seven trumpets of rams’ horns: and the seventh day ye shall compass the city seven times, and the priests shall blow with the trumpets.

Numbers 3:9 KJV And thou shalt give the Levites unto Aaron and to his sons: they are wholly given unto him out of the children of Israel.