Pastor Jim & Lori Bakker and Tammy Sue Bakker discuss the importance of family for Day 3 on The Jim Bakker Show. 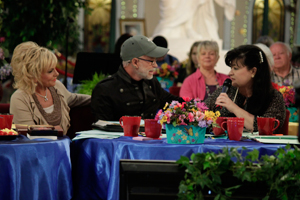 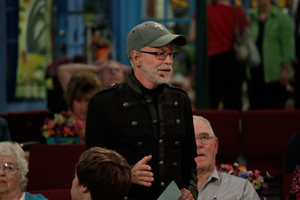 “The two key words of the book of Revelation: see and hear.” – Pastor Jim Bakker 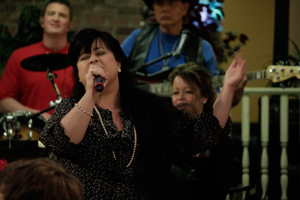 Pastor Jim focused on the trumpets of Revelation and said the first is about to sound, and according to the Bible, will come with fiery hailstorms that burn up a third of the earth, the foliage and the trees. The Bakker’s daughter, Maricela Bakker Woodall, was called in front of the camera to tell of a dream she recently had. She received it the same night her parents both had troubling and symbolic dreams of their own.

Maricela explained that in her dream she saw hundreds of thousands of people involved in their normal everyday routines and then, all of a sudden, she heard and saw multiple explosions and bombings taking place outdoors. Some people ran, while others stood still. Next, a giant wave rose up and the fear that took over many people paralyzed them and prevented them from reacting or moving to safety. Maricela said God told her to run to the highest place she could reach and as she did, she remembers the cries and screaming of numbers of others running for their lives.

Pastor Jim shared that was the first time he heard the dream in its entirety and then went on to offer his interpretation of it. The higher ground, he said, represented the place where Jesus could be found. The explosions were meteor showers exploding like bombs. He then referenced a recent news story about explosive meteors and fireballs traveling over Nevada and California. He said that if an asteroid ever hits an ocean, it will cause a tsunami like the one Maricela saw in her dream.

He said the prophet John wrote down what was shown to him in vision, but probably had no idea about meteor storms. Pastor Jim shared that he believes a meteor shower is what the prophet described in Revelation 8:7 when he saw hailstones of fire descending on the earth. Few want to consider that such a reality could ever manifest and the Pastor said this is why no one in the church wants to hear about such things. Some pastors, he continued, even have a fear about preaching what Revelation actually is revealing.

Pastor Jim went on to say that he fears for the church today because there appears to be more emphasis on judging and being critical of others than on coming together and uniting to serve and assist each other during the last days. He reminded that it was religious people who called for the death of Jesus and that church people are the ones who came against the Bakker family years ago. He said he learned in prison that he had to forgive all those who hurt, or worked against, him in order for him to receive continued guidance from God. He stressed the importance of forgiveness and its role in enabling people to continue progressing on the path of God in their lives.

Ephesians 1:5 KJV Having predestinated us unto the adoption of children by Jesus Christ to himself, according to the good pleasure of his will,

Acts 2:17 KJV And it shall come to pass in the last days, saith God, I will pour out of my Spirit upon all flesh: and your sons and your daughters shall prophesy, and your young men shall see visions, and your old men shall dream dreams:

II Timothy 4:3 KJV For the time will come when they will not endure sound doctrine; but after their own lusts shall they heap to themselves teachers, having itching ears;

Acts 2:21 KJV And it shall come to pass, that whosoever shall call on the name of the Lord shall be saved.

Matthew 6:15 KJV But if ye forgive not men their trespasses, neither will your Father forgive your trespasses.

Matthew 7:1 KJV Judge not, that ye be not judged.

I John 3:14 KJV We know that we have passed from death unto life, because we love the brethren. He that loveth not his brother abideth in death.

Matthew 18:35 KJV So likewise shall my heavenly Father do also unto you, if ye from your hearts forgive not every one his brother their trespasses.

John 18:40 KJV Then cried they all again, saying, Not this man, but Barabbas. Now Barabbas was a robber.

Matthew 6:15 NKJV But if you do not forgive men their trespasses, neither will your Father forgive your trespasses.