Pastor Jim & Lori Bakker and Tammy Sue Bakker discuss the Power of the Tongue for Day 1 on The Jim Bakker Show. 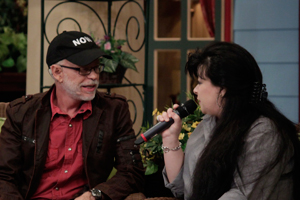 When He Was On The Cross, I Was On My Mind 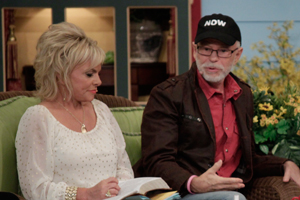 “God wants to talk to us if we would just listen. We’ve got to hear from God.” – Pastor Jim Bakker 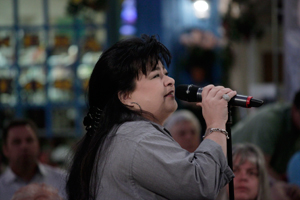 “The power of the tongue; it can kill, steal and destroy a life.” – Tammy Sue Bakker

Pastor Jim and Lori Bakker welcomed guests Tammy Sue Bakker and Kevin Shorey. Pastor Jim’s message centered around the topic of “Hearing from God,” a subject inspired by the fact that recently he, Lori and one of their daughters all had shocking and disturbing dreams that he believes contain a message from God about things set to happen very soon. He said not all dreams come from God, but that God sometimes allows repetition of things, or re-occurrences, as a sign of His message. “Everybody in the Bible heard from God,” he said, running down a lengthy list of prophets the Bible says talked with the Lord or received words from him. He went on to explain that he intends to have today’s prophets and teachers on the show and preaching at Morningside because “God still wants to talk to us today.”

Tammy Sue shared that she believes in waiting to hear from God before making moves in life and said it was by inspiration that she decided to return to singing by making a surprise visit to her father’s show. She allowed many things, over the years, to serve as excuses for not returning to ministering through song, including self consciousness about her weight, fear of what other people would say about her and a deep seated fear and terror that plagued her as a result of the hurtful things that came out of the mouths of others over the years. She wondered if she was good enough. One day, however, she decided that she had to face her fears and appear on the show.

She nearly cried while recalling the cruel things people said to her over the years about her parents and family. She urged listeners to remember the power of the tongue and how things spoken can have long lasting effects. Lori then told the story of how a man verbally accosted Pastor Jim at an airport after noticing the couple’s luggage had apparently been run over and handled roughly. The man told the Pastor he deserved it because of the way he had mistreated people over the years. Lori’s first reaction was anger but Pastor Jim said he had to learn that what other people said carried little weight. “We’ve all made mistakes,” he said, while stressing the need to remember God’s grace. He shared that God led him to see that if Christians reject His grace, they lack the ability to give grace to others.

He gave the example of his son Jaime Charles who declines to appear on the show with Pastor Jim because the younger Bakker, who also ministers, says many Christians dislike him and the spiritual message he teaches. The Pastor said his son preaches grace to the extreme, but added that he still loves and accepts him as his son. “But you’re my son,” Pastor Jim told him, expressing the same love to his child that God shares with His own children who stray from the path for a time and then return. He reiterated that not one will make it without grace.

Exodus 33:9 KJV And it came to pass, as Moses entered into the tabernacle, the cloudy pillar descended, and stood at the door of the tabernacle, and the Lord talked with Moses.

Genesis 15:1 KJV After these things the word of the Lord came unto Abram in a vision, saying, Fear not, Abram: I am thy shield, and thy exceeding great reward.

II Samuel 7:4 KJV And it came to pass that night, that the word of the Lord came unto Nathan, saying,

I Kings 18:1 KJV And it came to pass after many days, that the word of the Lord came to Elijah in the third year, saying, Go, shew thyself unto Ahab; and I will send rain upon the earth.

I Chronicles 11:3 KJV Therefore came all the elders of Israel to the king to Hebron; and David made a covenant with them in Hebron before the Lord; and they anointed David king over Israel, according to the word of the Lord by Samuel.

II Chronicles 22:8 KJV And it came to pass, that, when Jehu was executing judgment upon the house of Ahab, and found the princes of Judah, and the sons of the brethren of Ahaziah, that ministered to Ahaziah, he slew them.

Psalm 107:20 KJV He sent his word, and healed them, and delivered them from their destructions.

Isaiah 9:8 KJV The Lord sent a word into Jacob, and it hath lighted upon Israel.

Isaiah 16:13 KJV This is the word that the Lord hath spoken concerning Moab since that time.

Jeremiah 23:28 KJV The prophet that hath a dream, let him tell a dream; and he that hath my word, let him speak my word faithfully. What is the chaff to the wheat? saith the Lord.

Ezekiel 1:3 KJV The word of the Lord came expressly unto Ezekiel the priest, the son of Buzi, in the land of the Chaldeans by the river Chebar; and the hand of the Lord was there upon him.

Hosea 1:2 KJV The beginning of the word of the Lord by Hosea. And the Lord said to Hosea, Go, take unto thee a wife of whoredoms and children of whoredoms: for the land hath committed great whoredom, departing from the Lord.

Jonah 1:1 KJV Now the word of the Lord came unto Jonah the son of Amittai, saying,

Jonah 3:1 KJV And the word of the Lord came unto Jonah the second time, saying,

Micah 1:1 KJV The word of the Lord that came to Micah the Morasthite in the days of Jotham, Ahaz, and Hezekiah, kings of Judah, which he saw concerning Samaria and Jerusalem.

Haggai 1:1 KJV In the second year of Darius the king, in the sixth month, in the first day of the month, came the word of the Lord by Haggai the prophet unto Zerubbabel the son of Shealtiel, governor of Judah, and to Joshua the son of Josedech, the high priest, saying,

Zechariah 1:1 KJV In the eighth month, in the second year of Darius, came the word of the Lord unto Zechariah, the son of Berechiah, the son of Iddo the prophet, saying,

Hebrews 11:8 KJV By faith Abraham, when he was called to go out into a place which he should after receive for an inheritance, obeyed; and he went out, not knowing whither he went.

Proverbs 18:21 KJV Death and life are in the power of the tongue: and they that love it shall eat the fruit thereof.

Ephesians 4:32 KJV And be ye kind one to another, tenderhearted, forgiving one another, even as God for Christ’s sake hath forgiven you.

Matthew 7:1 KJV Judge not, that ye be not judged.

Proverbs 26:27 KJV Whoso diggeth a pit shall fall therein: and he that rolleth a stone, it will return upon him.

Ephesians 2:8-9 KJV For by grace are ye saved through faith; and that not of yourselves: it is the gift of God: Not of works, lest any man should boast.

Ephesians 4:32 KJV And be ye kind one to another, tenderhearted, forgiving one another, even as God for Christ’s sake hath forgiven you.

Philippians 3:10 KJV That I may know him, and the power of his resurrection, and the fellowship of his sufferings, being made conformable unto his death;

Isaiah 53:5 NKJV But He was wounded for our transgressions, He was bruised for our iniquities; The chastisement for our peace was upon Him, And by His stripes we are healed.