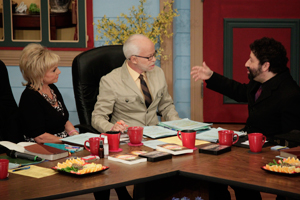 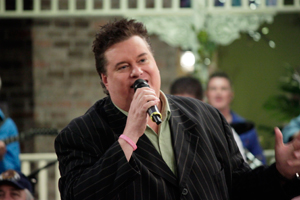 “Anybody that knows history and knows the Middle East, knows when you go in and free a nation, there’s a group of people waiting to take over. It was just announced last week, the Muslim Brotherhood is the number one political power in Egypt.” -Pastor Jim Bakker 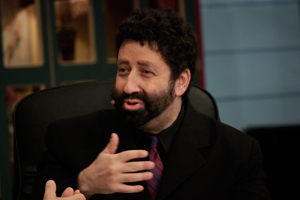 “Anybody who believes in the word will stand with Israel.” -Pastor Jim Bakker

“Curses come on any country that turns its back on Israel.” – Pastor Jim Bakker

Pastor Jim and Lori welcomed returning guest Rabbi Jonathan Cahn, author of “The Harbinger,” and musical guest Kevin Shorey. Pastor Jim began by making mention of current events in the Middle East and how it seems all nations are against Israel, which is the size of New Jersey.  Rabbi Cahn noted that the fact that Jewish people still exist after years of opposition in various countries, bears witness to God’s existence. Without His hand of protection, he said, annihilation of the people would have taken place long ago. He went on to say that the Bible reveals that peace is something that will continue to elude the nation-state and that Israel will suffer more attacks and will fight back against them. The Rabbi noted that a new enemy of the country has emerged in every generation.  Pastor Jim then reminded why the Bible tells Christians to pray for Jerusalem and said America’s security and peace depend on the status of her relationship with Israel.

The Rabbi noted that both countries have troubled relationships with God right now and that the only true security in these times lies in abiding in God’s will and trusting Yeshua, the Hebrew word for Lord which means salvation and safety. He added that if America refuses to repent and turn from her rebelliousness and rejection of God, she will suffer the removal of her crown as the head of the nations. Should that happen, the America the world knows will come to a complete end.

Pastor Jim warned that the church and America sit in very precarious positions, with believers following a deceptive gospel of prosperity and the country rejecting God’s commands more and more each day. Some Christians, he said, also reject religious teachings that focus on God’s chastisement and admonitions, choosing instead to embrace a “user-friendly” gospel. With many lost in deception, he commented that the strange thing about that is that the deceived have no idea that they have been led astray. He suggested believers stop taking everything preachers say for granted and take the time to study the Bible and verify everything their teachers present to them.

Zechariah 12:2 KJV Behold, I will make Jerusalem a cup of trembling unto all the people round about, when they shall be in the siege both against Judah and against Jerusalem.

Genesis 12:3 KJV And I will bless them that bless thee, and curse him that curseth thee: and in thee shall all families of the earth be blessed.

Psalm 122:6 KJV Pray for the peace of Jerusalem: they shall prosper that love thee.

Psalm 121:4 KJV Behold, he that keepeth Israel shall neither slumber nor sleep.

Proverbs 18:10 KJV The name of the Lord is a strong tower: the righteous runneth into it, and is safe.

Exodus 20:3 KJV Thou shalt have no other gods before me.

II Thessalonians 2:11 KJV And for this cause God shall send them strong delusion, that they should believe a lie:

Matthew 24:12 KJV And because iniquity shall abound, the love of many shall wax cold.

Matthew 6:24 KJV No man can serve two masters: for either he will hate the one, and love the other; or else he will hold to the one, and despise the other. Ye cannot serve God and mammon.

III John 1:2 KJV  Beloved, I wish above all things that thou mayest prosper and be in health, even as thy soul prospereth.

Romans 1:10 KJV Making request, if by any means now at length I might have a prosperous journey by the will of God to come unto you.

Luke 10:27 NCV  The man answered, “Love the Lord your God with all your heart, all your soul, all your strength, and all your mind.” Also, “Love your neighbor as you love yourself.”

Hebrews 12:6 KJV For whom the Lord loveth he chasteneth, and scourgeth every son whom he receiveth.