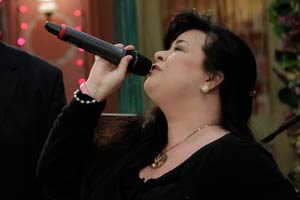 Holy Spirit, Thou Art Welcome/There’s Just Something About That Name 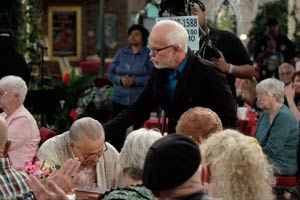 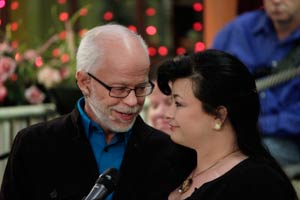 “You may run out of gas, but God’s not gonna.” – Pastor Jim Bakker

Pastor Jim and Lori Bakker welcome guest Tammy Sue Bakker, joined on the panel by Kevin Shorey, Zach Drew, Sasha Volz and James Chapman. Pastor Jim used the show to focus on praying for the sick and seeking God’s healing in the lives of the afflicted. He shared that many years have gone by since he last conducted a healing ceremony and recalled his first one occurred during his years in Bible School. Pastor Jim was very overjoyed about his daughter Tammy Sue visiting Morningside.  He felt God led her there. He said he believed that more than 1000 individuals would experience healing as his daughter sang “The Blood.”

He noted that his prayers now include requests that his daughter move to the area to help him with the ministry. “She knows how,” he declared, while reminding the listeners that God restores and brings people back from trouble and adversity. Tammy Sue took a break from her singing ministry after the death of her mother and refrained from singing in public until a surprise visit to her father’s show a few weeks ago. That unexpected appearance caused Pastor Jim to break down in tears, as he had prophesied previously that his daughter would sing again one day. He just never knew that her return would occur in the way that it did.

He took time to reminisce about her birth and growing up on the set of The PTL Club, regularly coming to the studio with her mother starting at two weeks old. Regular viewers and supporters of the ministry watched her mature right before their eyes, using her God-given anointing to touch hearts through her songs. Pastor Jim recalled her first album entitled “Sixteen,” which was her age at the time of its release. As a mature woman, he recounted how she ran the ministry while he served out his prison term.“She’s a mini me,” he said, quickly adding that the only difference between them lies in the fact that his gifts do not include the ability to sing.

During the show, he prayed for the healing of those suffering from migraines, gastrointestinal and heart conditions, foot disorders, neck and shoulder pain and other ailments. His renewed focus on healing also stems from the negative effects of stress that he felt over recent attacks on Lori’s House. He said he almost suffered a stroke and had to remember to cast all his burdens on the Lord and let God handle the matter according to His plan and purpose.

James 5:16 KJV Confess your faults one to another, and pray one for another, that ye may be healed. The effectual fervent prayer of a righteous man availeth much.

Matthew 18:19 KJV Again I say unto you, That if two of you shall agree on earth as touching any thing that they shall ask, it shall be done for them of my Father which is in heaven.

Mark 1:27 KJV And they were all amazed, insomuch that they questioned among themselves, saying, What thing is this? what new doctrine is this? for with authority commandeth he even the unclean spirits, and they do obey him.

Matthew 8:16 KJV When the even was come, they brought unto him many that were possessed with devils: and he cast out the spirits with his word, and healed all that were sick:

I Peter 2:24 KJV Who his own self bare our sins in his own body on the tree, that we, being dead to sins, should live unto righteousness: by whose stripes ye were healed.

Isaiah 53:5 KJV But he was wounded for our transgressions, he was bruised for our iniquities: the chastisement of our peace was upon him; and with his stripes we are healed.

Hebrews 9:22 KJV And almost all things are by the law purged with blood; and without shedding of blood is no remission.

Mark 11:24 KJV Therefore I say unto you, What things soever ye desire, when ye pray, believe that ye receive them, and ye shall have them.

Romans 1:16 KJV For I am not ashamed of the gospel of Christ: for it is the power of God unto salvation to every one that believeth; to the Jew first, and also to the Greek.

Romans 10:15 KJV And how shall they preach, except they be sent? as it is written, How beautiful are the feet of them that preach the gospel of peace, and bring glad tidings of good things!

Hebrews 4:15 KJV For we have not an high priest which cannot be touched with the feeling of our infirmities; but was in all points tempted like as we are, yet without sin.

One thought on “Obedience to God”