Pastor Jim & Lori Bakker and Tammy Sue Bakker discuss the importance of family for Day 1 on The Jim Bakker Show. 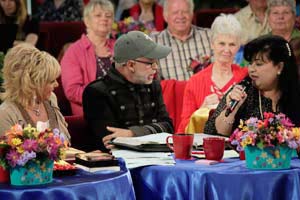 I Go To The Rock 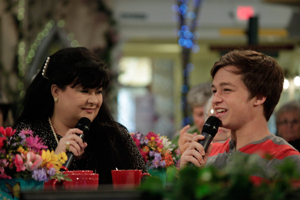 “Let God come into your life. You may feel like an atomic bomb has dropped into your family. That’s how we felt. Everything was scattered over the world. One by one, God’s bringing us all back together again.” – Pastor Jim Bakker

“I feel more at home here [at Morningside] and more like I’m back home, than I’ve ever felt in my life.” Tammy Sue Bakker

Pastor Jim and Lori Bakker welcomed Tammy Sue Bakker and musical guest Kevin Shorey as the Bakker family reunion continued. Pastor Jim repeatedly expressed his joy that his daughter was with him at Morningside and spending days rehearsing with the band and strengthening her voice. Tammy Sue praised the band as one of the best she ever worked with, prior to singing two selections with them, “I Go to the Rock” and a doo-wop version of “Amazing Grace.”

Her father recounted events from the days of her youth, starting from when she first appeared on TV at the age of two weeks. Tammy Sue then shared how she grew up at Heritage USA, the place where she went to church and school, where she skated, had her first boyfriend and had many great experiences.

She went on to compare her return to singing at Morningside to the restoration her father experienced in building it. She called it a “100 percent miracle” that he was used of God to build a second ministry, after the demise of the first. “Don’t ever give up on yourself,” she told viewers. Her son, James Chapman, used the word “surreal” to describe his feelings when seeing his mother walking through the streets and buildings of Morningside. Pastor Jim said his daughter knows him so well and how he receives great comfort from her being present and so near to him again.

Later, he went on to briefly mention the terrible dreams he and Lori had on the same night that “shook them to the core.” Tammy Sue added that a band member had also had a disturbing dream, while Kevin Shorey revealed he had a restless night of sleep and knew it was a sign that something significant was about to happen. Pastor Jim said his dream was about tornadoes, but that he found some comfort despite the disaster when he saw Lori’s House protected because of its construction in the cleft of a solid rock. The lower part of the home, he said, will serve as a tornado shelter for the home’s residents and those in the village. He compared it to how Jesus is a shelter for the faithful in times of spiritual storms. Pastor Jim then encouraged the audience to prepare and stock up on food and other survival items, like the Fuel-less Generator, made available through the ministry.

One thought on “Family”