Pastor Jim & Lori Bakker and the Students of Master’s Media discuss Daniel 7 for Day 2 on The Jim Bakker Show. 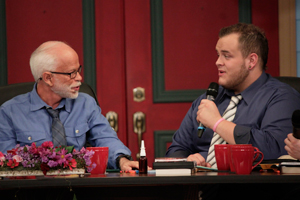 “God will turn your mess into a message.” -Pastor Jim Bakker 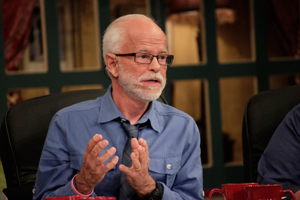 The name Beelzebub means lord of the flies. Flies are a nasty creatures and will land on waste and then on people’s food. 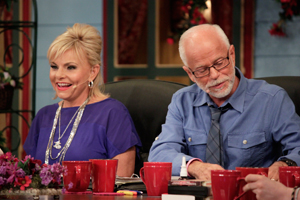 The Lord used the term as a name to describe Satan to describe his vile nature. The sad thing is, as vile and nasty as the devil is, more children are turning to worship him rather than Jesus. The children of today are playing with things that are of the devil because they think they are cool. The Goth looks as well as Ouija boards are a popular way for children to be entertained by demonic forces. Movies are another arena for children to become enthralled with the dark side.

Pastor Jim is unsettled by the amount of people that do not care about each other and furthermore do not have any love for one another. A Christian, when they come to Christ, comes out of love and their relationship with God allows the love to further develop and extend toward others. In the book of Daniel, way before the book of Revelation was ever written, God was perplexed about the same things that we are concerned about today.

The recent weather bouts further prove the validity of God’s Holy Word. We are one drought, one flood and one season away from famine in the land. In the book of Matthew, it tells us that famine will happen along with earthquakes in diverse places. There will be many times that there will be no food to eat. We are going to have a great awakening in this country and the world. That’s why preparation is of the utmost importance. When there is no food at the grocery stores and no way to cook, having alternative sources will be important. Surely we are living in the last days.

The mark of the beast, or 666, will soon be introduced. With all the high tech advances, we are moving toward the one world government. The mark of the beast will soon make all transactions impossible if the person does not have this mark on their right hand or forehead. The mark will be the size of a pin head, when read and studied in the Hebrew. The Book of Revelation says that a person will not be able to buy or sell if they do not have this mark. If there is any chance that the bible could be true and what Jesus said is real, America needs to wake up.

The church of today’s society wants user friendly religion. They want to be able to make the crowds happy and be sure not to upset anyone for fear of losing them. The fact of the matter is, the Bible is not always pleasant. The word of God is sharper than a two edged sword. Churches are getting away from preaching the Book of Revelation, in an effort to grow the numbers in the church rather than telling the people the way it is.

While the end times are a gloom and doom teaching, there is good hope for the church. Daniel was troubled even writing these things for today’s church, but he knew what was coming as a prophet of God. In Daniel’s spirit, he knew that God was in control and the saints would be okay. However, he had to warn them of the upcoming calamities. The end of the book, or the Bible, ends well for the saint of God. The children of God will live with him forevermore and he will wipe away all the tears from our eyes. It will be like the Garden of Eden before sin. He will return everything back to the way it was before sin. Do not fear God is in control!

Ephesians 4:27 KJV Neither give place to the devil.

Mark 3:29 KJV But he that shall blaspheme against the Holy Ghost hath never forgiveness, but is in danger of eternal damnation.

I John 3:14 KJV We know that we have passed from death unto life, because we love the brethren. He that loveth not his brother abideth in death.

Daniel 7:1-2 KJV In the first year of Belshazzar king of Babylon Daniel had a dream and visions of his head upon his bed: then he wrote the dream, and told the sum of the matters. Daniel spake and said, I saw in my vision by night, and, behold, the four winds of the heaven strove upon the great sea.

Daniel 7:4 KJV The first was like a lion, and had eagle’s wings: I beheld till the wings thereof were plucked, and it was lifted up from the earth, and made stand upon the feet as a man, and a man’s heart was given to it.

Daniel 7:13-14 KJV I saw in the night visions, and, behold, one like the Son of man came with the clouds of heaven, and came to the Ancient of days, and they brought him near before him. And there was given him dominion, and glory, and a kingdom, that all people, nations, and languages, should serve him: his dominion is an everlasting dominion, which shall not pass away, and his kingdom that which shall not be destroyed.

Daniel 7:17-18 KJV These great beasts, which are four, are four kings, which shall arise out of the earth. But the saints of the most High shall take the kingdom, and possess the kingdom for ever, even for ever and ever.

Daniel 7:19 KJV Then I would know the truth of the fourth beast, which was diverse from all the others, exceeding dreadful, whose teeth were of iron, and his nails of brass; which devoured, brake in pieces, and stamped the residue with his feet;

Daniel 7:23-25 KJV Thus he said, The fourth beast shall be the fourth kingdom upon earth, which shall be diverse from all kingdoms, and shall devour the whole earth, and shall tread it down, and break it in pieces. And the ten horns out of this kingdom are ten kings that shall arise: and another shall rise after them; and he shall be diverse from the first, and he shall subdue three kings. And he shall speak great words against the most High, and shall wear out the saints of the most High, and think to change times and laws: and they shall be given into his hand until a time and times and the dividing of time.

Daniel 7:25 NCV This king will speak against the Most High God, and he will hurt and kill God’s holy people. He will try to change times and laws that have already been set. The holy people that belong to God will be in that king’s power for three and one-half years.

Revelation 13:16-17 KJV And he causeth all, both small and great, rich and poor, free and bond, to receive a mark in their right hand, or in their foreheads: And that no man might buy or sell, save he that had the mark, or the name of the beast, or the number of his name.

Philippians 2:7 KJV But made himself of no reputation, and took upon him the form of a servant, and was made in the likeness of men:

Matthew 5:45 KJV That ye may be the children of your Father which is in heaven: for he maketh his sun to rise on the evil and on the good, and sendeth rain on the just and on the unjust.

Revelation 12:10 KJV  And I heard a loud voice saying in heaven, Now is come salvation, and strength, and the kingdom of our God, and the power of his Christ: for the accuser of our brethren is cast down, which accused them before our God day and night.

Daniel 7:26 KJV But the judgment shall sit, and they shall take away his dominion, to consume and to destroy it unto the end.

Daniel 7:27-28 KJV And the kingdom and dominion, and the greatness of the kingdom under the whole heaven, shall be given to the people of the saints of the most High, whose kingdom is an everlasting kingdom, and all dominions shall serve and obey him.Hitherto is the end of the matter. As for me Daniel, my cogitations much troubled me, and my countenance changed in me: but I kept the matter in my heart.

Revelation 21:4 KJV And God shall wipe away all tears from their eyes; and there shall be no more death, neither sorrow, nor crying, neither shall there be any more pain: for the former things are passed away.

One thought on “Daniel 7”