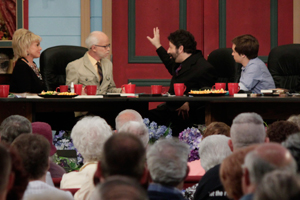 “Loris’s house is so important, I believe, as a beginning of a revival to save babies. If American turns away from killing its children, I believe we can heal our land.” -Pastor Jim Bakker 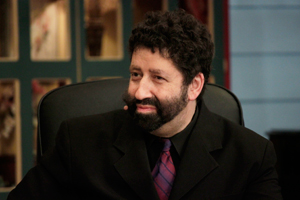 “The thing that is a curse against America is abortion. God does not love murder.” -Pastor Jim Bakker 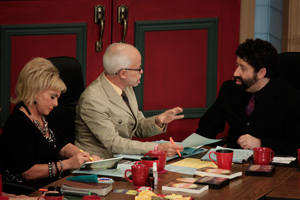 “God is watching us to see what we are doing. He wants us to rise up and keep doing what you [Pastor Jim] are doing and God is going to do greater things in your lives.” -Pastor Rabbi Cahn

A petition was sent around to stop the construction of Lori’s house. The Bakker’s are truly saddened as to why people would want to stop such a wonderful blessing to the community. The entire premise for this house is to save babies and to help women not to become victims of abortion.

The location for Lori’s house had to be moved. The Lord is still making a way, as they will not be detoured from this miraculous work. The new location is sitting right in front of a rippling stream, which is the prime opportunity for a peaceful place to rest and put their lives back together. Various saints have approached Lori and said that they wanted to pray and surround the area where the home is to be built, with the anointing of God. As a project that is reaching out to the broken and those who are hurting, the prayers of a righteous man avails much. Anyone who wants to circle the property and pray is welcome. A woman of destiny is a term used a lot, but it is really about being a woman of dignity. Lori’s house is to help women restore dignity to those who have lost it.

Today Rabbi Jonathan Cahn joins the village of Morningside. As a dear friend of Pastor Jim and Lori Bakker, he has a direct message from God that the congregation must hear. The Lord continues to give new and fresh words to Rabbi Cahn every single day. As an advanced studier of end time bible prophecy, he is excited to dive into what God has given him. He is having a conference at Morningside, in July, which will veer away from The Harbinger and speak the other words that God has given him. As someone who communicates on a daily basis with God, he has strong words of warning for the church concerning the last days.

Rabbi Cahn shares a powerful story regarding his congregation losing their building. In a desperate search to find a home for his church, he wandered into a department store. He was met by the owner of the building and told to come into the office. The owner had seen the Rabbi and his friend in a dream. It seemed like it was meant to be, but all the forces of hell came against the Rabbi to keep his congregation out of this place. Down to the wire and no place to go, the last service on the Feast of Tabernacles, Rabbi still believed for his miracle. They celebrated, even though they knew this may be the last service for this congregation with no building. The very next day, the town that voted to keep them out, re-voted and approved the congregation to move into the new space.

On 9/11 nobody could have put together the things that are revealed in the Harbinger. President Obama even played into the hands of Bible prophecy, as he instructed the people that we would rebuild American. As Bible prophecy continues to unfold, we as Christians need to rise up and become aware of what is truly going on around us.

Deuteronomy 19:15 NKJV “One witness shall not rise against a man concerning any iniquity or any sin that he commits; by the mouth of two or three witnesses the matter shall be established.

II Corinthians 13:1 KJV This is the third time I am coming to you. In the mouth of two or three witnesses shall every word be established.

Isaiah 9:9 KJV And all the people shall know, even Ephraim and the inhabitant of Samaria, that say in the pride and stoutness of heart,

Matthew 23:39 KJV For I say unto you, Ye shall not see me henceforth, till ye shall say, Blessed is he that cometh in the name of the Lord.