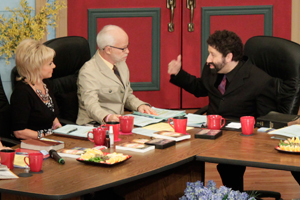 “That’s the mystery of the church: The church is really spiritually Jewish, but it hasn’t known it for so long.” -Rabbi Jonathan Cahn 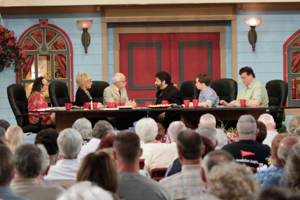 “The Jewish people came into existence for the purpose of blessing the Gentiles.” – Rabbi Jonathan Cahn 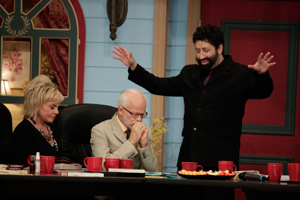 Pastor Jim and Lori Bakker welcomed back Rabbi Jonathan Cahn for Day 8 of his special message. The subject of the day’s program related to the Mystery of Ruth and The Ruth Code.

Rabbi Cahn went into detail about the symbolism contained in the book of Ruth, which paints a picture, not only of the relationship between God and Israel, but also the church bringing together and unifying Jews and Gentiles. The Rabbi explained that Ruth, a Gentile woman, chose to cling to her mother-in-law Naomi, a Jew. Even though of different lineage, Ruth went on to marry Boaz, a Jewish man, bore children, including Obed, the father of Jesse and the grandfather of the great prophet David. This same family line produced the family of Jesus, in later generations.

Many mysteries lie in code in the book of Ruth, a fact made clear as Rabbi Cahn explained the meanings of certain Hebrew words such as “go’el,” which means “redeemer” in Ruth 3:9, but more specifically signifies one who redeems by marrying. The word describes Boaz taking Ruth under his wing in marriage, but also, symbolically represents how Christ loves and protects the church, His bride. The union of Jew and Gentile in this Old Testament story gives a glimpse into what takes place prior to the end of the age. The Rabbi stated that the enemy knows the time for redemption has come when Jews and Gentiles start coming together and the walls that previously divided them come tumbling down.

Pastor Jim noted how this very thing is happening as more Christians embrace Jews and the state of Israel as well as the increasing numbers of Jews accepting the Jesus as their Messiah and Lord. He went on to stress the importance of believers standing with Israel and admonished that doing so comprises the very essence of their spiritual salvation. Pastor Jim said the nation of Israel formed when he was eight years old and, at that time, no one knew of Jews and Gentiles worshiping together. Today, the unfolding of a different story has those historic walls of division disappearing. The Rabbi likened today’s events to a reliving of the book of Acts where the Holy Spirit descended on Jews and Gentiles alike, creating a new chosen people based on the spirit, rather than on physical and genetic lineage.

Prior to the end of the show, Rabbi Cahn gave a special Hebrew blessing, in the tradition of his forefathers, on Pastor Jim, Lori and all of Morningside’s visitors and viewers.

Matthew 5:14 KJV Ye are the light of the world. A city that is set on an hill cannot be hid.

Isaiah 54:5 KJV For thy Maker is thine husband; the Lord of hosts is his name; and thy Redeemer the Holy One of Israel; The God of the whole earth shall he be called.

Ruth 1:3-4 KJV And Elimelech Naomi’s husband died; and she was left, and her two sons. And they took them wives of the women of Moab; the name of the one was Orpah, and the name of the other Ruth: and they dwelled there about ten years.

Ruth 1:10 KJV And they said unto her, Surely we will return with thee unto thy people.

Ruth 1:12 KJV Turn again, my daughters, go your way; for I am too old to have an husband. If I should say, I have hope, if I should have an husband also to night, and should also bear sons;

Ruth 1:15-17 KJV And she said, Behold, thy sister in law is gone back unto her people, and unto her gods: return thou after thy sister in law. And Ruth said, Intreat me not to leave thee, or to return from following after thee: for whither thou goest, I will go; and where thou lodgest, I will lodge: thy people shall be my people, and thy God my God: Where thou diest, will I die, and there will I be buried: the Lord do so to me, and more also, if ought but death part thee and me.

Zechariah 8:23 KJV Thus saith the Lord of hosts; In those days it shall come to pass, that ten men shall take hold out of all languages of the nations, even shall take hold of the skirt of him that is a Jew, saying, We will go with you: for we have heard that God is with you.

Ephesians 2:19 NCV Now you who are not Jewish are not foreigners or strangers any longer, but are citizens together with God’s holy people. You belong to God’s family.

Ruth 1:18 KJV When she saw that she was stedfastly minded to go with her, then she left speaking unto her.

Ruth 1:20 NCV Naomi answered the people, “Don’t call me Naomi. Call me Mara, because the Almighty has made my life very sad.

Ruth 1:22 KJV So Naomi returned, and Ruth the Moabitess, her daughter in law, with her, which returned out of the country of Moab: and they came to Bethlehem in the beginning of barley harvest.

Ruth 2:1 KJV And Naomi had a kinsman of her husband’s, a mighty man of wealth, of the family of Elimelech; and his name was Boaz.

Genesis 32:24 KJV And Jacob was left alone; and there wrestled a man with him until the breaking of the day.

Ruth 2:2 KJV And Ruth the Moabitess said unto Naomi, Let me now go to the field, and glean ears of corn after him in whose sight I shall find grace. And she said unto her, Go, my daughter.

Ruth 2:12 KJV The Lord recompense thy work, and a full reward be given thee of the Lord God of Israel, under whose wings thou art come to trust.

Ruth 2:14 KJV And Boaz said unto her, At mealtime come thou hither, and eat of the bread, and dip thy morsel in the vinegar. And she sat beside the reapers: and he reached her parched corn, and she did eat, and was sufficed, and left.

Ruth 2:19 KJV And her mother in law said unto her, Where hast thou gleaned to day? and where wroughtest thou? blessed be he that did take knowledge of thee. And she shewed her mother in law with whom she had wrought, and said, The man’s name with whom I wrought to day is Boaz.

Ruth 3:8-9 KJV And it came to pass at midnight, that the man was afraid, and turned himself: and, behold, a woman lay at his feet. And he said, Who art thou? And she answered, I am Ruth thine handmaid: spread therefore thy skirt over thine handmaid; for thou art a near kinsman.

Isaiah 54:5 KJV For thy Maker is thine husband; the Lord of hosts is his name; and thy Redeemer the Holy One of Israel; The God of the whole earth shall he be called.

Psalm 103:1 KJV Bless the Lord, O my soul: and all that is within me, bless his holy name.

Psalm 103:4 KJV Who redeemeth thy life from destruction; who crowneth thee with lovingkindness and tender mercies;

Ruth 3:9 Amplified Bible – And he said, Who are you? And she answered, I am Ruth your maidservant. Spread your wing [of protection] over your maidservant, for you are a next of kin.

Matthew 9:21 KJV For she said within herself, If I may but touch his garment, I shall be whole.

Malachi 4:2 KJV But unto you that fear my name shall the Sun of righteousness arise with healing in his wings; and ye shall go forth, and grow up as calves of the stall.

Ruth 4:9-11 KJV And Boaz said unto the elders, and unto all the people, Ye are witnesses this day, that I have bought all that was Elimelech’s, and all that was Chilion’s and Mahlon’s, of the hand of Naomi. Moreover Ruth the Moabitess, the wife of Mahlon, have I purchased to be my wife, to raise up the name of the dead upon his inheritance, that the name of the dead be not cut off from among his brethren, and from the gate of his place: ye are witnesses this day. And all the people that were in the gate, and the elders, said, We are witnesses. The Lord make the woman that is come into thine house like Rachel and like Leah, which two did build the house of Israel: and do thou worthily in Ephratah, and be famous in Bethlehem:

Ruth 4:14-15 KJV And the women said unto Naomi, Blessed be the Lord, which hath not left thee this day without a kinsman, that his name may be famous in Israel. And he shall be unto thee a restorer of thy life, and a nourisher of thine old age: for thy daughter in law, which loveth thee, which is better to thee than seven sons, hath born him.

Ruth 4:16 KJV And Naomi took the child, and laid it in her bosom, and became nurse unto it.

Romans 11:11 KJV I say then, Have they stumbled that they should fall? God forbid: but rather through their fall salvation is come unto the Gentiles, for to provoke them to jealousy.

Isaiah 53:5 KJV But he was wounded for our transgressions, he was bruised for our iniquities: the chastisement of our peace was upon him; and with his stripes we are healed.